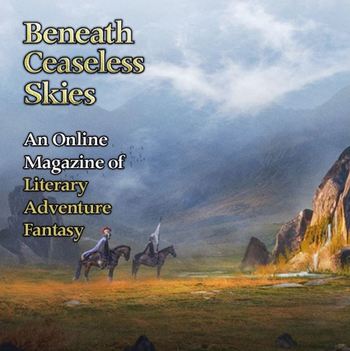 Issue #219 of Beneath Ceaseless Skies is now available, completely free on their website. It is dated February 16, 2017 and features fiction by Grace Seybold and Jeremy Sim, an Audio Fiction Podcast by Margaret Killjoy, and a reprint by Cory Skerry.

Jason at Featured Futures was enthusiastic about the Seybold.

Jeone Serrica is climbing what seems to be a world entirely of mountainside or cliff-face when, after scaring off a giant lizard, she encounters a village of strange women. After being somewhat ambivalently welcomed and despite being told to remain in her guest quarters, our intrepid explorer sneaks a peek at the villagers’ rites. What she sees mystifies and horrifies her but, before she can even try to come to terms with it, she’s snatched by a giant bird and taken off to an even stranger realm and an encounter that requires much more from her than even facing down giant lizards…

The imagination brought to bear in conceiving this doughty protagonist and this amazing world and the entities she interacts with was extremely impressive… it was fascinating throughout and will live in the memory for quite some time.

Here’s the complete Table of Contents for issue 219.

She eased herself over the edge, bare toes feeling for footholds. As in most villages, these had been deeply carved to make getting around easy, and even supplemented with metal bars in places or flat ledges for resting. Every few fathoms there was a round eyebolt for attaching a child’s tether. It was a trivial climb, and in no time Jeone was down among the trees.

“The Last Dinosaur Rider of Benessa County” by Jeremy Sim

Black Jonas secures Essie, his pleesaur, to a ring occupied by a massive, rusted droop-chain and walks down the promenade, noting the old storefronts. Brackysaur bays still line the boardwalk where land meets canal, big ol’ rectangular cutouts in the once-white stone, used for loading and unloading back in the days of the dinosaur riders.

Sal stood alone in the field, feeling the absence of her friend’s touch. Being open to death was the cost of living free.

From the Archives: “Sinking Among Lilies” by Cory Skerry

With the clawmarks as a warning, I’d slept in my clothes. 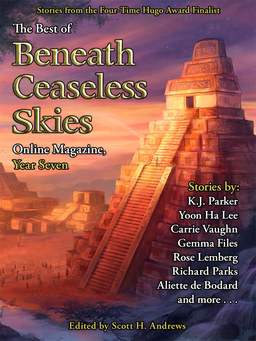 This month’s cover, “Source,” is by Florent Llamas. We last covered Beneath Ceaseless Skies with Michael Penkas’ review of issue #217.