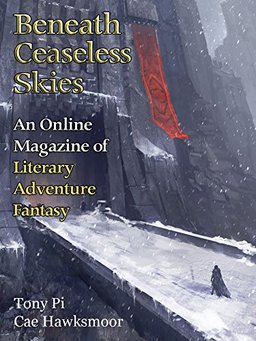 Once again, Beneath Ceaseless Skies delivers a pair of stories that convey a genuine sense of wonder by exposing the reader to ideas and imagery that they never experienced before.

It starts with “Proteus Lost” by Tony Pi, a story about the perils of shapeshifting. So often, magic in fantasy is portrayed in recipe format. Mix these ingredients with those magic words and you get a spell. In this story, we get a genuine sense of the dangers involved in casting a spell on yourself. The “spells” involve a series of conjurations written in a spell book as a list of visual riddles. Get any one riddle wrong and you end up in the wrong shape and need to work your way back to the intermediate shape where you lost your way. Tony Pi pulls off the amazing trick of making two guys sitting in a room reciting spells feel suspenseful.

Next up is “Requiem for the Unchained” by Cae Hawksmoor. I’ll be honest and say that I found the premise of this story to be rather confusing. At its heart, it’s about a captain taking a ship on a dangerous mission rather than losing it. There are old themes here about the old way of doing things being replaced by new ways and a genuinely compelling concept of a sea of ghosts. But the story seemed to have a lot of build-up before the action that didn’t clearly explain what exactly was being done. A smarter reader will probably think I’m just a slow learner, but that was my take on it.

As usual, you can read both stories (as well as a podcast recording and archived story) for free at www.beneath-ceaseless-skies.com/issues/issue-217, but these publications only survive through financial support. So why not drop ninety-nine cents and actually pay for it?

We last covered Beneath Ceaseless Skies with issue #216.

I note the issue also has a “From the Archives” feature by BG author Derek Kunskun, “The God Thieves.” Looks like a great issue!

I don’t know if I’m right but I read the second story as a world in which blimp-like things are used for commerce and travel and which must deal with storms that are caused by and composed of ghosts (nifty idea there). But the core of the plot is basically a business “deal” whose nature I can’t detail for spoilers but seemed like it was explained okay. The plot hinges on the evil business owner and the evil employee. That’s where the story fell down for me. I get that the employee has lost her wife and that her boss is evil and that the author apparently intended for her to be abrasive but I just couldn’t be interested in this woman who describes herself as liking it when the owner is surprised, “[l]ike he has found an animal that’s almost as malicious and spiteful as he is,” and later hoping something “with all [her] black and poisonous heart.”

(The first story didn’t work for me either – my notes say, “A magick most ingenious. And a disappointment.” It felt like a fragment of a novel or a story in a series (it apparently isn’t) that doesn’t stand alone. The notes conclude, “since I don’t really know or care about the two main characters or the guy they’re trying to rescue, it just doesn’t pack the tension its painstaking narration of their efforts and dangers should have.”)