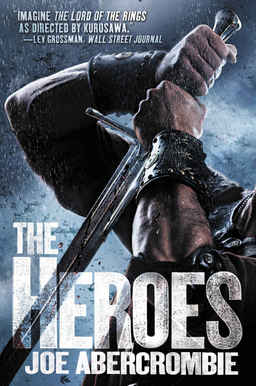 (This one is a little above 500 words because of an excerpt. Just roll with it.)

The last time I discussed Joe Abercrombie in this column, my disappointment in Best Served Cold earned a few comments from the community. (Side note: I love getting comments, so keep them coming.) You might be happy to learn that, as promised, I gave the next First Law book a chance. And I loved it.

The Heroes is everything that I appreciate from Abercrombie, including the bits that were missing from Best Served Cold. It has the same sort of darkness, openly focusing on the idea that there’s no such thing as a hero in any conflict, balanced with the rich humor that originally hooked me on Abercrombie’s work. The entire story is basically an epic battle staged over a series of days, but the action is never boring, and always does something to advance the story. What’s really interesting is several chapters where Abercrombie starts the POV on a character on one side of the conflict, who then dies at the hands of another character who takes over the POV, who then dies … and so on. Some of these characters are newly-introduced – but we’re made to care about them with a Tom Clancy-level of talent – and then suddenly a character we’re familiar with will appear, which doesn’t exactly bode well once you figure out what Abercrombie is doing.

One of my main issues with Best Served Cold was connected to characters – not an issue here. Caul Shivers, essentially a cardboard cut-out of another character previously, seems to have changed again, but this time it works. In a story where almost every character is a soldier, each one is distinct, which is not an easy task (I’ve tried). What’s especially delightful is the return of characters from the First Law trilogy, particularly mad wizard Bayaz, who continues to manipulate events; when a character doesn’t know him challenges his authority, I actually held my breath, waiting for Bayaz’s wrath. But the show-stealer for me was Bremer dan Gorst, who we last saw as the opponent of Jezal dan Luthar and later his protector when Jezal is crowned king. I’ve said before that Inquisitor Glokta from the First Law trilogy is possibly the most amusing character I’ve ever read … but damn if Gorst doesn’t come close. His criticisms of the people around him are exactly what you wish you could say to the worst people in your life, made funnier by the hopelessly pathetic existence that Gorst is trapped in.

The best examples of this have too much cursing for me to share here, but here’s one slightly-edited passage that shows what I mean, where Gorst has just found out that the love of his life is engaged to a nobleman he despises:

“Harod dan Brock,” he whispered, and the name was sand in his mouth … Brock was nauseatingly handsome, with an easy smile and a winning manner. The bastard. Well-spoken of and well-liked, in spite of his father’s disgrace. The snake. Had earned his place by bravery and bonhomie. The f*****. He was everything Gorst was not.

He clenched his right fist trembling hard, and imagined it ripping the easy-smiling jaw out of Harod dan Brock’s handsome head. “Yes.”

“We are very happy,” said Finree.

It’s those kinds of passages, in a novel that overall is spectacularly entertaining, that have earned Joe Abercrombie a spot among my top five favorite authors. With one caveat: if he’s bringing back old characters in each book, I had better see Glokta at some point soon, or I’m going to be pissed.

[…] and the occasional interview with a fellow author. My latest review of Joe Abercrombie’s The Heroes is up now, as well as my Top Ten Novels from what I read in 2016. If you enjoy this blog and think […]