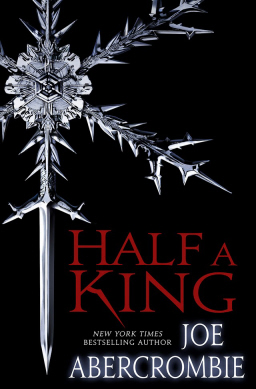 Yarvi was never meant to be King. For one thing, he’s second in line behind his older brother. For another his left hand is deformed, and because of this deformity, Yarvi has been told his entire life (mostly by his father, the current king) that he will never truly be a man. He certainly could never be King, which is fine by him. He has trained for several years to be a Minister — a skilled confidant to Kings and others in power — and will soon qualify to take the vows that will break his ties to his family and make him Brother Yarvi.

That is, until his father and older brother are killed in a battle with a neighboring King. During their funeral, Yarvi swears an oath to kill those who killed his family. During the subsequent battle, he learns his uncle murdered his father and brother. After this revelation, Yarvi is thrown from a tower window and into the sea. He is presumed dead, sold into slavery, and becomes an oarsman on a pirate ship. He must use his skills and gather allies if he hopes to fulfill his oath to avenge his father and brother.

Half a King is marketed as a YA novel. I’ve heard a lot of good things about Abercrombie and I was curious to see how an epic fantasist would do YA. Most epic fantasy readers I know love Abercrombie’s First Law trilogy, so I thought I would give this book a shot. I found it enjoyable enough to consider reading his other work, but didn’t like it enough to continue reading this series.

In terms of plot, Half a King is a “paint-by-numbers” coming of age story. Yarvi loses his family, is betrayed by someone he trusts, learns to live and survive on his own, learns skills he will need later through horrific struggle, becomes a man by the end when he (spoiler alert) completes his mission. 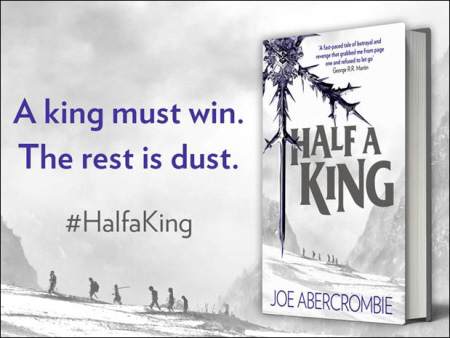 Abercrombie does a good job of worldbuilding in terms of geography, but there is very little description of the setting. While I assumed a typical medieval European setting, I could never get a good visual on the way people dressed or the castle or the pirate ship. While I’m not a fan of overly flowery, super-descriptive prose, I would have enjoyed more details to flesh out the character’s surroundings.

Speaking of characters, here Abercrombie is a little hit or miss. The female characters — Yarvi’s mother and Yarvi’s main love interest, in particular — are nuanced. However, Yarvi remained a bit of an enigma for me. I never got into his head or under his skin enough for any of the book’s events to have an emotional impact on me.

Which brings me to the biggest problem I had with the book: it felt a bit dumbed down. Admittedly, as a YA author, a huge pet peeve of mine is authors that think that writing a YA book means “talking down” to the audience or sanitizing their plot. It’s true that YA books don’t have as much sex or violence as their adult counterparts, but that doesn’t mean everything has to be stripped away. A really great example is Brent Weeks’s Night Angel trilogy: take away the concubines and the torture scenes and you have a YA adventure/coming of age story. Half a King fell a bit short in this regard.

Having said all that, I don’t want to leave you with the impression that Half a King isn’t worth your time. It is. The ending twist is quite clever. I didn’t see it coming, but at the same time, it felt right and fit the story. Abercrombie did a great job of seeding in pertinent details that, once revealed, gave me an “Aha! I should have known!” moment that I thoroughly enjoyed.

Thanks for the review. I just finished this book myself.

The only thing I really disagree with your review is your paragraph on the characters. I thought Yarvi was fleshed out very well and I was definitely emotionally impacted by the events of the story as they affected him.

Another point: I can’t really relate to your “dumbed down” critique. I admit that I haven’t read a whole lot of YA. I also haven’t read any of Abercrombie’s other works to see a comparison. But that being said, Half a King, on its own, seemed fairly mature and straightforward to me.

I found the book to be overall excellent. But perhaps my inexperience with YA just shows that my bar is far too low.

Thanks for the feedback! I’ve always said that opinions are like belly buttons–everyone has one … which means that while this book didn’t particularly work for me, it sounds like it worked for you. All we can really ask for from a book is that it takes us to another place and entertains us, and in that regard, this book succeeded.

I liked it a lot, and I have to say, the horrifically undiluted cynicism of the ending was far from dumbed down.

But, as you say, belly-buttons 🙂