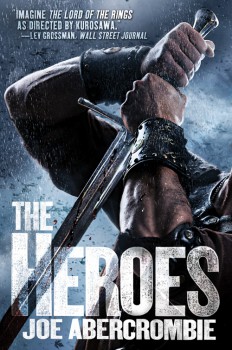 “Who cares who’s buried where?” muttered Craw, thinking about all the men he’d seen buried. “Once a man’s in the ground he’s just mud. Mud and stories. And the stories and the men don’t often have much in common.”

Although it’s classified as fantasy, don’t be fooled: Joe Abercrombie’s The Heroes is every inch a war story, knee deep in mud and blood, with the term “heroes” used in a rather ironic fashion. You won’t find any heroes here, just a bunch of men trying to live through another day on the battlefield.

It’s also bloody good. While it’s not at the level of the Pulitzer Prize-winning The Killer Angels, and perhaps doesn’t quite stand shoulder-to-shoulder in the same shieldwall as Steven Pressfield’s brilliant Gates of Fire, The Heroes is certainly one of the best books of its kind. Chock full of vivid combat and the incredible stress and strain of war, with a cast of memorable if not particularly deep characters and enough twists to keep you guessing to the end, it’s a terrific read for those who enjoy the sights and sounds of combat on the printed page.

The Heroes has a very tight focus and is thus quite easy to follow. It follows the events of a single battle fought over three days between the Union and the Northmen in the tight confines of the Valley of Osrung. While the Union are the aggressors there’s no right or wrong, and men on both sides are portrayed as just men, equally fallible. The war is the story and the subject of Abercrombie’s microscope. War is portrayed as a senseless waste of life, full of greedy exploitation and treachery, but paradoxically also a crucible in which friendships are forged and true character is often revealed. Some of the men who survive realize how lucky they are and how delicate and precious a thing peace is; others have nothing else to return to and so are inevitably drawn back into conflict, selling their sword to the highest bidder.

The Heroes was my first exposure to Abercrombie, author of The First Law Trilogy and Best Served Cold, and I can say that I found him to be a very talented author, no question. Abercrombie is a master at conveying the cold pit of fear before combat is joined, and the chaos that results from the clash of armored men. His sharp ear for dialogue and ability to create memorable characters with a few deft strokes of color make it work, too. While none of the personalities in The Heroes are completely three dimensional, every one is fun and memorable. I found it hard to close the book on the likes of aging, creaky-jointed veteran Curnden Craw, a “straight edge” who always exhorts his charges to “do the right thing,” and Colonel Bremer dan Gorst, a bullnecked, peerless fighter fallen from the graces of his lord, suffering from an unrequited with the married daughter of a Lord Marshall. One of my favorite characters is Caul Shivers, a badly scarred warrior lacking both an eye (a frightful steel ball rests in his empty socket) and a conscience, a Named Man who you definitely do not want to tangle with. But not everyone is an ultimate fighter. Prince Calder is the second son of the deposed and dead King of the North, and yearns to take his father’s place on the throne, but is a coward who pisses himself at the thought of combat. Instead of using the point of a sword he resorts to plots and schemes. And so on.

As stated earlier The Heroes scarcely qualifies as fantasy. There are no monsters, and merely one or two shadowy glimpses of mysterious magic. There are no unreal depictions of larger than life heroes; everyone is susceptible to an arrow through an eye slit or an ill-advised spear cast from the friendly ranks behind. The land in which it takes place is fictional but it feels a lot like medieval Europe, possibly late 14th century. Gunpowder is just making an appearance and just as it was in early medieval times it’s as dangerous and unpredictable to its users as its intended targets. If you like Bernard Cornwell’s ongoing The Saxon Stories or his Arthurian retelling The Warlord Trilogy chances are you’ll love The Heroes. There’s shieldwalls a-clashing, men beheaded or de-limbed by axes and swords, cavalry charges, routs and retreats, all the stuff that makes for fun, gripping reading, but Abercrombie’s accurate, sobering depictions of swords and spears meeting flesh turn your bowels to water and makes you glad to be living in the 21st century.

I’m not sure whether Abercrombie wrote The Heroes as an homage to the battle of Gettysburg, but that’s just what it is, in broad form. Like Gettysburg the battle of the Valley of Osrung is fought over three days. It features near suicidal charges at forces entrenched behind stone walls. Just as in The Killer Angels we’re introduced to several generals and battlefield leaders, some extremely competent and brave, others incompetent and bullheaded, or tentative and cowardly. The Union is from the South but is in many other respects like the Union of the Civil War, better equipped and more numerous than its foe but often terribly ill-led. The North is a ragtag group of vicious fighters that charges into battle issuing terrible cries like the Rebel Yell. The features of the battlefield remind one of Gettysburg, too, only instead of Little Round Top we get the Children and the Heroes, small hills topped by standing stones that serve as natural defensive formations, and instead of the Peach Orchard we get the Barley Field. The Heroes also includes a handsome set of maps with the units clearly positioned on the battlefield and denoted by their individual leaders, a staple of military fiction. And so on.

Abercrombie’s fiction is a part of a newer trend in fantasy and has come under criticism from some quarters as “too dark,” to the point where it’s actually earned the moniker “GrimDark.” The Heroes seems to fit that mold. It’s got the aforementioned gruesome combat. It’s also very cynical. Almost everyone can be bought and sold and very few characters seem to learn from their mistakes. Words like glory and honor are for fools, and when you die, you might get a few words before your body is tipped into the mud, to become mud itself. It is very dark, and very grim, as when Gorst muses over the corpse of a luckless boy: They think when it comes to them there will be a lesson, a meaning, a story worth telling. That death will come to them as a dread scholar, a fell knight, a terrible emperor. He poked at the boy’s corpse with a toe, rolled it onto its side, then let it flop back. Death is a bored clerk, with too many orders to fill. There is no reckoning. No profound moment. It creeps up on us from behind, and snatched us away while we shit. Curnden Craw serves as the heart of the story, a man who would like to make a new life away from the battlefield but in the end is “too coward to do aught else.” Peace and compromise are harder, and sadly, men would rather fight.

But The Heroes manages to escape from presenting a world that is entirely “nasty, brutish, and short.” Unlike George R.R. Martin or Richard Morgan Abercrombie leavens his story with sufficient humor to break up the omnipresent darkness. The Heroes also features enough likeable characters that one can cheer for. To a degree, at least. You might not want to hang out with anyone in The Heroes but it’s fun to hang with them while the novel and their short lives last.