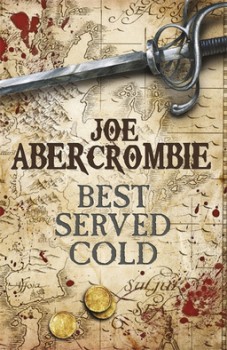 Remember a few weeks ago when I talked about Steven Erikson being in my top five fantasy authors? Joe Abercrombie is in there, too – in fact, he’s probably higher than Erikson. The First Law trilogy blew me away, which makes it painful to say that its immediate sequel, Best Served Cold, left me a little disappointed.

Don’t get me wrong: this fantasy-style homage to Kill Bill is just as fast-paced and exciting as the First Law books. Monza Murcatto is a brilliantly flawed protagonist, and between the return of drunken mercenary Nicomo Cosca and newcomers like poisoner Morveer and numbers-obsessed killer Friendly, there’s plenty of Abercrombie’s dark humor. The twists and turns are intriguing, particularly with master assassin Shenkt.

But I found myself missing the epic scope, since I would’ve been surprised if (Spoiler Alert) Monza didn’t succeed in her revenge quest (End Spoiler). And while seeing familiar faces like High King Jezal dan Luthar and Vitari is great and all, along with references to other characters and elements, it’s almost like cameos by John Stamos and Bob Saget on Fuller House: it just reminds you that the original was better.

My biggest criticism is another returning character: Shivers, who appeared in the First Law trilogy as a young Northman with a grudge against Logen Ninefingers. In the previous books, Shivers was his own character, one of many distinct Northern characters and specifically a reminder for Logen about his past bloody crimes. For some reason, Shivers in this novel is like a paper cut-out of Logen without the heart: he has the same mannerisms, wants to be better but can’t, falls for someone who is clearly going to be a problem, and goes berserk with violence just like the Bloody-Nine.

Whereas Logen’s path in the previous books is well-developed and tragic, Shivers’s character arc makes less sense the closer you get to the end of the novel – unless you conclude that he just snapped, which to me is like the narrator finding out that the events of the novel were just a dream.

Best Served Cold isn’t a bad novel by any means – it’s just flawed, and felt more to me like Abercrombie showing off highlights from his previous novels while setting up characters and circumstances that I’m sure impact The Heroes, the next chronological book in this world, and the stories that follow it. I’m looking at The Heroes sitting on my to-read shelf right now (I’ll get to you, don’t worry) and I wouldn’t be at all surprised if characters from Best Served Cold show up in there somewhere. Although if they do, Abercrombie had better do them justice in a novel that’s less disappointing – otherwise he might drop from my top-five list.

An Ottawa teacher by day, Brandon has been published work in On Spec, Third Flatiron Anthologies, and elsewhere. His next short story, “Blaze-of-Glory Shoes,” will be published in The 2017 Young Explorer’s Adventure Guide on December 1. Learn more at brandoncrilly.wordpress.com or on Twitter: @B_Crilly

Thanks for the review Brandon. I’ve only read Abercrombie’s Half a King, which I really, really like but I understand it is very different from most of his other fantasy books.

Just curious, who is in your top 5 fantasy writers? Or even better, your top 10?

I’ve never read Erikson, though I’m familiar with the name. When it comes to new fantasy authors, besides Abercrombie, I’ve read (and like) Pat Rothfuss and Scott Lynch.

Abercrombie is in my top 5 too. If I stick to only current authors, he’s an easy number 1.
I loved all his books, but I have to say that Heroes is my very favorite, maybe all time favorite.

Abercrombie is probably in my top 5 list of “Current authors I have on my Kindle and really, really need to read soon.”

(Other entrants include Scott Lynch and Mark Lawrence.)

I’ve heard excellent things about Half a King and Heroes – eager to check them both out.

Erikson takes a bit of effort to get into; his worldbuilding is vast, and he doesn’t explain references the characters make right away. Figuring things out ends up being part of the fun, though, so I highly recommend him.

This tends to fluctuate, though, some new authors I’ve read lately are going to probably end up in there. For example, I absolutely loved Leah Bobet’s INHERITANCE OF ASHES, so once I’ve read more of her stuff I expect her to move into the Top 5.

Thanks for the top 5 Brandon. I’ve never heard of Bilodeau. Glad to know about her. I’ll keep her on my radar.

I highly, highly recommend Marie’s work – a great place to start is her novel EYE OF GLASS, which is part of the Hellmaw universe in TEGG. (Full disclosure: I’m a TEGG author as well, but I don’t recommend a novel unless I really enjoy it, even if it’s written by a friend.) Marie also blogs here on Black Gate from time to time 🙂

I’ve been meaning to read Lynch but just haven’t gotten around to it. I read the first two omnibuses of Cook’s Black Company novels – I wasn’t crazy about the switch away from Croaker as narrator, especially since he kept Croaker around in 3rd person POV. Switching things around like that didn’t make a lot of sense to me. I haven’t read past BOOKS OF THE SOUTH.

I found THE HEROES a step up from BEST SERVED COLD, even if it didn’t quite reach the heights of THE FIRST LAW trilogy.
Still looking forward to HALF A KING.

Abercrombie’s Shattered Sea Trilogy, (Half a King, Half the World, Half a War), is absolutely incredible. I know its Abercrombie’s attempt at YA, but I can only see it considered YA when you compare it to Abercrombie’s other stories. That and it does have a coming-of-age theme for a different character in each book.
It’s the only books, I’ve read in the last few years where I really became emotionally vested in the characters.