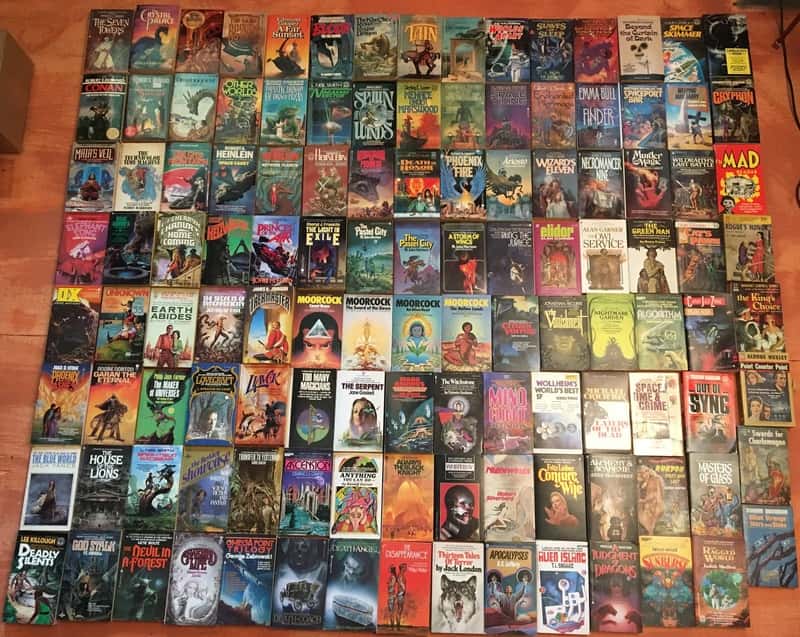 I came home from the 2017 Windy City Pulp & Paper Show with a lot of books.

The 120 SF & fantasy paperbacks books above represent the bulk of my purchases this year. I found plenty of additional treasures — including early issues of Hugo Gernsback’s Science Wonder Stories, a handful of hardcovers, art books, bargain graphic novels, and plenty of magazines — but this year, it was mostly about the paperbacks.

And man, what a haul. As I mentioned in my brief report Saturday morning, one of the highlights of the convention was discovering a vendor in the back of the room selling mint condition, unread SF paperbacks from the 70s and 80s at cover price (about $2 each). It was like stepping back in time 30 years into a well-stocked bookstore. You can’t reasonably expect someone to keep their head under circumstances like that. 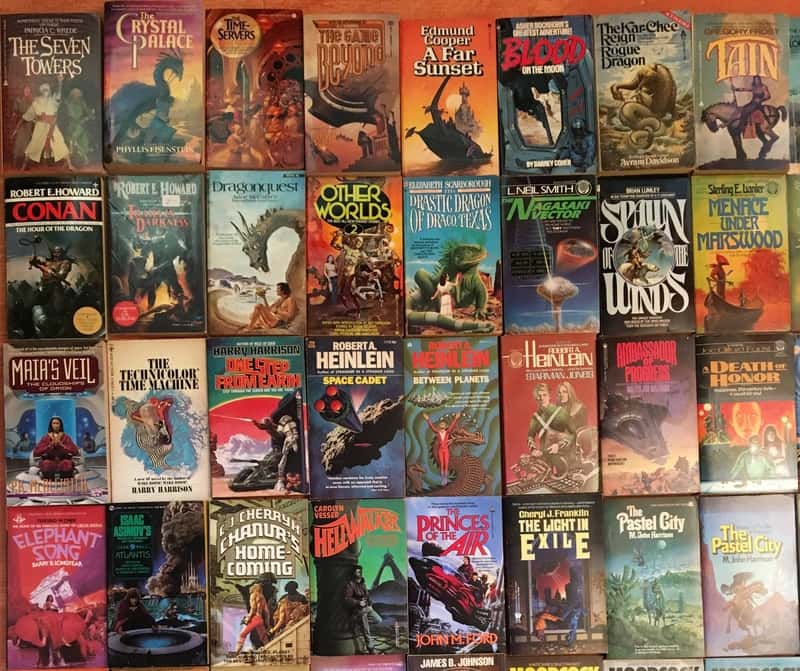 In about 30 minutes in that booth, I assembled from scratch the start of a pretty decent science fiction collection. I supplemented it with additional purchases (mostly from a vendor in the corner selling $1 vintage paperbacks, and a return trip to the $2 booth late Sunday when the vendor cut his prices in half), and the result was very nearly enough books to carpet the floor in my living room.

One thing I love about this field is the constant sense of discovery. Did you know (for example) that there was a paperback edition of Brian Lumley’s 1978 Titus Crow collection Spawn of the Winds? I didn’t.  Or that there was a Berkley paperback edition of Harry Harrison’s 1967 novel The Technicolor Time Machine? Or that Walter Jon Williams’s debut novel was a far-future space opera, Ambassador of Progress (Tor, 1984)? Or that Patricia C. Wrede published standalone fantasy novel The Seven Towers in 1984? Who knew? 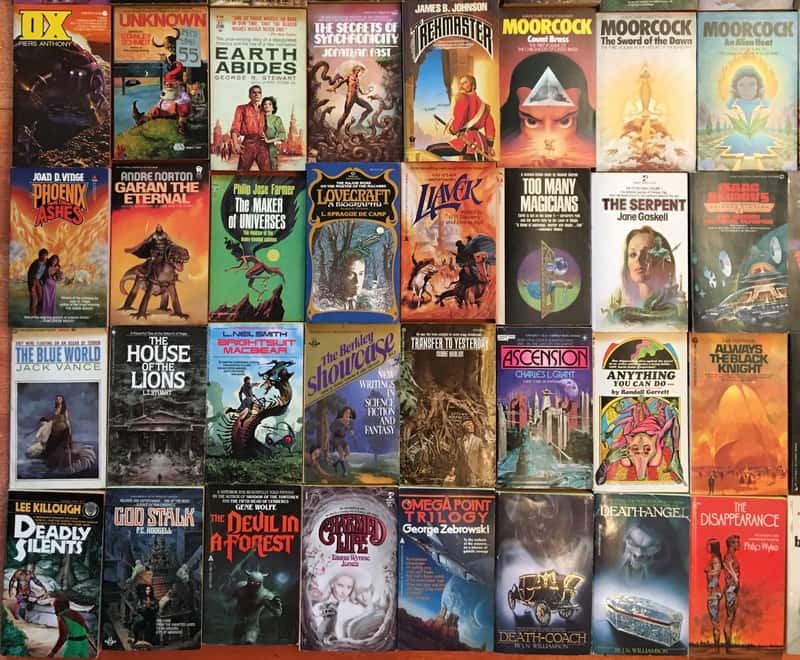 I was also delighted to find a brand new (from 1976) copy of Piers Anthony’s OX, one of the first science fiction novels I ever read at the tender age of 12. In the same lot I found a copy of Will Shetterly & Emma Bull’s shared world anthology Liavek (1985), with contributions from Gene Wolfe, Patricia C. Wrede, Nancy Kress, Steven Brust, Robin Hobb, Barry B. Longyear, and many others.

I was especially delighted to find a pair of books by Randall Garrett: the original Curtis paperback edition of Too Many Magicians, the 1967 Hugo nominee in his Lord Darcy series, set in an alternate Britain where magic has supplanted technology and Lord Darcy is the Chief Criminal Investigator for the Duke of Normandy, and a novel I never even knew existed, Anything You Can Do (1969).

I also bought a mint-condition copy of P.D. Hodgell’s God Stalk, just because it would make Fletcher Vredenburgh happy. 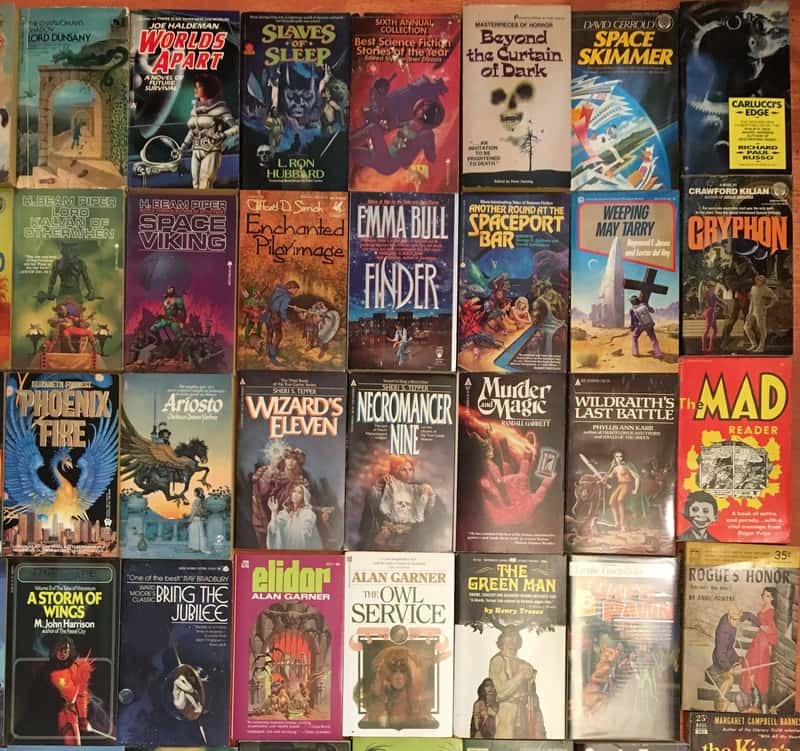 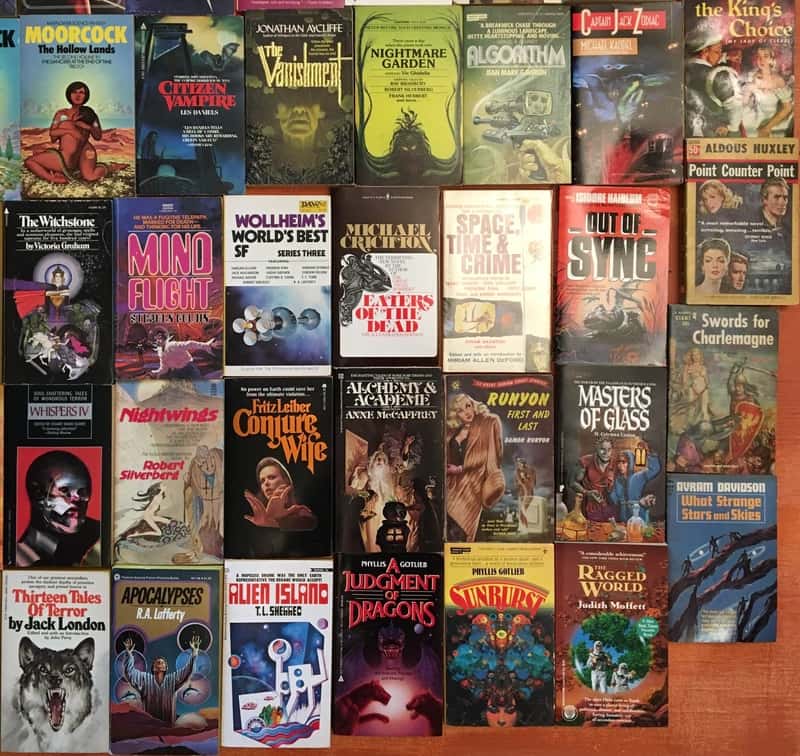 I made a few significant finds in the last day of the show. I was not aware, for example, that horror writer Les Daniels had a vampire series until I stumbled on Citizen Vampire (1981), the third book in his 5-volume Don Sebastian de Villanueva series. I was well aware of Michael Kandel’s Strange Invasion (1989) and In Between Dragons (1990), but I never knew his surreal cyberpunk novel Captain Jack Zodiac (Bantam Spectra, 1991) even existed until I laid eyes on it in a book bin on the floor. Ditto for the 1964 anthology from Miriam Allen deFord, Space, Time & Crime.

One of my favorite finds of the show was Jack London’s 1978 Popular Library collection Thirteen Tales of Terror, which gathers together some of his most popular horror stories. It made a nice discovery next to R.A. Lafferty’s novella collection Apocalypses (1977), and the weird little 1970 Ballantine paperback Alien Island, from someone I’ve never heard of, T. L. Sherred. I was also pleased to find another edition of Fritz Leiber’s Conjure Wife, to add to my growing collection.

Needless to say, this pile of paperbacks has made me very happy, and will keep my busy for weeks. In terms of sheer volume, it is only eclipsed by the four boxes (roughly 400 paperbacks) from Martin H. Greenberg’s collection I purchased in 2012 — also at Windy City, as it turns out.

If I have time, I’ll also catalog my remaining finds from the show in a subsequent post. In the meantime, enjoy some of our previous coverage of the Windy City Pulp & Paper Show.

See all of our Convention Reports here.

This looks like some of the pile that’s right next to my bed.

How much you want for it?

I remember buying that edition of Space Cadet with my allowance money at the late lamented Hungry Mind bookstore, and then reading it as I slowly walked home. Except I wasn’t walking home: when I looked up from the book I found myself in a neighborhood I didn’t recognize. That’s when I realized I might have a problem with this book thing.

T. L. Sherred’s “E for Effort” is one of the best SF stories ever.

Another solid score! I really like the variety of books in this massive buy!

How about taking a Black Gate blood oath that you’re actually going to read some of these, John? I would recommend What Strange Stars and Skies, Conjure Wife, Citizen Vampire, The Owl Service, and Bring the Jubilee.

Though just stacking them up and gloating as you run your hands over the covers is a lot of fun. I’ve done plenty of that, too…

I see you got your hands on a Vic Ghidalia edited horror anthology, Nightmare Garden. I don’t know who that Ghidalia chap was, but I have about four or five of his edited horror anthologies, including this one. And they are always really good. Some of his included stories are more sci-fi with horrific elements, but I think they fit his themes. Might do a post on Vic Ghidalia sometime (after I catch up doing Del Rey Best ofs!).

Very cool selection. Let me guess you went there to sell books and came back with more than what you left with?

I trust my Jane Gaskell reviews had some influence on you purchasing The Serpent:)

I’d love to read Another Round At the Spaceport Bar (and the first book as well). I have a fondness for SF-F story collections and anthologies set in the bar.

Yes, some great stuff there, some of which I own and some of which I covet. That edition of Space Cadet (and ditto Between Planets) was the one that belonged to my father and was one of my earliest Heinleins. (Red Planet was the first, though.) And I also have that edition of Starman Jones, although I’m not sure if I bought it myself or wheedled someone else into getting it for me.

I thought Sherred’s name sounded familiar! I just reread “E for Effort” in The SF Hall of Fame 2b. Pretty remarkable. It also shows where Asimov’s “The Dead Past” came from–still a strikingly original story, but not quite as original as I once thought.

Whoever had that copy of God Stalk was missing out. I read read and reread mine until the binding disintegrated.

> I remember buying that edition of Space Cadet with my allowance money at the late lamented Hungry Mind
> bookstore, and then reading it as I slowly walked home. Except I wasn’t walking home: when I looked up
> from the book I found myself in a neighborhood I didn’t recognize.

Back in 1995, I was driving from Champaign, IL to Ottawa, Ontario, a 16-hour trip I used to do in a single day (those days are long over, fortunately).

I had several books on tape for the trip, and the first was John Grisham’s The Pelican Brief. I was deeply mesmerized by that book… so much so that when it ended, I came out of a trance and realized I’d driven over a hundred miles off course, deep into northern Michigan!

It was worth it.

Holy Cats! I never made that connection. (And I’m not sure I ever read it in The SF Hall of Fame 2B). But in any case, shame on me.

Still, I’m certain I’ve never seen Alien Island before. It doesn’t seem to have much of a rep among readers of vintage SF. Know anything about it?

> Another solid score! I really like the variety of books in this massive buy!

Thanks Kelly. And me too!

> I would recommend What Strange Stars and Skies, Conjure Wife, Citizen Vampire, The Owl Service, and Bring the Jubilee.

Good recs! I do hope to read and write up a few of these for Black Gate. Right now my top picks are Citizen Vampire, Too Many Magicians, Liavek, God Stalk, and Jack London’s Thirteen Tales of Terror.

> Might do a post on Vic Ghidalia sometime (after I catch up doing Del Rey Best ofs!).

I heartily endorse that plan!

> I trust my Jane Gaskell reviews had some influence on you purchasing The Serpent:)

It did! I already had a complete set, but that copy was in such good shape I couldn’t say no.

> I’d love to read Another Round At the Spaceport Bar (and the first book as well). I have a fondness for SF-F story collections and anthologies set in the bar.

Yeah, me too. I’m thinking about doing a series on Space Bar anthologies. There’s a surprising number of them out there!

Violette Malan wrote a series of articles on tavern tales for us a while back too.