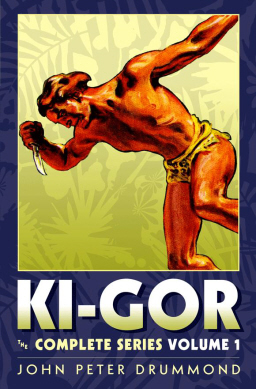 Two weekends ago I headed up to the Windy City Pulp and Paperback convention and spent some time with John O’Neill, John Hocking, Eric Knight, and Morgan Holmes. It was a pleasure to see them again, and to meet in person a number of folks I’ve only ever corresponded with, not to mention chat with David Smith and Steve Haffner and a number of people I only bump into at the con.

The chief draw of the con for me is the companionship among like-minded people; the ancient magazines and paperbacks (hardbacks too, although I’ve never purchased any) are really just an excuse. That said, I did walk away with a number of minor treasures, amongst them some Ki-Gor tales from Jungle Stories.

I was introduced to the glories of Jungle Stories just a few years back courtesy of first Andy Beau and then some enthusiastic further recommendations from Hocking and Morgan. Ki-Gor was written by a house author, meaning that his exploits were written by any number of authors but all credited to the imaginary John Peter Drummond.

As a result you can probably anticipate, correctly, that the Ki-Gor stories are a mixed bag. The worst of them are the most vile pulp writing you can imagine. But the best of them are written in a frenzy of glorious purple prose. Hocking has described these good ones as sounding a lot like they are Tarzan stories as written by Robert E. Howard or Mickey Spillane, and I’ve found that description apt. Of the thirty or so I’ve read now a little over a dozen are pulp gems. By gems I mean they’re outrageous adventure romps turned up to 11, with great action scenes, monsters, menaces, voodoo queens, dinosaurs, walking zombies — all the stuff you expect to find when you first hear of pulps and rarely encounter — for in reality the majority of pulps are pretty banal and not nearly as exciting as their covers

After we dug through the stacks of treasures, many of those I mention above retreated to the Black Gate inner sanctum high above downtown Chicago. There we relaxed in leather chairs, surrounded by wall-to-wall bookcases stuffed with rare volumes, collections of Planet Stories, Astounding, Weird Tales, If, and other legendary magazines, naturally interspersed with busts of Clark Ashton Smith, Robert E. Howard, Leigh Brackett, and other legends (Steven Silver and Eric Knight had to bow out, alas, as they had tickets for the opening night of Damn Spot! the new Shakespeare musical.)

The last two weeks involved two long trips up north, and I’ve fallen behind with reading subs as a result. I resumed reading a few days ago and am into middle-to-late 2006. John and I are both working through the accumulated subs for the next few weeks before we turn all attention to getting issue 11 out the door.

The first review of Black Gate 10 came in, courtesy of Sherwood Smith at Tangent.

And in case you haven’t yet noticed, the updates at the Black Gate web site are now going up one a week, courtesy of the talented and efficient Leo Grin. This last week we uploaded a review of Imaro and The Children of Hurin. Stay tuned for many more articles and interviews.