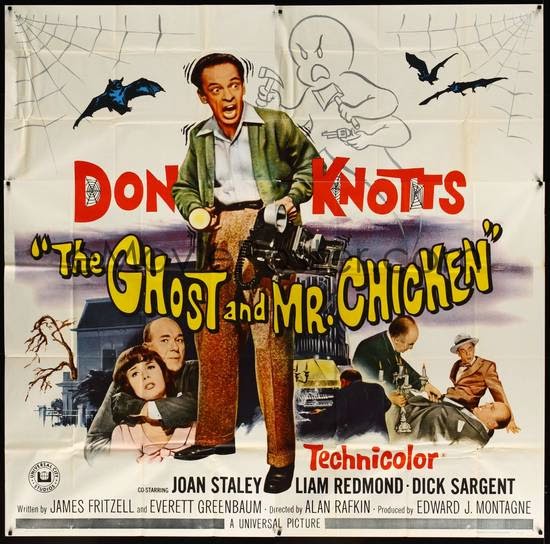 This time around, two old dark house flicks that are separated by about a year. A classic of the genre and one’s that’s a bit of a dud.

Your opinion about The Ghost and Mr. Chicken will probably depend on how you feel about Don Knotts, someone who made a career of playing variations on the same character — a jittery, keyed up guy who often tried to cover up his bumbling with bluster.

His most famous incarnation of the character was Barney Fife, deputy to Sheriff Andy Taylor on The Andy Griffith Show (1960-68).

But Knotts carried the nervous guy character over to later film and TV roles, including a five-movie stint with Universal that included The Reluctant Astronaut (1967), The Shakiest Gun in the West (1968), The Love God? (1969) and How to Frame a Figg (1971).

The first of this bunch was The Ghost and Mr. Chicken (1966). I like the Don Knotts nervous guy character, which is a good thing because he dominates the proceedings in these Universal movies, including this one. Which I’d go so far as to rank as one of the best old dark house comedies.

On hand for Knotts’ first Universal movie were a pair of writers from The Andy Griffith Show. “The Haunted House,” a fourth season episode of that show, provided the inspiration for the movie and Griffith himself chipped in with some suggestions.

The nervous guy this time around is one Luther Heggs, a newspaper typesetter for a small paper in the little town of Rachel, Kansas, a classic American town of a type that may or may not have existed only on TV and in the movies. Luther aspires to become a big time journalist one day — or at least what passes for such a thing in Rachel.

After witnessing what seems to be a murder outside the haunted Simmons house and being ridiculed when it’s found that there was no murder, a plan is concocted wherein Luther will spend a night in the mansion and write about it.

This leads to a number of fine old dark house moments (bleeding portrait, secret passageway, bloodstained organ that plays itself) all of which is enhanced by Luther’s nervous guy responses. After writing an article about his adventures Luther becomes the talk of the town and a picnic is thrown in his honor, which is arguably one of the high points of the movie.

But the current owner of the Simmons house (a “murder house,” according to one character) is in a hurry to tear it down and doesn’t care for any meddling. Luther is slapped with a libel lawsuit and when a hotshot attorney gets hold of him in court things go south and he becomes persona non grata.

But there are a few twists (if you want to be generous with your terminology) at the end and I don’t think I’ll be spoiling anything if I reveal that everything works out in Luther’s favor. 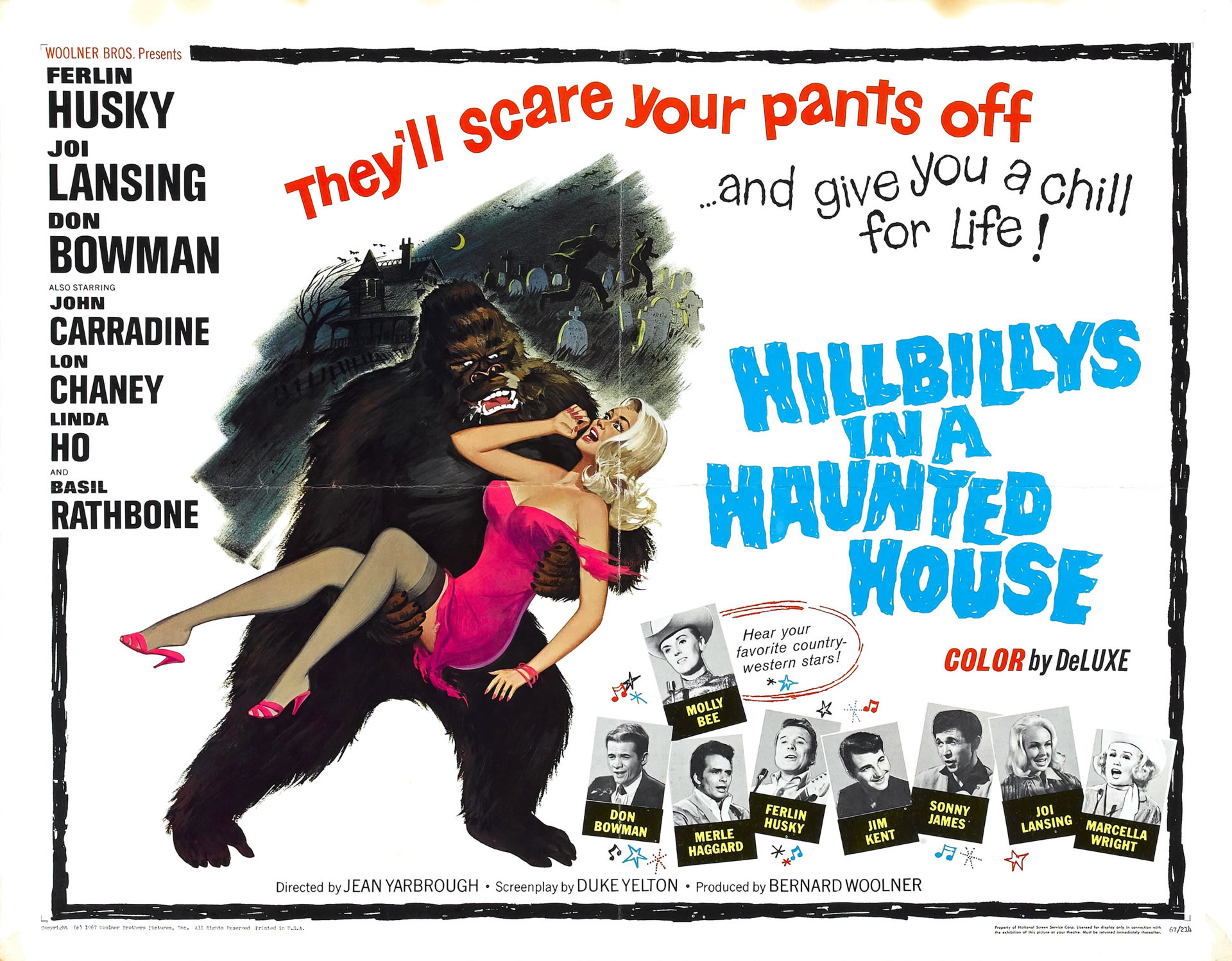 As I embarked on a screening of Hillbillies in a Haunted House I wasn’t aware that it had been given the RiffTrax (a later incarnation of Mystery Science Theater 3000) treatment. But in retrospect, it’s not surprising.

There’s plenty to poke sport at here. Though it didn’t quite seem to reach the heights (depths?) of ineptness of many Riffrax/MST3K subjects. Mostly it was just kind of dull and plodding. But perhaps not as much, if you’re a fan of old school country music. 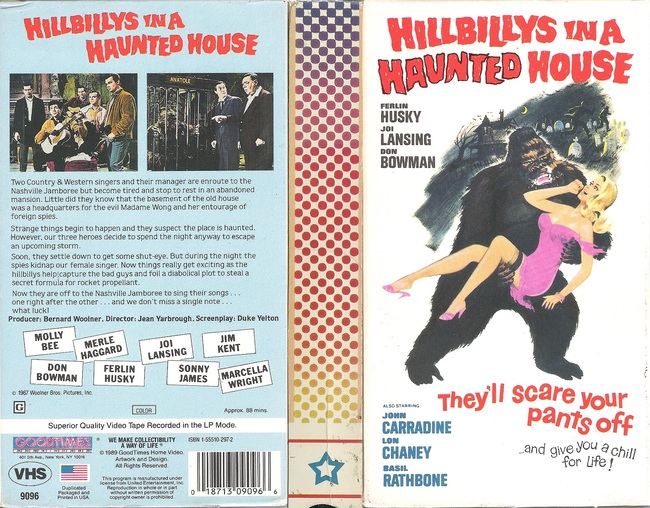 The gimmick here is that a pair of country singers and their manager are heading to Nashville but detour to an old mansion to spend the night. One of the singers is bonafide country singer, Ferlin Husky. Who is partnered with Joi Lansing, an actress and nightclub singer whose participation here could conceivably have been due to certain other “assets” she possessed.

Don Bowman plays the part of their stressed, scaredy cat manager. I think he was meant to be the comic relief but didn’t manage to contribute much in the way of comedy. I was not familiar with Bowman but he had something of a career turning out country-flavored novelty songs, apparently along the lines of Ray Stevens. 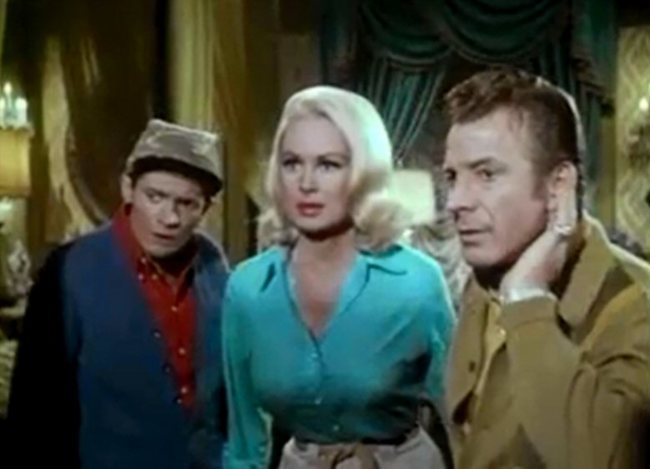 Also on hand for a bit of performance footage, Merle Haggard. From the horror movie side of the fence, Lon Chaney Jr, Basil Rathbone and John Carradine are present, playing members of a spy ring who are hiding out in the mansion and who resort to some tepid scares to try to drive away the intruders. In finest old dark house fashion, there’s also a gorilla on hand.

None of which adds up to much, if you’re not into country music. The proceedings are regularly derailed to allow someone to break into song, the scares – as already mentioned – are weak, and entirely too much time was given over to the spy ring sub-plot. I haven’t seen the RiffTrax episode yet but if you’ve ever considered watching the full movie, my suggestion would be to skip it and watch that version instead. 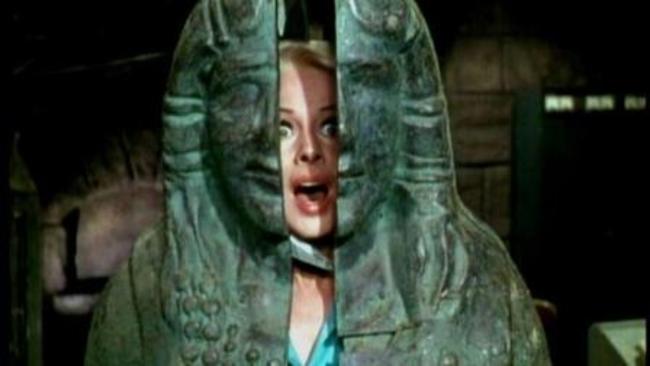 William I. Lengeman III digs into the TV vaults at Forgotten TV. His last article for us was Star Trek Movie Rewatch: Star Trek: First Contact (1996).

The best part of The Ghost and Mister Chicken is the great Vic Mizzy score; he also did the music for the Reluctant Astronaut and The Shakiest Gun in the West.

It’s been ages since I’ve seen The Ghost and Mr. Chicken, but it’s my favorite of the best Don Knotts movies I’ve seen. Never mind that Luther has nerves of taffy, that would be one freaky house to walk through with only a flashlight.

LOVE ‘Ghost’ and ‘Shakiest Gun in the West.’

It’s been entirely too long since I’ve seen The Ghost and Mr. Chicken. I did see Don Knotts recently when I watched the latest rerelease of It’s a Mad, Mad, Mad, Mad World.

Is it just me, or does the tagline “… they’ll scare your pants off” sound like it could be implying an entirely different type of movie?

Joe H: “Is it just me, or does the tagline ‘… they’ll scare your pants off’ sound like it could be implying an entirely different type of movie?”

I’m almost positive there was a ’70s horror/sexploitation drive-in movie that used that same tagline.

I haven’t seen Ghost and Mr. Chicken since our junior high held a screening of it. All I remember is Knotts doing his thing, the creepy organ — which I remember was kind of cool — and my curious interest in the female lead, because I was just starting to understand why James Bond spent so much time talking to women. I remember thinking that she seemed so much older than me and wondering why I found her so striking. Hah!

You weren’t the only one to find Joan Stanley striking, Howard – Hugh Hefner did too, and gave her some space in a magazine he edited, I can’t remember the name…