The short version on the Borg, in case you missed it, is that they were cyborgs linked to a collective mind and whose primary goal seemed to be assimilating other species, which basically meant turning them into Borg and adding them to the collective. I haven’t seen all of the many Borg episodes and I do recall that there were a few duds, but the Borg at their finest made for good entertainment.

This time around they are up to their usual tricks and, following some thrilling space battle stuff, one of their ships travels back in time to Earth, about a half century past our own time. The Enterprise gets swept up in the time travel jump and all parties concerned land at about the time of the first warp drive-powered flight… and also the first meeting of Earthlings with an alien civilization (Vulcan, as luck would have it), events the Borg want to fiddle with in order to rewrite history.

On Earth, the crew need to make sure that warp drive inventor, Zefram Cochrane (James Cromwell), goes ahead with that first warp flight. Which is all well and good but crusty, crabby Cochrane is reluctant to do so and doesn’t care much for these people from the future making a big fuss over him and his substantial contribution to history.

Meanwhile back on the Enterprise, Captain Picard, who has his own rather unpleasant history with the Borg, squares off against the plodding, leather-clad automatons who are proceeding to assimilate as much of his crew as they can. Amidst all of this there’s a side plot with the queen of the Borg, who kidnaps Data and gives him the third degree in hopes of gaining valuable information. 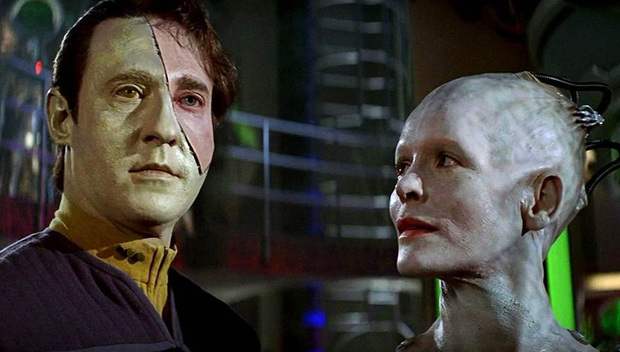 It wouldn’t be giving away too much to reveal that, for the most part, it all works out in the end. The plot is fairly standard for Star Trek, and don’t bother to think too hard about the logic of the time travel stuff, which doesn’t really stand up to much scrutiny.

Alice Krige does an admirable job of playing the Borg queen with a quiet sort of menace, but the fact there even is a Borg queen and the fact that she speaks and emotes, after a fashion, kind of works against what made the Borg so creepy in the first place.

Which sounds like I might be damning this installment with faint praise or perhaps none at all, but that’s not actually the case. These few quibbles aside, I thought First Contact was very well executed and one of the better Star Trek movies.

I’d even go so far as to say its one of the best of the bunch.

William I. Lengeman III’s last article for us was Old Dark House Double Feature IV: Two Haunted Honeymoons. He holds forth at www.wileng3.com.

Definitely the best of the Next Generation movies, although the Borg Queen also rubbed me the wrong way for much the reason it did you.

Actually the Borg changed their style in this movie. And I dont mean the (much better) makeup:
When the Borg showed up in the series they didnt care for the humans, they stole theb technology. In the first Borg episodes, they dismantled the enterprise.
Im not sure if the focus to the assimilating is a good thing or a bad.
But I did like this movie.

James Cromwell was a treat in this.

BTW – he was SUPERB in LA Confidential.

EVERYTHING was superb in LA Confidential, but James Cromwell was near the top of the scale of superbity.

(I also hadn’t — well, haven’t — seen the movie Babe, so I didn’t have to do a major adjustment to accept the loveable farmer as the … not so loveable police officer.)

I HAD seen Babe — and recently — when I sat down in a theater t watch LA Confidential. And that scene with Cromwell and Kevin Spacey left my jaw on the floor.

As for the Borg Queen… I found I quite liked her. I agree with William’s assessment that the Borg are the most effective of all Star Trek villains, but their biggest narrative flaw is that there are no memorable Borg. They’re all interchangeable. The Borg Queen gave us a focus for all that fear and hatred, and Alice Krige did a knockout job in the role. Yeah, having a queen was paradoxical for a collective, but it helped make the Borg a little more mysterious and inscrutable — and all of a sudden, less predictable — and I found I liked that too.

I liked the queen and the whole Q&A between her and Data was the soul of the film for me – besides, isn’t every hive supposed to have a queen?