I’m not always the most attentive or detail oriented movie watcher. So, as I came to the end of The Voyage Home, the fourth of the original cast Star Trek movies, I realized that I still didn’t know exactly what was going on with those whales.

After movie three — The Search For Spock — the crew of the late starship Enterprise (watch the aforementioned for more details on that) are laying over on Vulcan, getting their commandeered Klingon ship up to speed when Earth finds itself menaced by a Big Dumb Object of some sort. It demands that it be paid a tribute of whales – or something like that — or it will wipe out the Earth in dramatic fashion. Our heroes enact that time honored SF convention of slingshotting around the sun to go several centuries back in time (with keen precision, I must note) and pick up a few whales, which they spirit off in a hastily built whale tank in the Klingon ship.

Okay, so that’s not quite right, at least not the bit about the BDO holding the Earth hostage in exchange for whales. Since I never did get that part sorted out, I had to go back and do some additional post-viewing research.

If I understand it right, the aliens who sent the BDO had made contact with the whales in Earth’s remote past and are coming back to have a chat with them, not realizing that they are now extinct. I’m a little hazy on why the probe is wreaking havoc on Earth but it might be due to the fact that it is upping the power on its transmissions after not receiving any responses from whales. Which is a pretty shaky plot construct, if you ask me.

The movie uses one of the premises I liked least in the original series — that of sending the crew back in time to our present day. Which is right up there with the cowboy and gangster episodes on my list of least favorite episodes.

But even after all this carping, I’ll say that the relative abundance of interesting little moments here nearly make up for the tiresome premise and the goofy plot. Whales aside — and you could almost theorize that they were a McGuffin — this is basically a fish out of water story that allows our heroes to be befuddled by and sometimes angry at the way primitive Earthling types conducted themselves in the mid-Eighties.

Kirk and Spock make a pretty good comedy team here, with the latter’s deadpan demeanor and occasional wry observations and the former called upon to rapidly compensate in mid-stream for things that he finds incomprehensible. There are other high points too — a Russian wandering around San Francisco at the tail end of the Cold War looking for nuclear “wessels” and Mr. Scott’s confusion over a computer that doesn’t respond to spoken commands, just to name a few.

Now that I’m at the halfway point of the rewatch project, I’ll summarize thus far — leaving out the two reboots, about which I’ve said all I wish to say. The Motion Picture, muddled and bloated as it was, was arguably the best in terms of science fictional concepts. The Wrath of Khan was a rollicking adventure that could have fit into a Thirties pulp mag, with just a few minor tweaks. The Search for Spock, well, it was just kind of there. As for The Voyage Home, I’d rank it as the most entertaining of the original cast movies so far.

Some decent effects — visual and sound — for the BDO. Definitely gave an impression of bigness.

Pointed sideburns will apparently never go out of fashion in this version of the future.

Chekov looks pretty spiffy — lying there in his hospital bed — for someone who’s taken a rather ungraceful swan dive into the pavement.

Scotty’s a very capable typist for someone expects his computers to respond to his voice. 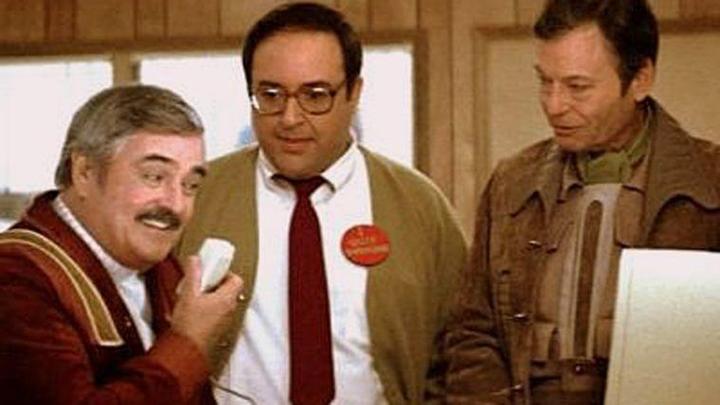 William I. Lengeman III’s last article for us was A Helluva Detour: The Mysterious Island. He holds forth at www.wileng3.com.

The high point has to be when mccoy’s at the hospital and he’s thoroughly outraged.

Can’t wait for the Star Trek V review. Its not as bad as everyone says it is.

And agreed that this is probably the most entertaining of the original films, and arguably the second most Star Trekky, after the original ST:TMP.

I agree with Glenn. I just re-watched STV (in prep for William’s re-watch), and found myself enjoying it more than I remembered.

It’s clear that Shatner, in his first time directing a Star Trek film, was trying for a broader mix of comedy than the other films, and there were plenty of times when the comedy missed the mark. But there were plenty of times when the TV show reached for broad comedy (The Trouble With Tribbles, Mudd’s Women), and it seems Shatner was the only one who remembered that.

ST V reminded me, in a good way, of some of my favorite episodes of the original series. They weren’t always the most remembered or highly regarded episodes, but the comedy aspect of the show was a big part of why I enjoyed it, and I’m glad Shatner played tribute to that part of Star Trek’s identity.

As far as ST V is concerned, I sort of lucked out. I saw it first in college when it came on HBO. The tv I had in my dorm room was a 12″ black & White, so I basically couldn’t see just how bad the special effects were. I actually enjoyed it.

@John—-I agree about the comedy. That was part of the original Star Trek charm.

Yes, have to agree that McCoy in the hospital is by miles the highlight of this, with minor props to Scotty with the computer.

As for Star Trek V, all I’ll say is that I was fortunate enough to see it at a drive-in with a college girlfriend who was more into me than science fiction. I had to wait for home video for Nichelle Nichols’s fan dance (not that it couldn’t have been wonderful, she had chops to appear on stage and headline the Chicago Playboy club singing and dancing, it just didn’t work in that time and place).