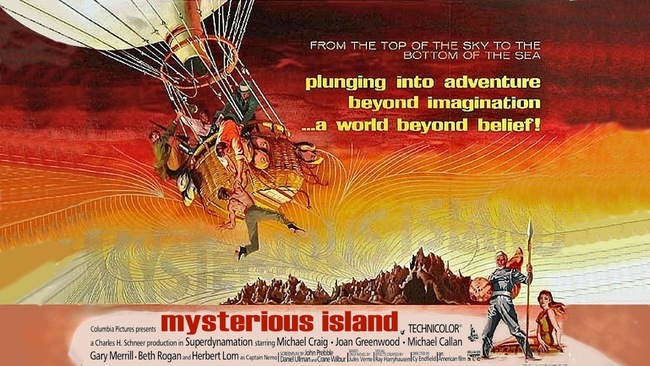 It wasn’t my intention to watch a bunch of adventure movies lately that all dated from the early Sixties. It just worked out that way. As coincidence would have it, the three I watched shared a similar theme — that of being stranded. The Lost World (1960) found a group of adventurers stranded on a high plateau in South America. In Robinson Crusoe on Mars (1964), well, you can figure that one out. In The Mysterious Island (1961), a group of Union soldiers and a Confederate find their balloon swept way off course, all the way from Virginia to a point located somewhere in the South Sea Islands of the Pacific Ocean. Which is a helluva detour, by my reckoning.

Like The Lost World, which was based on a story by Sir Arthur Conan Doyle, The Mysterious Island is an adaption of a work by a well-known author of yesteryear. Jules Verne’s first novel, Five Weeks in a Balloon, was published in 1863 and in the next decade or so he turned out a number of books, including Journey to the Center of the Earth, From the Earth to the Moon, Twenty Thousand Leagues Under the Sea, and Around the World in Eighty Days. He returned to balloon adventures in The Mysterious Island, which was published in 1874. But it was hardly the end of the line for the prolific Verne, who had written his best known novels by this time, but who turned out many more novels before his death in 1905. 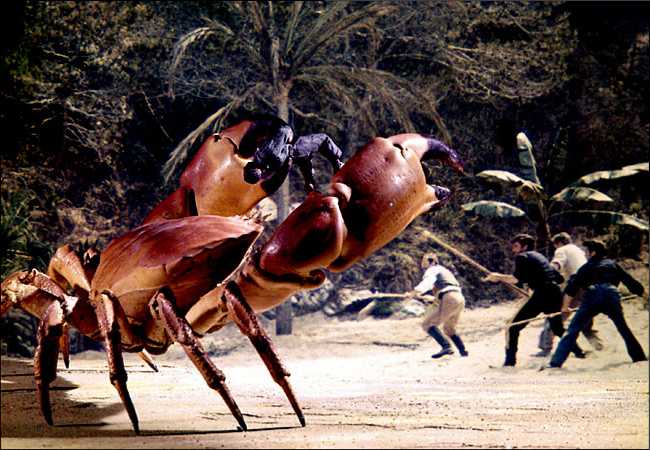 As the movie opens, a group of Union prisoners stage a prison break and make off with a conveniently placed balloon, which is located in plain sight of their prison cell. It’s a dark and stormy night and at first they’re ready to pitch their Confederate hostage over the side but then decide that it might be a good idea to have someone along who knows how to operate the balloon. Much time passes and eventually they find themselves unexpectedly plummeting downward. Fortunately they’re right over the aforementioned island in the Pacific Ocean and everyone survives the ravages of gravity.

It’s here that things move into fairly familiar “stranded on an island” territory, but with a few twists. Such as a giant crab (stop motion by effects master, Ray Harryhausen) who menaces the party and is dispatched, conveniently falling into a pool of superheated (by a volcano) water and being cooked. Things get more crowded when a high society woman and a younger, rather attractive woman are also shipwrecked on the island. 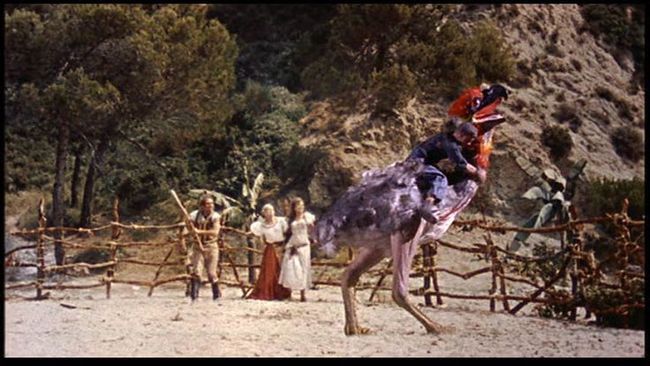 Before long the party is menaced by a strange looking giant bird, which is also dispatched, apparently by a mysterious benefactor. And yet, when the young woman and one of the soldiers who is slated to marry her (fast worker, that one) find themselves in what appears to be a giant honeycomb they’re take surprisingly long to catch on. Keep up, people. The giant bees were actually the most effective of the stop motion effects and hold up well even a half century later. 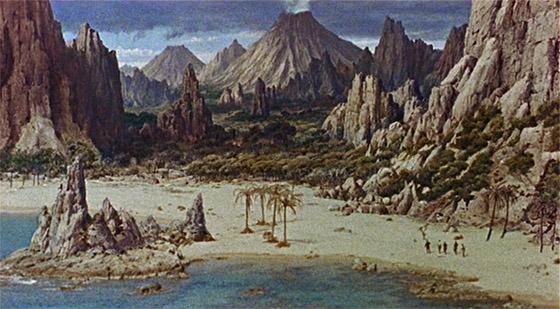 Next up, pirates. Who are also dispatched, again by a mysterious benefactor. Who turns out to be (spoiler coming) none other than Captain Nemo, last seen in Twenty Thousand Leagues Under the Sea. Whose game plan is to raise up the ship that he just sent off to Davy Jones’ locker and use it to allow the whole gang to escape the island. Which is about to be destroyed by that volcano at any moment. So everyone needs to step lively. It seems to be touch and go for a while, of course, but it all turns out okay in the end.

As with the other two movies I mentioned earlier, I found this to be a good but not great movie that mostly appealed in a “retro adventure movie of the early Sixties” kind of way. I’ll probably never watch it again but I didn’t regret the time spent with it the first time around.

William I. Lengeman III’s last article for us was his review of Robinson Crusoe on Mars, That Movie About the Guy Who’s Stranded on Mars. He holds forth at www.wileng3.com.

One of Bernard Herrmann’s best scores too.