Chuck Wendig is the author of the Star Wars: Aftermath trilogy, the Miriam Black novels, The Heartland Trilogy, and many other fine novels. His two-volume series for Skyscape books, Atlanta Burns, piqued my interest… maybe it’s the covers, or maybe because I’m a Veronica Mars fan. Here’s Chuck’s intro to the series from his website.

I wrote this book a couple years ago, and published it as two separate volumes — a novella, Shotgun Gravy, and a follow-up novel, Bait Dog. (The latter published with the help of Kickstarter.) It was a foray into young adult and crime writing at the same time, and the result was something with which I was honestly very happy. Atlanta Burns is a character after my own heart: she is a real-deal social justice warrior, an underdog who helps other underdogs — a saint to freaks and geeks, a foe to bullies and racists and other human monsters.

The book did well enough — or was at least intriguing enough — that Skyscape, the publisher of my young adult Heartland cornpunk trilogy, decided to pick up the first volume and a follow-up. (That follow-up is tentatively titled Frack You, and I am writing it now.) The first book is a re-edit of both Shotgun Gravy and Bait Dog, so that the two separate-but-connected stories are bound up as a single narrative volume. For those wanting to ask: that means this text is different from the two earlier self-published releases, substantially enough that this is a new book, but not so substantially that the story has dramatically changed.

It’s a tough book. I don’t know what trigger warnings to give it, so assume it’s got a basket of them. The book deals with suicide, sexual assault, dog fighting, bullying, guns. Yes, it’s young adult, but it’s got a lot of violence and more than its share of nasty words (though, honestly, probably nowhere near as nasty as what you hear out of most kids’ mouths). But despite all the Pennsyltucky grit, I like to think it’s funny and it has heart, too.

For now this looks like two standalone volumes, as Chuck has moved on to the bestselling Star Wars: Aftermath novels. If you’re looking for a compact noir series that’s been called “Veronica Mars with a shotgun,” this might be for you.

Here’s the back cover text for both volumes (click for legible versions). 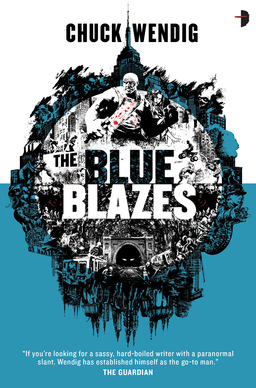 Both books were published in mass market paperbacks by Skyscape, with covers by Cyanotype Book Architects.

The Blue Blazes
The Miriam Black Series
Chuck Wendig’s Blackbirds is Punch-You-in-the-Face Good
Chuck Wendig Writes an Open Letter: “Dear Guy Who is Mad Because I Wrote a Gay Character in a Book”