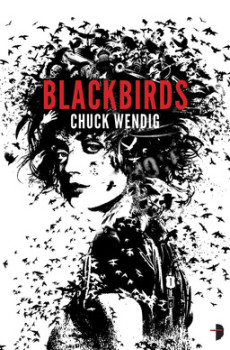 Fate wants what fate wants. No one knows this better then Miriam Black.

Miriam sees death every time she touches someone. A few seconds of skin-on-skin contact is all she needs to learn the exact date, time, and method of someone’s death. Over the past several years, she’s seen thousands of suicides and car crashes, violent deaths and peaceful ones. Miriam has long since stopped trying to save people, because it never works. Fate wants what fate wants; and when fate wants someone dead, it happens.

That is, until Miriam meets Louis and learns he will die saying her name, three weeks after they meet. Miriam knows she is present when Louis dies and that she must do everything she can to stop it.

Blackbirds is punch-you-in-the-face, miss-your-stop-on-the-train good. If it were a TV show, it would have an “MA LVS” warning — for mature audiences, language, violence, and sexual content. As such, this book isn’t going to be for everyone. It’s important to note, though, that all of this graphic content doesn’t feel gratuitous in any way. Wendig is masterful at characterization and he didn’t pull any punches when he wrote Miriam Black. She is foul-mouthed (once or twice I re-read a few sentences because I was simultaneously shocked, awed, and jealous), self-protective, and quite capable of holding her own in a bar fight. She might rub some readers the wrong way — especially after the visceral opening scene when she appears uncaring — but if you stick with her a bit, you’ll see her coarse, abrasive nature is nothing more than an armor that Miriam has had to acquire in order to keep her sanity intact.

The plot is fairly straight-forward and tightly constructed. There are no extraneous scenes or chapters. The “Interlude” segments serve to tell us Miriam’s backstory in an untraditional way. If I had one quibble with this book, it would be the ending. While it’s satisfying, completes the story, and is the expected ending, I felt Miriam could have been a little more proactive in carrying out the task fate had in mind for her. Still, that’s a minor complaint; I thoroughly enjoyed the book and look forward to reading the next in the series.