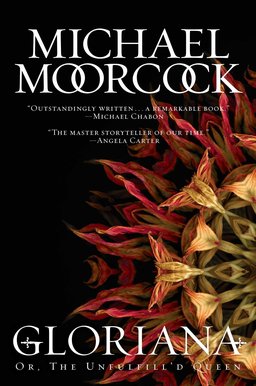 Michael Moorcock is best known today for his ambitious Eternal Champion story arc, which includes the sword & sorcery classic Elric of Melnibone, the Hawkmoon novels, the Chronicles of Corum, the Von Bek novels… and man, a whole lot more. Seriously, if you want to dive in, there’s a whole lot of reading ahead of you. The Wikipedia page, which lists roughly a billion novels and short stories in the seres, will get you started.

But some of Moorcock’s most acclaimed fantasies were standalone works — including the World Fantasy Award and John W. Campbell Award winner Gloriana: Or, The Unfulfill’d Queen, which first appeared nearly 40 years ago. The tale of a beautiful but sexually frustrated queen who finds herself drawn into deadly court intrigue, Gloriana has been reprinted over a dozen times, and at the end of the month Saga Press returns it to print again in a handsome new hardcover description. Here’s the description.

In this “spellbinding” (The Sunday Times) award-winning fantasy, the vast empire of Albion is ruled by the beautiful and forlorn queen, Gloriana who must battle against a nefarious scoundrel, Captain Quire, and a court soured by debauchery with her wits.

First published in 1978, Gloriana is the award-winning story set in the alternate English kingdom of Albion that reimagines Queen Elizabeth’s reign.

Bawdy, cruel, and brilliant, Gloriana has been awarded the World Fantasy Award and the John W. Campbell Memorial Award for Best Science Fiction, and is often cited as one of the great works of speculative fiction and fantasy along the lines of J.G. Ballard, Thomas Pynchon, and Philip K. Dick.

Gloriana has previously been published in the US by Avon Books, Questar, Warner Aspect, and the Science Fiction Book Club, and in the UK by Fontana, Gollancz Fantasy Masterworks, Gateway/Orion, and others. I’ve collected half a dozen examples below, with a gorgeous sampling of cover art — including the 1986 Flamingo edition, one of the rare examples of full frontal nudity I’ve ever seen on a mass market fantasy cover.

To start our tour, here’s the 1986 Questar/Popular Library edition, by an unknown artist.

This one has my favorite back cover text of the lot. You can click on the image above right to read it, but here it is:

Set in the court of Queen Gloriana of Albion, a fanciful alternative to that of Elizabeth I, Gloriana is a fantasy of secrets and skullduggery, a satire filled with wit and the farcical adventures of a lovely but sexually frustrated queen–and one of the most magical and wildly creative histories by one of science fiction’s truest innovators.

And here’s the 1979 Avon Books edition, with a wraparound cover by Elizabeth Malczynski. 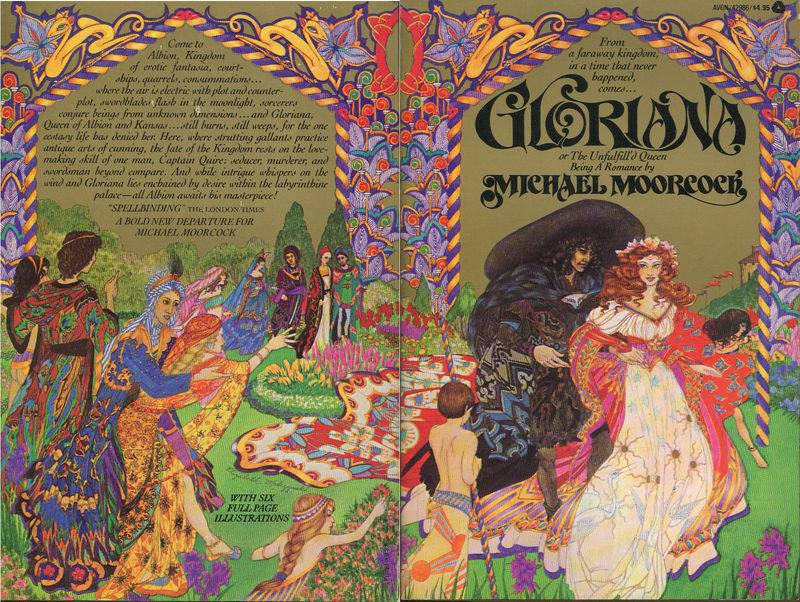 Gloriana was published in paperback in Canada by Fontana/Collins in October 1978, with a Gustave Moreau reproduction on the cover (below left). The 1986 Flamingo is the nude, a reproduction of Orientalist painter Adrien Henri Tanoux’s lush Salammbo (center). And it was reprinted by the Science Fiction Book Club as part of their 50th Anniversary Collection (#18) in April 2005 (below right).

Finally, here the Fantasy Masterworks version from Gollancz/Orion, with a much better reproduction of the Gustave Moreau.

It’s a great book, filled with echoes of Mervyn Peake and Shakespearian melodrama.

I believe the artist of the 1986 edition is Robert Gould

This is one of the relatively few Moorcock novels I haven’t actually read yet. New edition (especially an eBook) means that it’s probably time.

> It’s a great book, filled with echoes of Mervyn Peake and Shakespearian melodrama.

Yeah, well, don’t give me too much credit – I liked Indiana Jones and the Temple of Doom…

> I believe the artist of the 1986 edition is Robert Gould

I’m trying to confirm that, but it sure looks like you’re right. It certainly looks like his other Moorcock art, anyway.

Thanks for the tip!

Let us know if all that praise is deserved, Joe!

I bought the Fontana edition with Tanoux’s Salambo on it back in ’86. I never knew until now that the book was a reprint. The cover adjacent to it is Moreau’s ‘Sappho on the Rocks’ – both were 19th century French painters. Ironic, given the English setting.

You know your art, Aonghus! I had to look everything up. 🙂

Well….I recognised Moreau’s style (but not the painting in question) and reckoned the other cover was 19th century orientalist (which only narrowed it down to 50,000 or so possibilities). Usually the latter is based on some historical personage. I went with Cleopatra. Boy, was that a waste of time! I only found out the painter and the title via an books site.

Believe it or not, I found the original source for the Flamingo cover (Adrien Henri Tanoux’s Salammbo) by dragging and dropping the cover image into Google’s Image Search engine:

It found the original right away. Pretty slick!