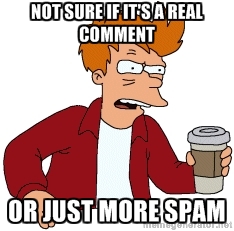 This week, my friend Marie looked at my website because I didn’t know what I was doing. You may recall that one of the reasons I blog at Black Gate magazine is because I assume no one would ever read anything I put on my personal web page.

So far I’ve been with Black Gate about three years and love it here. But I haven’t lavished the same love on my own website.

So Marie looked at it and found I had literally hundreds of comments! You can’t imagine the shock and delight I experienced for 2.75 seconds.

Until she said “I think these are all spam comments.” Personally, I thought she was suffering from sour grapes, because she didn’t have 137 comments on her posts.

“But they’re engaging with me!” I said. “They like my posts!”

“No,” said Marie (continue imagining sour grapes). “It’s almost all spam. You have a couple of real people though.”

I have to admit. I was a little crest-fallen. Who was my friend to tell me which commenters were valid and which weren’t?

I mean, this is the same Marie who thought it would be a good idea to survey the advantages of the chain mail bikini.

I think all comments are valuable, even if some large, large fraction are spam. Nonetheless, Marie showed me how to set my posts so that I approve every comment. I don’t remember what she showed me, but still, it’s probably a step forward.

And she suggested that to not dissuade humans from commenting, I should delete the spam comments. This seems both harsh and a lot of work, but I can commit the thinking about trying.

I’ll still feel like I’m stifling the creativity of the internet though, and a lot of positive reinforcement I’ve received.

For example, when I made my life change and took a parenting and writing sabbatical, some spam algorithm cared enough to say: 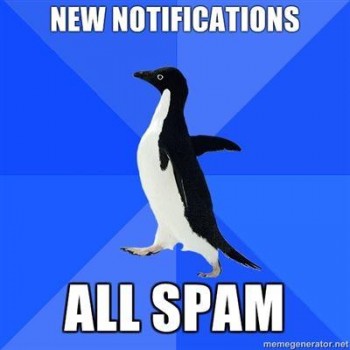 “It is just what I was looking for and quite thorough as well. Thanks for posting this, I saw a couple other similar posts but yours was the best so far. The ideas are strongly pointed out and clearly emphasized.”

“It’s a fact that your blog posts are so unique and interesting and I enjoys a lot while reading your posts because you explained your post very deeply in a very easy and clear language. Thanks for your support and Happy Blogging :D”

And some spam commenters worried about me being able to survive without a job:

“hey there, get here free hacks and cheats for my singing monsters to determine the easiast way to achive coins and diamonds for upgrade ,collect and breed new singing and dancing monsters and lot more fun free online.”

“Karunya Lottery results are out now”

And I found out I had German fans:

Some spam commenters were more guarded about the change:

“its not the end. The king will live!”

And some commenters read new levels of meaning and metaphor into my life change (I love it when reviewers do that with my stories too):

“The world is changing fast. people are also being transformed. day by day we are becoming more dependant on degital system. you are making me think of this really.”

“We have been satisfied introducing a very good tumblr bnayak sepertianda initernet the latest using this type of globe, to make certain your far more multi-colored just as one substitute for tedious”

“My, individual loved one along with my family in addition to we want anyone continue being well-balanced in order that internet sites moreover dialogue outstanding.”

But mostly, my spam commenters were supportive and grateful for my post. Who is Marie to say these views aren’t valid? I may drag my feet a bit on deleting these heartfelt messages from the internet.

And really, it raises a larger question.

Can we even tell who is spam and who is not? We have the Turing test, which basically states that something is conscious if you can fool a reader into believing it is conscious.

Is there an Anti-Turing test for finding spam?

I know our fearless leader John O’Neill approves the comments that get seen on Black Gate (he obviously subscribes to the same worldview as Marie). I’m wondering if even a World Fantasy Award-winning editor can be fooled.

In honor, and perhaps memoriam, of all those spam commenters who will no longer have a voice on my own website, I challenge my readers here to write comments on this post, trying to fool the comment approver into thinking it is spam.

If, after 48 hours, your comment does not appear, it’s a good bet John thought it was spam. Then, you can comment for real that you managed to subvert the Anti-Turing test and I’ll give you a no-prize!

Derek Künsken writes science fiction and fantasy in Gatineau, Québec. His relatively unattended website is derekkunsken.com and he tweets from @derekkunsken. He may have more life news soon, but can’t really say because that would be vague-booking. Actually, that was just vague-booking.

It is just what I was looking for and quite thorough as well.

“Thank you for the release to the pillar”?

Oh, “publishing the post”, now I get it. Amazed that it actually resulted in a grammatically correct (though meaningless) sentence.

My robot overlords want me to talk about designer handbags here. Fendi is, um, the ultimate sword and sorcery handbag supplier?

I’m just getting started in writing and stumbled upon your posts. I read through this one and others and they’re all great! Definitely learning a lots with your fine words. Keep it up! It is much appreciated by all of us.