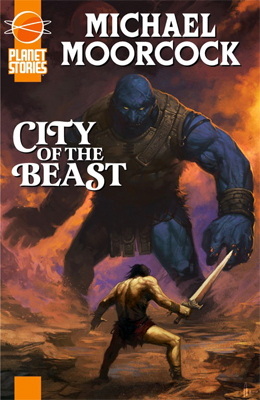 “I enjoyed it enormously. It was kind of a holiday for me,” Michael Moorcock once remarked about writing the “Kane of Old Mars” series. Reading the first of these novels, City of the Beast, is exactly like taking that holiday with Mr. Moorcock. Imagine chucking all your possession so you can buy a fancy red convertible and then tearing out to Florida without a care in the world. That’s City of the Beast. It has that “hell with it, let’s go for a ride!” feel. The book is a rare case of genuine escapism, and one of few times I can use the word “escapism” without thinking that I am ducking my responsibilities as a reviewer.

The hero of City of the Beast and the two following novels (Lord of the Spiders and Masters of the Pit) is the valiant Michael Kane. Kane is an incarnation of Moorcock’s Eternal Champion, but readers do not need to know anything about this overarching concept to enjoy the book. Kane’s science-fantasy adventures on a quaintly impossible Mars unabashedly imitate Edgar Rice Burroughs’ tales of John Carter, with dashes of other early pioneers of scientific romance like Leigh Brackett.

This new edition of City of the Beast from Paizo Publication’s division Planet Stories marks the first occasion since 1979 that the novel has appeared in the U.S. outside of omnibus editions. It was originally published as Warriors of Mars (a more Burroughsian title that I actually prefer) in 1965 under the hysterical pseudonym of Edward Powys Bradbury. The new edition’s introduction from former Amazing Stories editor Kim Mohan more than adequately warns readers that what they’re about to encounter is a “ripping yarn” in the truest sense.

The novel begins with a prologue that explains how a fictional version of the author — Mr. Bradbury — meets the mysterious American Michael Kane in France. Kane offers an astonishing tale about how an experiment in matter transmission zapped him to the fourth planet during the Mesozoic era (which neatly dismisses any scientific inaccuracies with current knowledge of Mars). Mr. Bradbury records the incredible details that follow. The stranded Kane learns that the Martians call their planet Vashu, and he falls in love with Shizala, the princess (Bradhinaka) of the city of Varnal. Shizala cannot return Kane’s love because of her betrothal to the suspicious prince of Mishim Tep. But there’s no time to dwell on the love triangle, as brutish blue giants, the Argzoon, attack Varnal. Fortunately for Kane, he has a background in fencing from a dedicated French instructor as well as knowledge of general butt kicking from his time in Vietnam. In the chaos of battle, the enemies of Varnal kidnap Shizala. The classic Burroughs formula now jump-starts, and Michael Kane wars across the wonders and terrors of Mars to rescue his love. The story rockets along with a procession of battles, chases, traps, and escapes. An underground city, unexpected allies, a pit with a sinister monster, a beautiful femme fatale – it’s all the pulp you could want packed into a hundred and fifty pages. Moorcock zips through it all with a simple but engaging style that ignores subtlety but delivers a straight show of old-fashioned thrills.

Some context highlights what Michael Moorcock wanted to achieve with the Kane series. In the mid-1960s, the young writer had started to emerge as one of the most important voices in the New Wave of science fiction that was breaking down the old Astounding establishment. At the same time, he owed his early inspiration to the wild worlds of Edgar Rice Burroughs and (appropriate considering the publisher of the current edition) Planet Stories. In the middle of producing and editing work in New Worlds magazine that was designed to set the revised standards for fantasy and science fiction of the future, Moorcock turned out this trilogy of novels written in a style forty years in the past. “[I]t seemed to me just then,” Moorcock wrote in an introduction to an earlier omnibus of the Kane novels, “that it wasn’t a good idea to be talking about the breakdown of genre conventions whilst producing a trilogy of romances which exemplified, even exalted those conventions.” Hence the invention of the Edward P. Bradbury pseudonym. Mohan’s introduction offers some theories on why Moorcock chose this weird conglomerate of names as his pen name (alphabetically close to “Burroughs” on the bookshelves?).

Moorcock wrote the Kane novels during a prolific period in his career. He probably poured an entire weekend into City of the Beast. (His own memories are that it took a week to write all three books.) It does have that delirious, headlong feel to it; Moorcock had a rush writing them and the reader feels that energy.

If City of the Beast has a serious flaw, it is that it moves a bit too fast. Most readers will finish the novel in two days, or even one, and with a stand-alone edition like this there’s no second novel to hop right into. However, if the only bad thing you can say about a book is that it makes you want to read the sequel immediately…well, that’s better than I can say for some of Moorcock’s more overtly serious work.