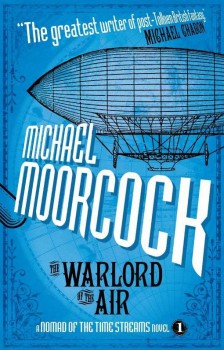 But their accomplishments don’t end there. Starting in January of this year, Titan began reprinting Michael Moorcock’s early steampunk trilogy Nomad of the Time Streams, beginning with The Warlord of the Air, originally published way back in 1971:

It is 1973, and the stately airships of the Great Powers hold benign sway over a peaceful world. The balance of power is maintained by the British Empire – a most equitable and just Empire, ruled by the beloved King Edward VIII. A new world order, with peace and prosperity for all under the law. Yet, moved by the politics of envy and perverse utopianism, not all of the Empire’s citizens support the marvelous equilibrium.

Flung from the North East Frontier of 1902 into this world of the future, Captain Oswald Bastable is forced to question his most cherished ideals, discovering to his horror that he has become a nomad of the time streams, eternally doomed to travel the wayward currents of a chaotic multiverse.

The first in the Nomad of the Time Streams trilogy, The Warlord of the Air sees Bastable fall in with the anarchists of this imperial society and set in train a course of events more devastating than he could ever have imagined.

These classic novels have been out of print for some fifteen years. Titan has already released the second, The Land Leviathan, on April 16; that volume finds Bastable in an alternate 1904 devastated by a terrible war waged with futuristic weapons and deadly biological attacks. The third and final volume, The Steel Tsar, follows Bastable’s adventures in an alternate 1941 where both World Wars were averted and Russia is still ruled by Tsars, and Bastable finds himself imprisoned by the rebel ‘Steel Tsar,’ Joseph Stalin. It will be released on August 13.

I’m surprised to hear the trilogy has been out of print for so long. I read pretty much everything Mike Moorcock wrote and I remember enjoying these books. Given the time-frame, I’d see them as an important influence on steampunk rather than steampunk per se, certainly when it comes to one particular trope: airships. There are lots and lots of airships in ‘The Warlord of the Air’

I read this trilogy last year. They had languashed on my “to read” shelf for years. The first two were a happy coincidence in a job lot of Moorcocks I picked up off eBay a decade ago. Had to search a bit for Steel Tzar.

All in all very enjoyable. Although perhaps a bit formulaic in terms of especially Steel Tzar was almost like a rewrite of Warlords.

> All in all very enjoyable. Although perhaps a bit formulaic in terms of especially Steel Tzar was almost like a rewrite of Warlords.

Moorcock used to talk about writing many of his early paperback originals in 3-4 days of sleepless energy. If there’s any truth to those tales, I’m astounded the plots aren’t MORE similar.

I haven’t heard of these before, but then I’m not typically bothered by the steam punk sub-genre (is it a sub-genre? I’m not entirely sure)
I do have to say though, these sound pretty cool, maybe I’ll check them out

[…] also looked at much of Moorcock’s canon here on the blog, most recently The Warlord of the Air, his Von Bek novels, and his Hawkmoon books, including The Chronicles of Castle […]