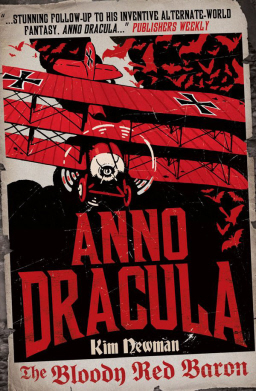 Okay, technically, this is both a Vintage Treasure and a New Treasure. It’s a brand spanking new edition of a novel that came out nearly two decades ago, in 1995.

But what a novel. The sequel to Anno Dracula, one of the most acclaimed vampire novels of the 90s — an alternate history in which Count Dracula has killed Van Helsing, married Queen Victoria, imposed a police state and launched a terrifying new era of British vampire domination — The Bloody Red Baron picks up the story a few years later, at the dawn of World War I:

It is 1918 and Graf von Dracula is commander-in-chief of the armies of Germany and Austria-Hungary. The war of the great powers in Europe is also a war between the living and the undead. Caught up in the conflict, Charles Beauregard, an old enemy of Dracula, his protégé Edwin Winthrop, and intrepid vampire reporter Kate Reed go head-to-head with the lethal vampire flying machine that is the Bloody Red Baron…

It’s become a fascinating game to pinpoint the source material for his numerous minor characters, drawn from The Lone Ranger, The Forsyte Saga, The Picture of Dorian Gray, Howards End, The Lost World, The Prisoner of Zenda, The Vampire Tapestry, Oliver Twist, Interview With The Vampire, The Threepenny Opera, Varney the Vampire, Count Yorga, Drachenfels, The Soft Whisper of the Dead, and the movies Gunga Din, They Thirst, Blood of the Vampire, The Kiss of the Vampire, The Most Dangerous Game — and even Blacula, The Fearless Vampire Killers, El Vampiro and The Werewolves of London (just to mention a few).

Newman plays the same game with The Bloody Red Baron, although I won’t ruin it by identifying his source material (a cheat sheet is here). This omnibus edition also includes a brand-new novella, “Vampire Romance,” in which Genevieve Dieudonne infiltrates a singular vampire gathering in the service of the Diogenes Club.

Anno Dracula: The Bloody Red Baron is 592 pages in over-sized trade paperback, priced at $14.95 ($9.99 for the digital version) from Titan Books. It was released in April; Titan recently re-published Anno Dracula and announced plans for the next two in the series, Dracula Cha Cha Cha (October 2012) and the never-before-published Johnny Alucard (April 2013). They also published Newman’s Professor Moriarty: The Hound of the D’Urbervilles last October.

All my recent Vintage Treasure articles are here; you can see the latest New Treasures here.

[…] Newman is the author of the classic vampire novel Anno Dracula and its many sequels (including The Bloody Red Baron, Johnny Alucard, and Dracula Cha Cha […]