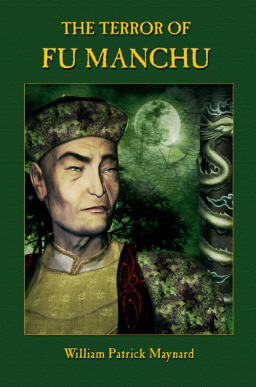 Usually I don’t read stories and novels based on a character created by one author and then later written by another—not if I have already read the original author’s work. Back in the day, I read all the pastiches: Conan, Red Sonja, Bran Mak Morn, Cormac, Kull, Black Vulmea… and have enjoyed many of them. I’m even friends with a few of the writers (and a collaborator with one) who were lucky enough to have been chosen to carry on with Robert E. Howard’s characters. But nowadays there are just too many new characters, too many new stories and novels to read, and time and money seem to be in limited supply the older I get.

All that being said, let me tell you a little bit about William Patrick Maynard’s wonderful novel based on Sax Rohmer’s immortal character, The Terror of Fu Manchu, which was published in 2009 in a beautiful edition by Black Coat Press. I had already heard many great things about Maynard’s novel and was familiar with his writing from the stories he published through Airship27 Productions.

So I decided to read this novel and man, I’m glad that I did. It opened up a whole new world for me, and as a fellow writer, it taught me a few things, too.

Now, I have never read any of Rohmer’s original novels, though of course I’m very familiar with Fu Manchu by way of the Boris Karloff, Warner Oland, and Christopher Lee films. So I did a little digging around and sampled enough chapters of several of Sax Rohmer’s novels in order to familiarize myself with his writing, and to see how well Maynard’s style captures the essence of his work.

Doing that also added to my enjoyment as I immersed myself in Maynard’s version of the Chinese mastermind and one of literature’s greatest villains. However, this being the 21st century and not the early part of the 20th, I thought some of Rohmer’s writing to be a bit old-fashioned and a little slower-paced than we are accustomed to in this fast-moving age of cell phones, CGI, and all things high-tech. But Maynard breathes new life and a touch of modern sensibility in his novel, while remaining faithful to Rohmer’s original vision.

Bill has successfully captured Rohmer and brings to life the world the author so deftly created. He adds a great element of fun and immediacy to the relationship between the legendary characters of Petrie and Nayland Smith — and he totally has Smith’s wicked sense of humor nailed down. Maynard gives us an even more mysterious and fully-realized Fu Manchu, and where plot, characters, prose and pacing are concerned… he succeeds wonderfully. And being that this novel is told in the first-person, by Petrie himself, he captures Petrie’s voice and has it down pat. To me, that speaks volumes about Maynard’s talent.

The Terror of Fu Manchu is set in London and Paris in 1913, shortly before the start of WWI. It begins with the murder of Daniel Eltham, a former missionary during the Box Rebellion in China, a man of God now involved in all things occult. We also meet Ursula Trelawney, the first woman allowed to become a member of the Brotherhood of the Magi, an organization deeply involved in the occult and Devil worship, and eventually learn what part she plays in the story. The plot revolves around a number of strange murders, a deadly poison, and some truly bizarre hallucinations. Oh, did I fail to mention the snowmen? Maynard has a most original and effective use for snowmen. You’ll see what I mean when you read this well-written and exciting novel.

At the heart of the story is the Seal of Solomon — a ring that gives the wearer the power to control demons. While trying to solve the murder of Daniel Eltham and a number of other missionaries who were also in China during the Boxer Rebellion, Petrie and Smith are caught in the middle of two factions who want to get their hands on the ring of King Solomon: the Brotherhood of the Magi and the Si Fan (old Fu Manchu’s terrorist organization). During the journey through the pages of Fu Manchu’s world, we meet Gaston Max, the French detective, and Greba Eltham, the daughter of the late Daniel Eltham. Some romantic sparks fly between Greba and Petrie, but alas, he seems doomed to never let go of the memory of the love of his life, Karameneh, who is now a slave and bride of Fu Manchu.

Maynard’s prose is crisp and clean when called for and beautifully descriptive where it needs to be. One of his more lasting images occurs in chapter 22, “Man of God,” wherein Catholic missionary John Eltham’s assignment in China is recounted. Maynard’s hand paints this with such skill and authority that I felt as if I was in China and he was telling me of his own personal experiences.

There’s a nice use of Lovecraft’s Old Ones, too, and a touch of social commentary regarding terrorism, which has always been at the core of Rohmer’s stories, as well as in the secret agent novels of James Bond and other spies like him. The twist in the climax to Maynard’s novel is a great pay off, and the Epilogue paves the wave for a sequel.

The Terror of Fu Manchu is great stuff, the real thing, and I applaud Bill Maynard for bringing this novel to life. I highly recommend that you seek out a copy and bury yourself in the action, mystery and romance that are so expertly set down for our enjoyment. And I’m already planning on reading Bill’s second novel of our favorite Chinese criminal mastermind.