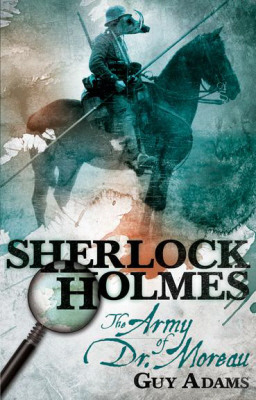 We see a lot of exciting, original fantasy every week here at the roof-top headquarters of Black Gate magazine. It’s good to see the genre is still filled with invention, and hot new writers throwing out new ideas like sparks off a forge.

But I’m not always in the mood for the new. Sometimes what I want is a fresh take on some of my old favorites. That’s why I enjoy Cthulhu fiction, for example, and William Patrick Maynard’s excellent Sax Rohmer articles and novels.

And that’s why I was very intrigued by Guy Adams’s Sherlock Holmes: The Army of Dr. Moreau, a potent literary mash-up that combines H.G. Wells and Arthur Conan Doyle. Guy Adams is the author of the Sherlock Holmes novel, The Breath of God, as well as The Case Notes of Sherlock Holmes and the horror novels The World House and Restoration. He’s also written several Torchwood novels, and a number of tie-ins to the TV series Life on Mars. Here’s the description:

Following the trail of several corpses seemingly killed by wild animals, Holmes and Watson stumble upon the experiments of Dr. Moreau. Through vivisection and crude genetic engineering, Moreau is creating animal hybrids, in an attempt to prove the evolutionary theories of Charles Darwin.

In his laboratory, hidden among the opium dens of Rotherhithe, Moreau is building an army of “beast men.” Tired of having his work ignored — or reviled — by the British scientific community, Moreau is willing to make the world pay attention using his creatures as a force to gain control of the government.

Any book that combines hidden laboratories, genetic engineering, Sherlock Holmes, and a plot to take over the world gets my attention.

Sherlock Holmes: The Army of Dr. Moreau was released on August 7 by Titan Books. It is 290 pages in trade paperback, priced at $12.95, or just $7.99 for the Kindle version. You can read the first two chapters here.

Holmes is one of the most popular characters in radio, movies, books, television, magazines, etc. In order to define the mind of Sherlock Holmes, you must understand the mind of his creator, Sir Arthur Conan Doyle. Doyle was a complex man, considered by some to be eccentric due to his preoccupation with spiritualists
What if Sherlock Holmes really existed? Was Sir Conan Doyle really Dr. Watson? He was a medical doctor. OR, was he both Holmes and Watson; a split personality? My ebook novel, BLOODGUILTY, poses that question and answers it. It is available on the KINDLE bookstore by RAYMOND THOR. Click here:
http://www.amazon.com/gp/search/ref=sr_nr_i_0?rh=k%3Araymond+thor%2Ci%3Adigital-text&keywords=raymond+thor&ie=UTF8&qid=1344014633

[…] from Angry Robot, and his novel of hidden laboratories, genetic engineering, and Sherlock Holmes, The Army of Dr. Moreau (August, 2012). But it was his gonzo fantasy-western The Good The Bad and the Infernal, released in […]

[…] wrote up his novel of hidden laboratories, genetic engineering, and Sherlock Holmes, The Army of Dr. Moreau, back in August, 2012, and his noir jazz club mystery Deadbeat: Makes You Stronger last October. […]

[…] wrote up his novel of hidden laboratories, genetic engineering, and Sherlock Holmes, The Army of Dr. Moreau, back in August 2012, and his noir jazz club mystery Deadbeat: Makes You Stronger last October. But […]