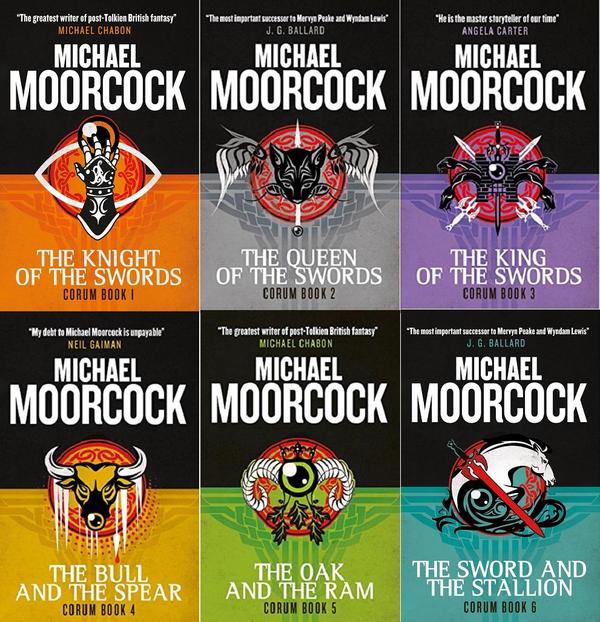 I was talking about The Chronicles of Corum, which Fletcher Vredenburgh calls “the most intense and beautiful books” in Michael Moorcock’s Eternal Champion series, in a Vintage Treasures post recently. I was unaware at the time that Titan Books was planning to reprint the entire series in high quality trade paperback editions. If I was, I wouldn’t have spent all that time and money tracking down the 1987 Grafton paperback.

The first, The Knight of the Swords, was published on May 5th. The other five will be released over the next five months, as follows. 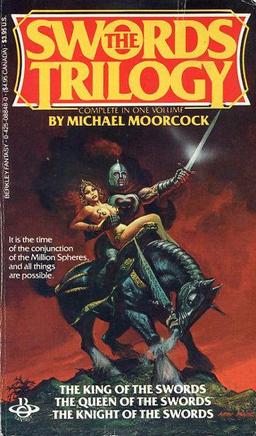 The first three volumes were originally published in 1971, and then collected at The Swords Trilogy (1977). They were followed by the last three books in 1973-74, collected as The Chronicles of Corum in 1978.

This is one of Moorcock’s most successful and enduring fantasy series, and I’m very pleased to see it return to print in handsome new editions. Check out these books by the author Michael Chabon calls “The greatest writer of post-Tolkien British fantasy.”

Each volume costs $9.95, or $7.99 for the digital versions. The cover art is by Funny Little Fish/Dreamstime.

I can’t even keep up with books I haven’t read yet, and they keep releasing books I want to reread.

I suppose it’s a good problem to have …

I think I’ve read the first three more times than I’ve read any other books by Moorcock. Even the tales of Elric. They’re hauntingly beautiful.

The cover illustration by Ken Barr on the Berkley edition of The Swords Trilogy is just so *wrong*. And yet I love the book and Berkley’s design and production of the text. Oh well, when was Love ever consistent or free from contradiction?

Well, it’s only wrong in the sense that it completely fails to accurately convey anything about the book or its characters. OK, technically, the book does include horses and armor and swords, but …

And having said that, yeah, I think that was the first Moorcock I ever bought with my own money and I do love that cover to this day.