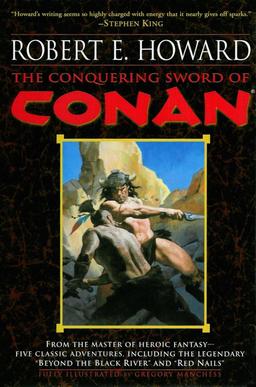 Howard Andrew Jones and Bill Ward are wrapping up their re-read of The Conquering Sword of Conan by Robert E. Howard, the third and final omnibus volume collecting the complete tales of Conan, with what Howard calls “my most pleasant surprise so far during the re-read,” the story “The Black Stranger.” It was never published during Robert E. Howard’s lifetime, appearing for the first time in Karl Edward Wagner’s anthology Echoes of Valor in 1987. Here’s Bill:

Like “Beyond the Black River” which precedes it, “The Black Stranger” is a tale set in the Pictish wilderness of Hyboria that sees a vulnerable outpost of civilization overrun by the wild men of the wood. But this time around the threat of the Picts — still an Amerindian analog — serve as more of a backdrop to the infighting and machinations of pirate captains, an exiled nobleman, and a cagey Conan. Again REH draws on the American frontier for inspiration, but it isn’t the dominant theme of the piece, which also manages to end on a far more up tempo note despite the carnage. Wild battles, double-crossing, pirate treasure, and a mysterious demonic stranger are all skillfully woven together into a complex but nonetheless fast-paced adventure that stands solidly alongside the better Conan stories.