A number of toy properties have been re-imagined in comic books. Some examples are the Shogun Warriors, The Transformers, Rom the Space Knight, He-Man and the Masters of the Universe, and G.I. Joe.

My own personal favorite was Marvel’s/Mego’s The Micronauts. The story of how Mego’s Micronaut toy line got turned into a comic is unexpected.

It turns out that Marvel writer Bill Mantlo’s son was opening up his Christmas presents in 1977, which included a haul of Micronauts (something that happened in my house that year too).

Mantlo was inspired by the toys and asked Marvel Editor-in-Chief Jim Shooter to get his hands on the comics rights, and voila!

Mantlo is famous for a lot of his off-the-wall creativity, most famously, his creation of Rocket Raccoon, but I think that he went on a world-building binge when he created the microscopic space opera world of the Micronauts.

Inner-space (the microscopic world) is a world cut off from our by a great barrier, and it’s filled with humans, aliens, different environments, all strung on what looks like a chemistry class’ model of long-chain carbon molecules.

The main thrust of the Micronauts saga begins with Commander Acturus Rann who, along with his robot Biotron, is just returning from a 1,000-year exploration. He’s been frozen all this time, using his telepathic link with Biotron to do stuff.

Unknown to everyone, his own sleeping journey has touched something called the Enigma Force which personifies itself as the Time Traveler, or many Time Travelers at once, which are all based on the templates of the dreaming Rann.

When Rann returns to Homeworld for a welcome parade, he finds instead a dystopian hell controlled by Baron Karza and his dog soldiers.

Mantlo paints with a surprisingly dark brush on Homeworld. Karza and his scientists rejuvenate the powers loyal to him by giving them the youthful bodies of political dissidents and rebels.

Rann escapes Homeworld with an odd-ball collection of heroes, including Prince Acroyear (an alien, Klingon-esque powerhouse), Princess Mari (the last survivor of the royal family of Homeworld), Bug (a swashbuckling tree-dwelling alien) and Microtron (a smart-talking R2D2 figure).

Despite making it away from Homeworld, they’re going to be toasted by the pursuing ships, until a Time Traveler appears and tells them to go through the Great Barrier. They do, leaving most of their pursuers to smash into the Great Wall.

The Micronauts emerge into a strange new world… called Florida, as people the size of action figures.

Part of the charm of the Micronaut comics is their adventures and misadventures on Earth. They run into giant barking dogs, lawnmowers, fly-swatters, etc with ironic, understated humor, as they fight off the last of Baron Karza’s pursuers who managed to follow them.

They also run into likely and unlikely friends and enemies. They fight molecule man, a weird bug collector (and mutator) called Odd John, and Andrew Lang the Ant-Man.

In the first year, the Micronauts manage to make their way back home and Rann has his spectacular showdown with Karza when Rann learns how to use the Enigma Force.

But, like the best comic book heavies, Karza is able to come back for a more spectacular battle twice more in the next six years.

Mantlo wrote a bunch of Micronauts adventures, with the occasional guest-appearances to help sales, but the real highwater marks of the series were hit whenever the Micronauts were on Earth experiencing it as miniature people, or when they were in the Microverse getting into the incredible detail of the world-building. 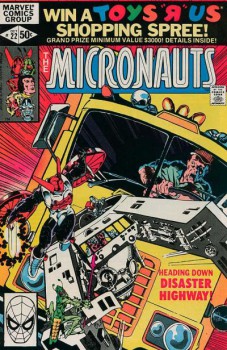 The best of these was a sprawling, year-long saga where the Micronauts had to explore the different worlds of the Microverse, like a snow-world, a water-world, Bug’s world, and so on, to recover new secrets of the Enigma Force that was written into a prophecy a thousand years ago.

It runs deep and creates a much larger mythos of the Time Travelers and Rann’s role.

I can’t say that reading the Micronauts comics made me any more likely to buy Micronaut toys, and in fact, the toys had a very short shelf-life.

After a while it was difficult to find them anywhere, while the comic series went on strong, until the mid-1980s, when it was replaced by a second Micronaut series.

However, I can see why this set of toys inspired Mantlo. He’s done space opera really well, and he’s consistently been a writer who avoided clichés, and in both those respects, he created something enduring and compelling for Marvel and for fans.

Micronauts was brilliant – they turned a bunch of toys mixed with cliche 60s pot-head stuff (what if our solar system was an atom in a giant’s finger…?) into a sci-fi epic worthy of Star Wars. Similar work was done on ROM.

Of course, Marvel dusted it off, chewed it up, and re-gurgitated it on new comic paper. Anyone reading, please look for the ORIGINAL series. New Voyages were cool, just not the 90s/00s whatever…

Sadly, Bill Mantlo left comics to become a lawyer, then had an accident and now is a victim of America’s Health – Non-Care $$sytem$$$

One of my fav characters was “Birotron” – not Bio-Tron, but Birotron – a robot – named after a rare, barely used pre modern synth sampler – uh, ever heard of the Mellotron? Someone made one with 8-track tape reels for easier swapping/sampling. Went over me as a kid, later getting into the Prog Rock as an adult and going back over the history I thought “Whoa….!”

Loved Micronauts! In fact, I just recently went back and filled out my collection, and am slowly rereading them. (Just finished the encounter with Psycho-Man.)

I never had the Battle Cruiser — a friend did, and I was insanely jealous. I did have the Astro Station, though (the flying lab) and plenty of figures.

One of the first Marvel comics I bought was an issue of Micronauts. I remember the story being confusing though so I never picked up another issue.

I also remember having a couple of the Micronaut toys though. If memory serves, I think I wanted the toys because they reminded me of Star Wars action figures at the time.

No mention of the artist, Michael Golden? He did some beautiful work for this title in a lush, distinctive style.
Issue #12’s cosmic duel between Acroyear and his evil brother Shaitan is some Epic Space Opera Action.
I understand there was a paperback collection of the first story arc but I’ve never seen a copy.

Hey GreenGestalt: I agree that the first 40-50 issues are the right ones. The next Marvel series became darker without importing what made them charming, and I was out of comics by the time other publishers were giving them a go.

Joe H.: Your jealousy is 110% justified. I feel your pain. There were a few other micronaut things I wanted, but never got and so have to build them out of Lego based on what I saw in the catalogue.

James M.: I totally get you on the confusion on getting in. My mom got me my first 4 comic books in my summer after grade 4 and one of them was Micronauts 12. I had no idea how to read comics and it was a bit baffling, but I loved them.

John: Yeah – Michael Golden is one of my favourite artists. He made the series, and Broderick was a good replacement. Marvel ruined a few issues with ugly early-career Chaykin art that is better suited to a Dark Knight feel than space opera, and with an issue or two of Ditko, who was equally inappropriate. All that said, Micronauts benefitted from the luck of some consistently good artwork.

I also remember that Micronauts was one of the first series to go to direct sale (as opposed to newsstand distribution), which caused me to miss a couple of issues while waiting for my subscription to kick in. (No specialty comic retailers in my hometown at the time.)

And here’s an io9.com article about how IDW is launching a new Micronauts series soon.

This was the most imaginative toy line I ever played with. The interchangeability was like getting a free new toy several times over. The comic book was also awesome and had a cool explanation for tying them into the here and now as their action figure size. Love the Prometheus Pit issues. For awhile my cousin and I talked to each other with the Bug-like “tik” mixed in. Loved the 70s.