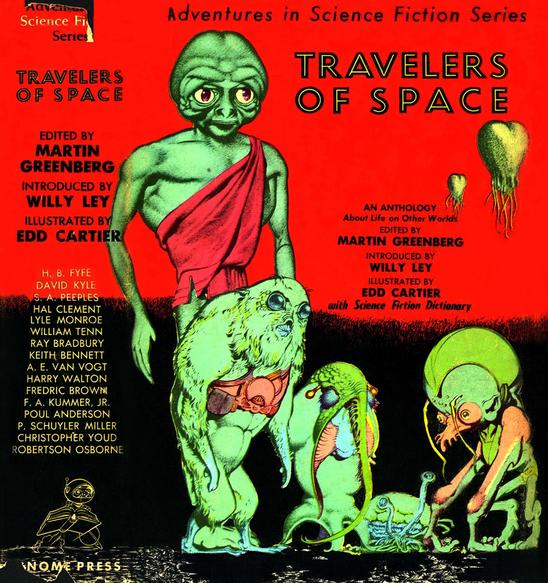 Gnome Press, the brainchild of Martin Greenberg and David A. Kyle, was founded in 1948, and it published some of the most important science fiction and fantasy of the 20th Century in hardcover for the first time — including Sixth Column by Robert A. Heinlein (1949), The Castle of Iron by L. Sprague de Camp and Fletcher Pratt (1950), Conan the Conqueror by Robert E. Howard (1950), I, Robot (1950) and Foundation (1951) by Isaac Asimov, City by Clifford D. Simak (1952), Robots Have No Tails by Lewis Padgett (1952), Judgment Night by C.L. Moore (1952), and Sands of Mars by Arthur C. Clarke (1952). The Gnome Press hardcovers — gorgeously designed and made with great care — are some of the most collectible books in the field.

For me however, the most desirable Gnome Press books are their original titles, and especially their anthologies, which gathered neglected short fiction from the Golden Age of science fiction pulps for the first time. They published several in their Adventures in Science Fiction series, all edited by Martin Greenberg, including Men Against the Stars (195), Journey to Infinity (1951), The Robot and the Man (1953), and Travelers of Space (1951).

The Martin Greenberg we’re talking about here is not the same Martin H. Greenberg who became one of the most prolific editors in the field starting in the mid-70s (and many of whose books ended up in my collection after his death in 2011). By the 1970s, Martin Greenberg had retired from the science fiction field, and Gnome Press had been defunct for over a decade.

But their books remain, and I’ve spent many years tracking them down. Travelers of Space is one of my favorites. It’s a gorgeous volume celebrating early tales of space exploration. In his review in the August 1952 issue of Astounding Science Fiction, P. Schuyler Miller observed that Greenberg had focused his selections on “largely if not entirely unanthologized stories,” neglected classics originally published in Astounding Science Fiction, Planet Stories, Thrilling Wonder Stories and Startling Stories.

The first edition, published in 1951, had a marvelous cover by Edd Cartier (above), who was already justly famous for his pulp covers for Unknown, Astounding, and other pulps . When the book was reprinted in 1953, it was given a new cover by Ric Binkley (below). 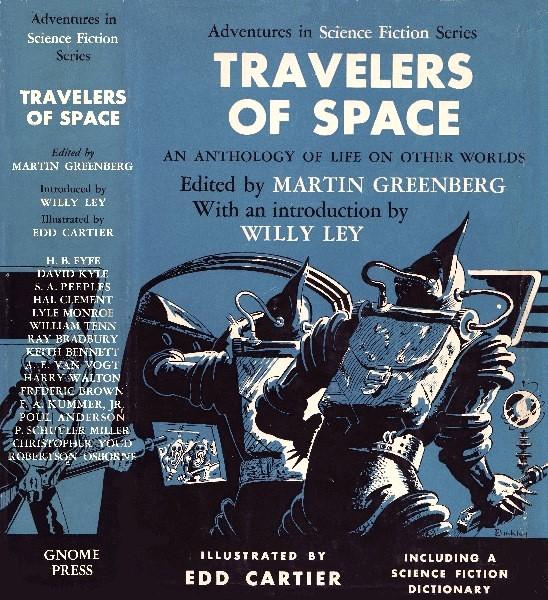 One of the most fascinating aspects of the book is the 16-page full color section “Life on Other Worlds” by Cartier, in which he presents an imaginative array of strange aliens. Here’s a few samples.

Click on any of the images for bigger versions.

I was lucky enough to have a long conversation with Gnome Press co-founder David Kyle at the 2012 Worldcon here in Chicago, and his reminiscences on his days with the press were fascinating.

You can learn more about the history of Gnome Press in Andrew Liptak’s fascinating article Kirkus Looks at The Meteoric Rise and Fall of Gnome Press.

Travelers of Space was published by Gnome Press in 1951, and reprinted in 1953 and 1955. It is 400 pages in hardcover, priced at $3.95. The original cover was by Edd Cartier and the reprint cover by Ric Binkley. It has not been reprinted in the past 60 years, and there is no paperback or digital edition.

If Lovecraft had gotten a look at those Cartier illustrations he would have boarded himself up in the Providence YMCA and never, ever come out.