Manly Wade Wellman, whom Karl Edward Wagner called “the dean of fantasy writers,” was one of the great 20th Century fantasists, particularly in the field of the “occult detective.” He created several memorable occult investigators, including Judge Pursuivant and John Thunstone. But his most enduring creation is surely Silver John, also known as John the Balladeer.

Silver John, a Korean War vet who becomes a wandering singer in the Appalachian mountains of North Carolina, appeared in around 20 stories published between 1951 and 1987, chiefly in The Magazine of Fantasy & Science Fiction, and later in anthologies like Shadows and Whispers. The stories were gathered in several volumes over the years, and these books are highly collectible today. In 1988 Baen Books released a complete collection of the Silver John stories in paperback, John the Balladeer, with a captivating painting by Steve Hickman.

The Baen edition was edited and with an introduction by Karl Edward Wagner. It also had a foreword by David Drake. It placed fifth in the annual Locus poll for Best Collection of 1988. 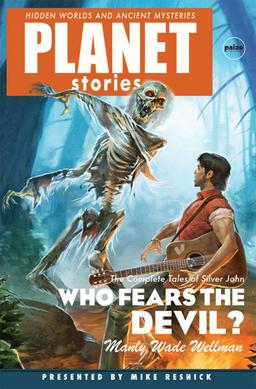 The Baen edition was advertised as “The only complete collection of Silver John!”, but that’s no longer true. In 2010 Planet Stories released a handsome trade paperback which collected all the Silver John stories, plus two proto-John stories that were first published in Weird Tales in 1946, Who Fears the Devil?

Sadly, that volume is no longer in print, and is getting harder and harder to find. Ryan Harvey did a detailed review for us here.

One of the great things about collecting paperbacks is that the vast majority, even many of the rarest titles, are available very inexpensively — usually less than the cost of a new paperback. Not so with the Silver John books, and especially not John the Balladeer. I’ve been trying to find a reasonably priced copy for many years, and have gotten used to seeing copies list between $38-$65 on eBay.

After many years of patient searching, I finally acquired the collection of three Wellman paperbacks below — including the Silver John novel The Hanging Stones, and an unread copy of John the Balladeer in terrific shape — for $18.60 on eBay. It’s true what they say… good things come to those who wait. 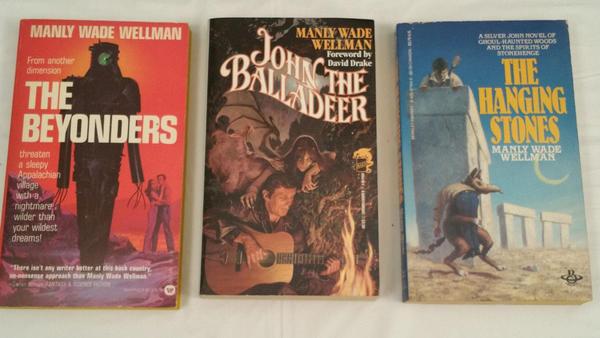 Vintage Treasures: Bow Down to Nul /The Dark Destroyers
Manly Wade Wellman, Fletcher Pratt, and Appendix N: Advanced Readings in D&D
Battle in the Dawn: The Complete Hok the Mighty by Fletcher Vredenburgh
The Lovecraft Circle at the First World Fantasy Convention by James McGlothlin
Alex Bledsoe on “How I Discovered Silver John”
The Best One-Sentence Reviews of Manly Wade Wellman
New Treasures: The Complete John Thunstone
The Nightmare Men: “The Enemy of Evil” by Josh Reynolds
The Nightmare Men: “The Judge” by Josh Reynolds
Who Fears the Devil? by Ryan Harvey

John the Balladeer was published by Baen Books in July 1988. It is 306 pages, priced at $3.50. The cover is by Steve Hickman. It was reprinted in hardcover by the Science Fiction Book Club in 1989. There is no digital edition.

I have the Baen paperback on the shelf by my bed. It’s truly a great collection. Wellman was a versatile fellow. He scripted The Spirit during the years Will Eisner was in the army.

I LOVE that Planet Stories cover.

Unfortunately I always found the Silver John stories better in concept than in execution. Not that the stories were ever bad– they’re evocative and entertaining. But try as I might, I never found them truly engrossing, and I never thought to myself hey, I feel like re-reading some Silver John.

Wellman, with his son, reworked Wells’ ‘War of the Worlds’ as a Sherlock Holmes adventure, also featuring Doyle’s Professor Challenger.

There was an electronic edition of John the Balladeer, distributed by Baen in the early 2000s as part of the Baen Free Library and on several of their free to distribute CDs. It was not in current ebook formats (.epub or .mobi), but was available in HTML, RTF, and a few other formats in use at the time (Microsoft Reader, Sony Reader, etc.)

“. . . I never thought to myself hey, I feel like re-reading some Silver John.”

Nailed it HAJ! These are good stories (I genuinely mean that)–but I also don’t ever plan on coming back to them. Isn’t that interesting though? In relation to this I can think of four categories of stories/books:

2. Liked it, hope and plan to return to it again (perhaps even many times).

3. Didn’t like it, probably won’t ever think about it again (until some Black Gate post revives my hate of it).

4. Didn’t like it, but there was something about it that sticks in my mind that (sometimes) gets me to come back to it.

I love the Silver John stories as well as the rest of MWW’s supernatural fiction. One of the few investments I’ve made in “fancy” books was all five of Nightshade Book’s collections a decade back.

The Silver John stories are some of my favorites of all time. But only the short stories, for whatever reason. I own several copies of Wellman’s novels, but I’ve only ever read one or two.

The Baen CD that’s mentioned above is actually available online. The full content of John The Balladeer is here:

It was part of a CD included with a David Drake novel, most likely because Drake’s homage to Wellman, Old Nathan, was also on the CD. That one’s well worth reading for anyone who likes Silver John.

There is a relatively obscure movie based on this character, The Legend of Hillbilly John. This clip shows some of the film as well as the special effects: https://www.youtube.com/watch?v=ReETky-b0TA

This is one of those things that, upon hearing a blurb or a pitch or just seeing a cover, I would have said I had no interest in. Thanks to Planet Stories, I got it as a subscription and discovered stories I love that I would have otherwise never given a try. I’m definitely keeping my copy not just for the awesome cover illustration nor to say I have the complete PS run, but so I can re-read it one of these days.

I am grateful to Doubleday for publishing the Silver John novels in the late 1970s and early 1980s. And that Baen collection is another to add to my search list.

I like John, a character of basic human decency whose only weapon is a silver-strung guitar and some folk songs, with the magic contained therein.

[…] the Comments (Black Gate) Vintage Treasures: John the Balladeer by Manly Wade Wellman — “Unfortunately I always found the Silver John stories better in concept than in […]

Will Eisner’s The Spirit at Quality – Who's Out There?

[…] in the medium’s history, when it came to both story and art. To name but a few favourites: Manly Wade Wellman, Jerry Grandenetti, Jules Feiffer, Wally […]