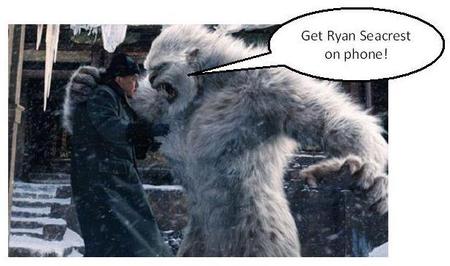 As a former Londoner of the ex-pat variety, I still regularly peruse the BBC web site for the morning news. Normally this consists of a rather broader version of world events than can be had from CNN, but rarely anything earth-shatteringly different.

Until this week when I came across an entirely legitimate article entitled:

Why Don’t People See the Yeti Anymore? by Candida Beveridge

Before I relay Ms. Beveridge’s hypothesis, I need to explain that a yeti and Bigfoot are not the same thing. For this I turn to Quora, a less foot-noted more emo version of Wikipedia:

The difference between the yeti and Bigfoot is regional. The mythology surrounding the yeti comes from the Himalayas near Tibet. Bigfoot is primarily based on North American native folklore.

More importantly, where Bigfoot currently has his own reality show on Animal Planet as well as his own Facebook page, and therefore presumably has a more of-the-moment public relations team, the yeti, who technically doesn’t even qualify to have his name capitalized, has largely dropped into the realm of fireside stories told to frighten the grandkids.

Apparently Candida Bereridge, reporter for the BBC World Service had to know why.

Until recently it seems, it was common for people in Bhutan (a small, landlocked country in South Asia at the eastern end of the Himalayas) to share stories of their encounters with the Himalayan yeti. But with the arrival of modern conveniences, villagers no longer need to climb high into the mountains to look for wood or grazing lands, which is where they once regularly encountered him. So a legend is slowly fading away.

In the days before electricity, much of a Bhutanian’s day would be spent searching for firewood to light stoves and walking up into the high pastures to graze their yaks and goats.

While out on the slopes, people would often come across an unusual paw print that struck chill into their hearts.

“I was about nine years old and had gone high up in the mountains to collect dry leaves for the cattle,” says Pem Dorji, a Bhutan woman in her late 70s who spoke with Ms. Bereridge. “That was soon after a heavy snowfall, which lasted for almost nine nights. The yeti must have come down, trying to escape the snow. I just saw the footprints the yeti left behind.”

Sixty years later, Pem still remembers the fear that overcame her. “I couldn’t stay there for a moment,” she says. She ran nearly all the way home.

“When I described the footprints to my father, he explained to me that yeti’s feet are pointed towards the back, unlike the feet of humans,” she says.

A common belief is that the yeti cannot bend its body, a feature it is thought to share with evil spirits, which explains why most traditional Bhutanese homes have small doorways. They raised the threshold and lowered lintel to force anyone who enters to lift their leg and bend their head, basically rendering their dwellings non-yeti compliant.

But these days the Bhutan people no longer need to go up to the mountain to collect wood or graze their animals. They cook on gas rings, and farming patterns have changed. The villagers spend more of their time growing cash crops such as potatoes and oil seeds instead of tending livestock. 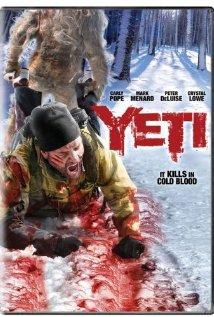 A local called Norbu who was interviewed by the BBC said;

We haven’t gone to the mountains for more than two decades now and we are really not sure if the yeti is still in our mountain ranges.   But it doesn’t matter, because there is no question the yeti is around somewhere. I don’t think anyone will ever find it. It’s just such a clever animal. It migrates from place to place, and with fewer people going up there, maybe it will never be found.

If the yeti ever wanted to be found to begin with, he was already fighting uphill. Like most things for which there is an American version, Bigfoot has always had a more robust publicity machine.

According to IMBD, Bigfoot has been the subject of 121 movies but the yeti only 11, and most of those were in the 1970’s.

So assuming, of course, that Guillermo del Toro never decides to vacation in Bhutan, it seems entirely possible the yeti will vanish to the realm of pure mythology forever.

If you’re interested, Yeti: Curse of the Snow Demon is the most recent, yeti-related movie, made in 2008 for TV; produced, directed and starring no one you’ve ever heard of. But you’re still welcome to post a comment or drop a line to sue@blackgate.com.