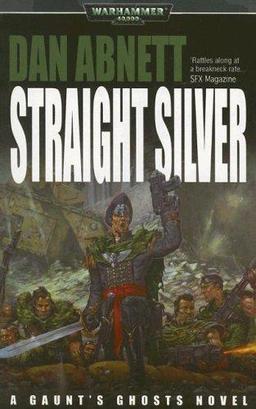 The world of Aexe Cardinal has been largely separated from galactic civilization for several centuries. Their technology is roughly on the level of ours around the time of the First World War — which is significant, because for almost half a century, the dominant nations of the planet have been in a deadlock with the Chaos-tainted Republic of Shadik. Their war is fought between lines of trenches across an ancient, toxic no man’s land. In all the ways that matter, it is the First World War, amplified in scale, duration, and stakes.

And who better to break a deadlock than the Imperial Guard, spearheaded by the tough-as-nails bravos of the Tanith First-and-Only?

The title, Straight Silver, refers to the foot-long war-knives carried by all the Tanith. I typically imagine them looking something like the classic Swiss bayonet. It’s a fitting title, because the cramped spaces of trench networks offer plenty of opportunity for blade-work.

After the intense battles of Honor Guard and Guns of Tanith, though, Straight Silver feels like a quiet interlude. There’s still plenty of fighting, but the only encounter which really stood out to me was a last-ditch defense of an isolated manor occurring in the last 20-30 pages of the novel. There’s another lengthy sequence where Gaunt personally leads a team across no man’s land to take out a battery of massive bombardment weapons, and while it’s certainly solid, it doesn’t particularly stand out from the other, similar sequences in the series.

Part of the problem is that, in recreating the conditions of a World War One style deadlock, Abnett hasn’t really given the Shadik troopers any unique features to make them more than generic bad guys — not even funny hats. It’s also not specified exactly how Chaos has affected them. The Shadik Republic thus stands out among the Ghosts’ adversaries only for its blandness.

The good stuff in Straight Silver is what happens outside of combat. There’s a fun subplot in which cold, handsome Major Rawne is severely wounded in a trench fight and, while recovering in the med-bay, finds romance igniting between him and his platoon sniper Jessi Banda. I also loved a scene where Varl fleeces Aexigarian troops through cock-fight betting.

The clash between Gaunt’s natural compassion and the demands of his Commissar office also come to a head. Dorden, the courageous chief medic of the regiment, is beaten by a group of Aexigarians appropriating Guard medical supplies, and Gaunt saves him by summarily blowing three men’s brains out with bolt rounds. Dorden’s compassionate heart is horrified, and later — when Gaunt comes to execute a man Dorden has spent hours saving — he puts himself bodily between Gaunt and his duty as commissar. For a sub-plot which occupies barely five or six pages of text, it’s incredibly moving, threatening the mutual respect and friendship built up between Gaunt and Dorden.

The most important conflict among the Ghosts might be the one between “Mad” Larkin and Lijah Cuu. Cuu carries a deadly grudge against Larkin from the events of Guns of Tanith, and Larkin — always twitchy to begin with — finds himself constantly glancing over his shoulder and even looking for a good opportunity to safely put a las-round into Cuu’s back. The situation escalates when they’re together on a scouting mission, and their platoon takes shelter from the weather in an old, abandoned manor house situated somewhere between the opposing battle-lines. The question of whether Larkin is cold-blooded enough to kill Cuu preemptively, or whether Cuu will put a knife in his back, builds from page to page.

Straight Silver isn’t a weak book, but I do think it suffers in comparison to what came before and what comes after. Its strong character building can’t fully compensate for the relative blandness of its battles in a series that, ultimately, lives or dies on the strength of its combat sequences.

It’s a good thing that the next volume, Sabbat Martyr, more than makes up for the weaknesses of Straight Silver. There’s a brief sequence in Straight Silver where Gaunt, trekking on foot after his truck breaks down, stumbles across a run-down chapel in the middle of the woods, kept by an old, blind nun in the colors of the Adeptas Sororitas (the Imperium’s fighting nuns). She delivers a prophecy, hinting to him that his brush with Saint Sabbat’s power on Hagia (in Honor Guard) is only the beginning of something much greater to come.

And boy, is the pay-off worth it. 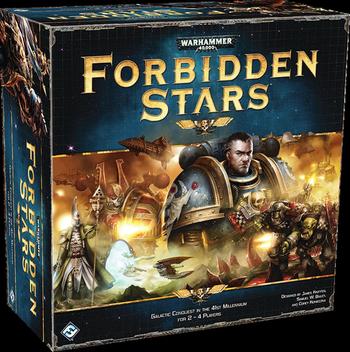 The other books in this series are:

Next Time: Sabbat Martyr, in which Abnett tops himself yet again.

Sean is currently living and working as an English teacher in Lviv, Ukraine. He keeps a blog at flinteye.wordpress.com, where he blogs about life in Ukraine, the art of teaching, and whatever stray thoughts flutter through the echoing chambers of his mind.

[…] mentioned last time that, out of the Gaunt’s Ghosts series thus far, I found Straight Silver the closest thing to […]