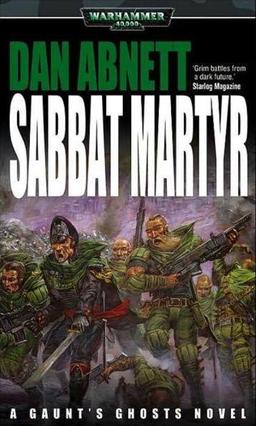 I mentioned last time that, out of the Gaunt’s Ghosts series thus far, I found Straight Silver the closest thing to a weak link. I have to give credit where credit is due, though: any novel that sets up a book like Sabbat Martyr is a novel I’m glad to have found.

The Ghosts novels seem to be roughly divisible into broad arcs. The first three books, retrospectively collected as The Founding, where an introduction to the broad cast of characters and a training ground for Abnett to find his groove as an author of military science fiction. The second arc, The Saint, began with Honor Guard, and finds its completion and climax in Sabbat Martyr. Sabbat Martyr picks up on the spiritual themes of Honor Guard, as well as key subplots from Guns of Tanith and Straight Silver, and loops them all together into a book that is easily the best Ghosts novel so far, and stands among the best books of its type I’ve read.

There’s a brief page at the beginning of each book, excerpted from a later Imperial history of the Sabbat Worlds Crusade, that briefly gives us a big picture of how the overall war is going. Usually, these don’t have much direct relevance to the plot, and are mostly there for flavor. The one for Sabbat Martyr, though, informs us that the Crusade is overstretched, bogged down in an assault on the key fortress world Morlond, and vulnerable to counter-attacks along its flanks. Urlock Gaur, Chaos Archon, is engaged at the front, but his lieutenants are circling like sharks to exploit weakness in the Imperial position.

In short, the Crusade needs a miracle.

That miracle seems to have arrived when Saint Sabbat herself is reportedly reincarnated. She selects the wasteland world of Herodor as her fortress, and personally requests the Tanith First-and-Only — who fought to defend her relics on Hagia — be transferred to Herodor to serve as her honor guard once again. 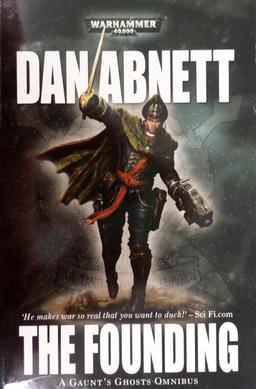 When Gaunt arrives at the Civitas Beati on Herodor, an ancient city founded by Saint Sabbat six thousand years before, the Saint’s reincarnation seems too good to be true. His suspicions seem sadly confirmed when he meets the reborn Saint and recognizes her as Sanian, a young priestess he met on Hagia. It seems that Lord General Lugo, an incompetent bureaucrat who oversaw the disaster on Hagia, has created the supposed incarnation from whole cloth, and is manipulating the Imperial faith for his own political gain.

Chaos warlord Enok Innokenti, however, is a believer. In a chilling prologue, Abnett shows him dispatching nine assassins to kill the Saint — one for each of the nine Holy Wounds that originally ended her life. These assassins come at the head of a massive Chaos legion, including hundreds of thousands of Blood Pact shock troops, tanks from light stalk-tanks to superheavy Baneblades, and wings of bombardment aircraft.

The Ghosts have always been disadvantaged in numbers, but Abnett goes climactic in this book, ratcheting the stakes up to new heights. The defense of the Civitas Beati isn’t a tough battle — it’s a desperate last stand, the kind of fight where the Imperial Guard are joined by civilians wielding shovels and cudgels, because death is coming for all of them anyway. And, while the reborn Saint initially appears to be a fraud, the truth about her is revealed to be quite a bit more profound.

The WH40K setting is notorious for its bleak outlook, and rightly so. But one of the hallmarks of the Ghosts books is their ability to reveal bits of warm humanity hidden in that setting. The genuine faith some of the guardsmen have in the Imperial religion is one of those, and Sabbat Martyr suggests that the faith of ordinary men can sometimes be rewarded, even in a galaxy tormented by never-ending bloodshed. Sometimes things break in favor of the good guys, and then it’s the maniacs and daemon-worshippers who should be running scared.

Sabbat Martyr is simply more and better of everything I’ve loved about the Ghost books so far. Nearly every character of note has some substantial role, or at minimum an awesome scene or two. Subplots going back to Honor Guard are capped off, particularly the subtle influence of Saint Sabbat over the Ghosts. Larkin’s continuing rivalry with the Ghosts’ own serial killer Lijah Cuu finally comes to its bloody end, and even the most beloved characters aren’t safe from the ravages of war. 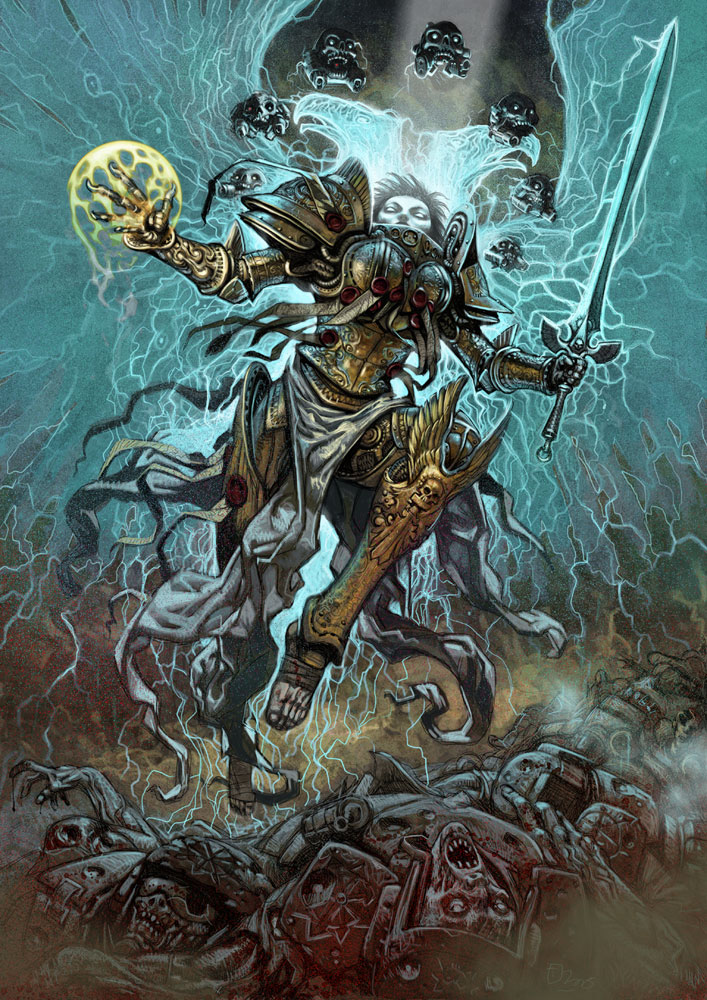 Well, one exception. I’m betting Gaunt is safe for the whole series, because his name’s right there in the title. But I could be proven wrong as the series goes on. In any case, if you’ve been following the series and have come to love the men of Tanith, there are scenes in Sabbat Martyr that will be hard reading. I will say that none of the deaths feels cheap—characters who need heroic send-offs get them, and I felt ultimately satisfied with their fates.

Agun Soric, a one-eyed Vervunhiver, first began to manifest psionic abilities in Guns of Tanith, and his precognition is a full-blown talent by Sabbat Martyr. In the WH40K universe, psykers and witches are subject to merciless execution, enforced by Imperial commissars and inquisitors. So when Soric realizes that he’s a full-blown psyker, and that his powers of precognition allow him to save lives, he begins to fear for his own. With good reason, too — Commissar Hark has caught wind of his exceptional ability to predict the locations of hidden enemies, or put himself in the exact right place at the right time. It resolves into a chase between two good men, each pursuing what they see as the good of their comrades.

I won’t try to futile (and exhausting) task of describing everything awesome in Sabbat Martyr, but here’s two more: First, one of assassins Enok Innokenti sends out is a dark Eldar. The existence of the Eldar in the WH40K setting betrays the settings fantasy roots, as they’re really just boilerplate elves transposed into space, but that doesn’t stop their evil cousins from being rather frightening villains, capable of butchering a man in seconds while his comrades stand just feet away with their backs turned. It’s good to see Abnett stretching his creative muscles to create villains more startling than the standard Chaos goons.

There’s also a chapter in Sabbat Martyr dedicated to the series’ first battle in space, as Imperial and Chaos fleets clash in orbit over the struggling Guardsmen. Abnett does a fine job of transposing the brutality of WH40K’s ground conflicts into vacuum, where death comes even faster to fighter pilots and ship’s officers than it does to Imperial guardsmen. 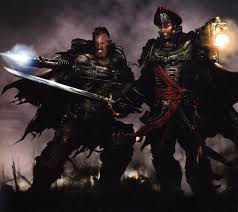 If you’ve been on the fence about giving this series a shot, Sabbat Martyr is the entry I’d use to tempt you. The first six books in the series were good, but they’re even better in retrospect, since they gave me the background to enjoy Sabbat Martyr. It’s one of the best military novels I’ve read in any genre, an receives my unqualified recommendation.

(I’ll note that it will be a while before I continue my Ghosts reviews, since I’m living in Ukraine through next summer, and so don’t have easy access to cheap Black Library books. I’ll probably have other scattered reviews to offer in the meantime, when I have time to write them between classes and private lessons.)

The previous books we’ve covered in this series are:

Sean is currently living and working as an English teacher in Lviv, Ukraine. He keeps a blog at flinteye.wordpress.com, where he blogs about life in Ukraine, the art of teaching, and whatever stray thoughts flutter through the echoing chambers of his mind.