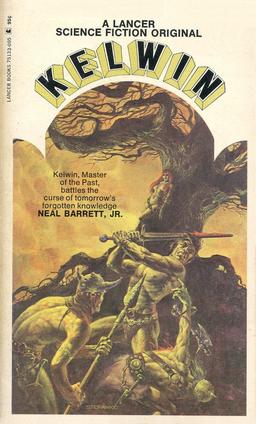 We have the makings of a small Neal Barrett, Jr. fan club here at Black Gate. It began when a discussion of his Aldair novels — which Fletcher Vredenburgh called “a blast of strangeness and adventure” — broke out in the comments section of a post about Mark Frost’s The List of 7. Shortly after Barrett’s death last year, Keith West briefly recounted meeting him at various conventions, and Fletcher reviewed The Prophecy Machine, the first of his novels of Finn, the Master Lizard Maker, saying:

I started it immediately and found myself in a fun, almost goofy story of craftsmen, duelists, animal people, and machinery not meant to be fiddled with by man…

From its first page, The Prophecy Machine heralds fun… Barrett has created a hilarious city of lunatics ruled by lunatic rules for Finn’s adventures to take place in… the book’s a lark. It’s funny and inventive from end to end. Jessica Slagg’s an amusing foil for the occasionally pompous and cocksure Finn. Sabatino’s exchanges with Finn are a funny mix of menace and camaraderie.

The only thing I can possibly compare it to is one of Jack Vance’s Cugel books. Like Vance, Barrett’s fantasy world doesn’t feel beholden to any real world setting. But the comparison really doesn’t do it justice. Barrett’s sly voice and Finn’s world are entirely his own.

I recently stumbled on a copy of Barrett’s first novel, Kelwin, a post-apocalyptic novel packaged as a sword & sorcery novel. It’s a fine example of 70s-era science fantasy, and I didn’t hesitate to make it mine.

Kelwin was released in paperback by Lancer Books in 1970 with a Jim Steranko cover. It has never been reprinted, and has now been out of print for 45 years. For Barrett fans, it makes a fine collectible.

Here’s the description from the back of the book:

From the Great Midsee to the two Calfrei’s, the year 2906 saw Nordland in upheaval. There were rumors of war as the pseudo-Sioux pushed south from the Indian confederation in a strange alliance with the yellow-skinned wizards of Hunan, far to the North… and for the first time since the Disaster of a thousand years earlier, all of Nordland seemed poised on the bring of annihilation. Into the middle of the war stirrings came Kelwin the Broon, finder – and occassionally manufacturer – of archaics, the tantalizing treasures that were all the remained of the world before Disaster. Aided only by his apprentice, Base, and armed with his wits and his half-knowledge of things better forgotten, it was his task to stop the war before the visitation of another Disaster…

Kelwin was published by Lancer Books in 1970. It is 223 pages, priced at 95 cents in paperback. The cover is by Jim Steranko.

Serves me right for not reading the comments section of every article – count me in for the Neal Barrett Fan Club! I just finished reading the Aldair books last summer, and what a pleasure they were – idea-filled, fast moving, satirical without being sour, frequently funny, always inventive. It’s a shame they’re not better known. With Barrett having died so recently, now would be a great time for DAW to bring them back. They’re so short they would all fit into an omnibus edition. Let’s start a petition!

Keith, Fletcher, looks like we found the president of our club! I’ll get to work on the t-shirts.

By the way, are you same Mel Odom behind THE THREAT FROM THE SEA?

The Aldair books are terrific. I read the first one when I was a kid and it blew me away and it’s held up well on repeated readings.