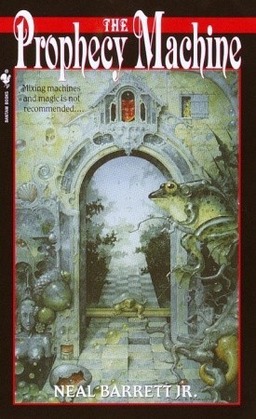 The late Neal Barrett Jr. wrote around thirty novels and seventy short stories. I’ve only read a little bit from his works, which include sci-fi and fantasy as well as crime fiction and magic realism. He seems to have slipped under the radar of most genre readers. On the other hand, everything I’ve read about the man marks him as one of those special authors held in high esteem by other writers.

My own experience with Barrett started when I found a copy of Aldair, Master of Ships in the attic. The back of the book hinted at the story’s plot, asking:

Where is humanity? What legacy has true mankind left to its manlike descendants that they must relive our past?

I was fourteen and that was enough to hook me. (In fact, only for a short, embarrassingly snooty period in my early twenties would that have been too pulpy to catch my eye.) Even so, I was struck by the strangeness of Barrett’s Roman Empire recreated with pig-men at odds with ursine and lupine barbarians. It took me several years to track down the other three books in that series, but it was well worth it. Now, of course, you can get all four together as a single e-book. There’s a wonderful strangeness and a blackly mocking sense of humor to these books that hold up well to this day.

My next run-in with Barrett also came about by accident. During a 1999 book run to the Montclair Book Center, I found the post-apocalyptic-set Through Darkest America (1987) and on a whim I bought it. Pretty much by the third or fourth page I realized I was not in a comic book, Mad Max world, but something so dismal and bleak it disturbed me to the marrow. What followed was an utterly grim coming-of-age story, where innocence is ripped away and violence is the standard.

When a second trip to Montclair secured me the sequel, Dawn’s Uncertain Light (1989), instead of joining in conversation on the ride home, I read most of the book, to the annoyance of my friends. The impact wasn’t as severe as the first book, but it still made me uncomfortable. Together, these books have a power that leaves me chilled if I just think about them for too long. If you think Cormac McCarthy’s The Road is the be-all and end-all of despairing post-apocalypse stories, I’m here to tell you you’re wrong and I’ll leave it at that. 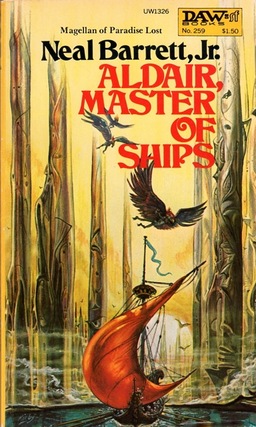 Those books made me a fan. So, when not too long after I read Dawn’s Uncertain Light, I spotted a brand new Neal Barrett Jr. book in Borders and I grabbed it. It was The Prophecy Machine (2000). I started it immediately and found myself in a fun, almost goofy story of craftsmen, duelists, animal people, and machinery not meant to be fiddled with by man.

The Prophecy Machine begins with the master craftsman Finn, his wife Letitia Louise, and the miraculous mechanical lizard Julia Jessica Slagg, aboard the good ship Madeline Rose and headed for a vacation on the beautiful Antoline Isle.

Finn is a craftsman of special mechanical lizards normally designed for household tasks like vacuuming or fire-tending. By chance — and by the inclusion of a ferret brain — his most recent creation, Julia Jessica Slagg, emerged from his shop sentient and sarcastic.

Letitia Louise is a Newlie. Several centuries before the start of The Prophecy Machine, two wizards conjured up great magics and turned nine animal species into nearly human beings, or Newlies. There are feline Yowlies, canine Bowsers, and batlike Vampies among the uplifted species. Finn’s wife is a Mycer, the people descended from common house mice. Nowhere in the world do humans consider it acceptable to marry Newlies, so Finn and Letitia Louise allow everyone to think she’s only his maid.

During a stopover in the filthy port of Nakeemo in the land of Makasar, Finn and his companions find themselves in the midst of the deadly antics of a band of religious fanatics called Hatters. The name comes from the tall yellow cones they wear on their heads. Only the intervention of Sabatino Nucci, a rough character Finn met earlier aboard ship, saves Finn and Letitia.

Unfortunately, their rescue leads to wilder and more dangerous circumstances once they enter the ramshackle mansion of the Nucci clan. Sabatino’s father, Calabus, claims to have built a machine that can slip forward in time and bring bits of the future back to the present. Something, however, is not right with the machine and he insists Finn examine and repair it. Finn’s refusal then acquiescence to Calabus’s demands lead to chaos.

From its first page, The Prophecy Machine heralds fun. Master Finn is standing on the deck of the Madeline Rose, wondering at the beautiful clean air when Captain Magreet approaches him.

“What’s that now, lad? Were you speakin’ to me, Master Finn?”

“Just muttering, sir,” Finn said, “taking in the air. And a lovely fine day it it, too.”

“Never been to sea before. I’ll bet I’m safe in sayin’ that.”

“Aye, then you’ve never heard the wind shrieking in the shrouds, never seen a fifty-foot wave comin’ at you in the night.”

“Neither have I. Hope to hell I never do.”

The captain, lost in some frightful image of his own, gripped the rail and stared out to sea.

Most conversations Finn finds himself involved in are equally frustrating and pointless. Save Finn, Letitia, and particularly Jessica, practically all the characters in the book are mad. Whether from rum, as in the captain’s case, or bad genetics in the case of the Nuccis, few in The Prophecy Machine are right in the head. While each encounter leaves Finn sputtering or at risk of a fight, the reader is always left amused.

Barrett has created a hilarious city of lunatics ruled by lunatic rules for Finn’s adventures to take place in. In addition to the Hatters who roam the streets by day, inflicting violence on themselves and anyone else they encounter, there’s another denomination called the Hooters, who rule the night with mad cries and fire. Hospitality is considered a sin, though of differing severity, by both sects.

Some people, though only the people already inside drinking, drink in an establishment called TAVERN, while others in one called CLUB.

“You see the sign, you see what it says outside?”

The man was growing puffy about the eyes. Behind him, Finn could see faces, pale little moons floating in the dark.

“They drink here. Other people don’t. These are the folks that drink here.”

“And where,” Finn wanted to know, “do the people who don’t drink here go?” 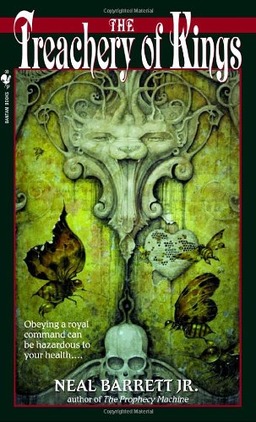 Not everything is ridiculous. The atmosphere of The Prophecy Machine is characterized by decay. Finn and Letitia’s efforts to leave the house of the Nuccis and the land of Makasar end in constant frustration.

And still, the book’s a lark. It’s funny and inventive from end to end. Jessica Slagg’s an amusing foil for the occasionally pompous and cocksure Finn. Sabatino’s exchanges with Finn are a funny mix of menace and camaraderie.

The only thing I can possibly compare it to is one of Jack Vance’s Cugel books. Like Vance, Barrett’s fantasy world doesn’t feel beholden to any real world setting. But the comparison really doesn’t do it justice. Barrett’s sly voice and Finn’s world are entirely his own.

Re-reading this fourteen years later, I was excited that not only did The Prophecy Machine hold up, but I like it even better now. If you’re tired of the doorstoppers and epics being cranked out, this might be just the sort of book you need to reinvigorate your appreciation of the genre.

Barrett wrote one more book featuring Finn the Lizard Maker: The Treachery of Kings. I haven’t read it yet, but I just moved it to the top of my to-be-read pile.

This brought back memories. It’s been years since I read The Prophecy Machine. I should reread it. And I haven’t read The Treachery of Kings yet, either.

If my memory isn’t faulty, “The Lizzard Shoppe” (Dragon Magazine, September 1998, #251) is the short story that started the series. If the ISFDB is correct, it’s never been reprinted.

Keith – Thanks, I wasn’t sure. I’ve got to find that somewhere.