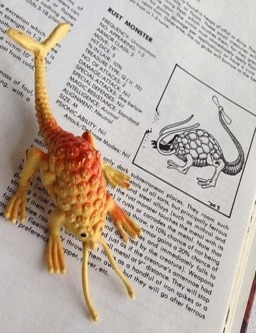 In an entertaining and brilliant bit of scholarship, Planescape artist Tony DiTerlizzi traces the origins of some of the most iconic monsters in Dungeons and Dragons — including the owlbear, bulette, umber hulk, and rust monster — back to an obscure line of plastic toy dinosaurs from the early 70s that Gary Gygax and Dragon editor Tim Kask co-opted as miniatures for early D&D sessions.

Painstakingly tracking down pics of the original toys — which doubtless wasn’t easy, as even small lots sell online for upwards of $500 to collectors in the know — Tony has assembled a line up of vintage toy monsters that will make your eyes pop. If you ran afoul of these creatures more than once in your early adventuring days, Tony’s collection of pics will give you more than one OMG moment.

But his most amazing evidence is a series of quotes from Tim Kask on just how these tiny plastic beasties eventually became an integral part of countless gaming sessions. I found this one, on how Kask created the bullette, at The Acaeum Forums:

I had an empty page in that issue of The Dragon because a full-page ad either cancelled or was late, and I had to go to press. Now Gary and I had had several talks about creating monsters, and he had frequently encouraged me to let my imagination run wild. The umber hulk and the rust monster were fabrications (by Gary) to “explain” two plastic monsters from a bag of weird critters from the dime store that Gary had found and used in Greyhawk… There was still had one that had not been taxonomically identified and defined yet that intrigued me; they called it the “bullet”. I frogged-up the name a bit. At this same time, SNL was hitting its stride and… I imagined what a “real” (in D&D terms “real”) landshark might be…

As Tony puts it, “Dime store toys in the hands of those with wondrous imaginations became something more – they became the geeky stuff of modern fantasy lore.” See his complete article Owlbears, Rust Monsters and Bulettes, Oh My! — and all his marvelous pics — at his blog, Never Abandon Imagination. (Thanks to Wayne MacLaurin for the tip!)

Wow, this was always a big puzzle to me as a kid — because I had these toys (still do I suspect, and now that I know they’re worth some money…) and it always confused me that they were in the Monster Manual.

My suspicion had always been that some toy guys ripped off D&D, but this of course makes more sense. Not sure why I leaped to that conclusion given that I had the toys well before I’d ever even heard of D&D.

And you know what — there was another plastic toy line, a more organized and branded one than these, that contained the spitting image of the Monster Manual orc, pig snout and all.

It had this cardboard castle playset, and consisted mostly of the orcs and various breeds of winged goblins with different weapons and hairy vs non-hairy legs. The orcs were really sweet, actually.

It all makes sense now…Gygax et al were playing with the same stuff I was.

OK, here is a great post with pics of some of those sets I’m talking about — and we’ve got ogres, shambling mounds, all the winged goblin demons you could want, and the spitting-image orcs:

Should be noted that these came later (though perhaps the molds could have been earlier), so they might be a case of the toy guys basing designs on D&D…so we’ve come full circle.

> OK, here is a great post with pics of some of those sets I’m talking about…

Thanks for the great link! That is awesome stuff.

I’ve never even *heard* of the DFC Fantasy playsets. How could I have missed out?? Clearly I was too old to be perusing the toy section at K-Mart in the early 80s. Ack! The fruits of teen pride are bitter.

Man, I really want a copy of that Dungeons of Castleton set. And The Tower of the Night. I’m going out on a limb before I make the inevitable trip to eBay, and say that these are astronomically expensive today.

[For those unable to access that link… that’s a current Buy-it-Now auction for a copy of DEMONS OF CASTLELON that looks like it was run over by a lawn mower. Price: $749.99.]

Interesting… I just noticed that the Tales From the Big Board blogger (Mouse) talks about DUNGEONS OF CASTLELON, but the eBay auction is for DEMONS OF CASTLELON.

Both include pics… so they’re clearly separate playsets. Meaning there’s at least one that Mouse didn’t even know about. No wonder these are considered to be so rare!

for those that want more rust monster

Think I bypassed buying these “They ripped off D&D…” though I had that dinosaur with his head turned sideways.

Also saw snake woman figures, though soft rubber and a scale above these…

I actually had – and LOST – a bunch of perfect “Snake woman” action figures around 01… Visited my Dad who lived in northern California, there was (no more) this cool toy store full of awesome toys. And in their bargain section, tons of plastic toys like this discussion. But one they had this woman’s top part merged with a loose but coiled snake figure, they must have really had fun mixing the molds. Since I was doing a fiction (scifi/fantasy merger) that included “Snake Women” I was inspired and bought a dozen at less than $1 each. Even had some with a centipede bottom…

I lost them, though, and here’s how. We went right next to some kind of new age thing Dad went to… And the ladies there noticed them. At first I just feared I’d be mocked, an adult playing with toys, but it was “What’s THAT…!?” and politely they grabbed them ALL from me… And I told the rest where I’d bought them… Dad explained that thereabouts when it was a certain ‘time’ a lady would place something cute but scary on her desk to warn people not to push her. Those weird toys were perfect for that. Still wish I’d kept one, but not that much $ and my upbringing I’m polite to ladies by default.

I love this post. It’s a fine example of “right place, right time,” because in the years since, all sorts of ridiculous rubber and plastic beasties have turned up in toy shops, but hardly a one of them has been put to use, or “reappropriated,” into some entirely different pantheon a la The Monster Manual.

But who knows what the next generation will do?

I had the Dragonriders of the Styx set as well as the Forest of Doom box. Great fun. They also sold booster packs that came with two dozen or so figures. Sold the lot of them for $100 on eBay five years ago.

Many of the designs were based on the illos in the 1st-edition Monster Manual. So yeah: toy imitating art imitating toy.

> I love this post. It’s a fine example of “right place, right time,”

Yes indeed. For me, Tony’s article has been a great reminder of the power of the imagination. That when kids are playing with toys, frequently what they’re doing is just as marvelously detailed and imaginative as any role playing game… it’s just not constrained by a bunch of expensive rule books.

When I first read his post, I thought, “How funny, it almost makes D&D look like nothing more than adults playing with toys.” But the tangible link of these early toys to D&D reminds me that the game is strikingly similar to the imaginative play of children – and perhaps the more I remember that, the better the game will be.

> Many of the designs were based on the illos in the 1st-edition Monster Manual. So yeah: toy imitating art imitating toy.

Ah! To think I missed out on an entire facet of early D&D because I thought I was too adult to browse the toy section at 16. Tsk.

And those play mats look like they would have made awesome game surfaces, especially if they were ideally sized for miniatures. Did you ever use them to play D&D?

I’ve been hunting down these original dime-store monsters that inspired Gygax for the past couple years now on eBay. I have re-aquired all of the “dinosaurs” that came in the original packages except for the one that inspired the owl bear. (I’ve been working up a feature to post as a blog here, but it looks like Tony stole some of my thunder).

I bought these same sets at the local dime store when I was a kid, and recognized the monsters immediately when I started playing D&D. Tim Kask and Tony DiTerlizzi confirm the connection (and Gygax himself once shared the toy-inspiration story in an interview somewhere, which I don’t have handy at the moment).

I also had those Dragonriders of the Styx and DFC play-sets, and have been busy reclaiming some of those childhood prized possessions as well. They came later — early- to mid-eighties — and as others have pointed out there is clearly a full-circle D&D influence. The DFC wizard figure, in fact, is the spitting image of the old TSR wizard logo.