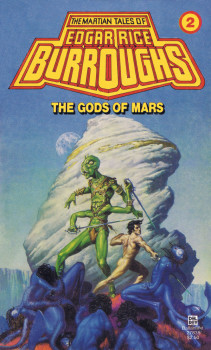 Last week, I reminisced about how some of my earliest scribbles were influenced by the interstellar dogfights I saw in Star Wars and Battlestar Galactica. I was always doodling — a look at one of my notebooks from any year of my schooling would testify to how it sustained me through boring classes.

There in the margins bloomed flora and fauna from the Dr. Seuss School of Zoology, spaceships, barbarians, and things that must have crept from the deeper recesses of the subconscious.

Needless to say, some teachers did not appreciate what they saw. I distinctly recall two occasions when my drawings elicited a phone call to my parents, followed by a dreaded talking-to by my father.

The first incident must’ve occurred in the third grade — that’s when I started reading Edgar Rice Burroughs’s John Carter of Mars series. I was immediately transfixed by Carter’s adventures on the red planet, and the creatures of Barsoom fueled much of my drawing at that time. In after-school daycare, I drew a Martian landscape rife with four-armed Tharks. I was emulating the Science Fiction Book Club illustrations (Richard Corben) as well as the Michael Whelan covers (those Ballantine paperbacks were the then-current editions that I checked out from my local library).

Problem was, I was no Corben or Whelan. In my attempt to portray the musculature of one thark’s buff pectoral muscles, I succeeded in drawing what one daycare worker interpreted to be bare BREASTS! (I understand comic-book illustrator Rob Liefeld would run into the same problem in the ‘90s with Captain America. Check out the image after the “Read More” jump to see one of the most anatomically challenged pieces ever rendered by a professional artist.)

When my dad got home, he started yelling at me, waving the picture in my face. At first I was bewildered — was there something wrong about drawing aliens? He and my Grandad were the ones who introduced me to ERB! Then it clicked, what my dad was protesting — and sure enough, when I looked at the drawing again, it looked like a four-armed, bald-headed, tusked woman wielding a pair of swords whilst wearing nothing but a loincloth.

It wasn’t more than three years later — sixth grade — that history would repeat itself. This time, though, it wasn’t a misinterpretation of the subject but of intent. I doodled a picture that my teacher promptly confiscated, then passed along to my parents (man, I wish they’d saved it). It was inspired by the artwork I was then seeing in publications like Mad and Cracked, and it portrayed a man shooting a hole through another man’s head. 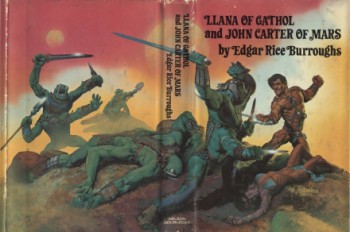 Now, this was years before the era of school shootings, and no, I never entertained any such fantasies. (My school fantasies tended toward: the school is invaded by aliens; I turn out to be the only one who can fight them; and then that cute girl really notices me.) I did not consciously identify with either the shooter or the victim in the picture; to me they were meant to be cartoon people committing cartoon violence of the sort I was seeing lots of in the comic-magazines I was then so enamored of.

I can only refer to a thirty-year-old memory, but I think the drawing was pretty good, with forced perspective so you could see through the hole in the guy’s forehead, and the bullet foreshortened so you could follow its trajectory that would take it over the viewer’s right shoulder. But boy did it send up a red flag for my teacher. 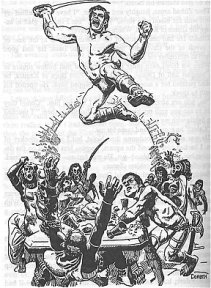 I don’t think my dad yelled as much this time around (portrayals of violence never seem to be as offensive in our society as portrayals of sexuality, right?). He just said don’t draw people blowing each other’s brains out again. The school did have me meet with a school psychologist, who administered some tests, said I had a high IQ, and put me in the gifted program. So it all worked out.

While I did continue to pursue drawing a little in my adolescence and young adulthood — doing political cartoons for my college newspaper and a few spot illustrations for small-press sf mags — I haven’t done much drawing in a while.

But I think the next time I do, my subject matter will be a nude female thark, all four of her hands gripping pistols, blowing cartoon holes through four villains’ foreheads. Just because I can.

That was funny! I have to agree that Captain America’s man boobs looked terrible. Art is difficult but that particular area is important to master be it man or woman. I have a new appreciation for how difficult it would be to draw a thark. There is more at play than four arms and tusks. Don Martin had some of the most violent cartoons but they were funny. I think my favorite was one where a kid was squeamish about pulling off a bandaid so his friend convinces him that faster was better. He ended up ripping the bandage off and two chunks of meat were attached to the adhesive part of the bandaid. It sounds horrible but it was hilarious. I got into trouble for reading a Mad Magazine in class and ironically we were discussing satire and sarcasm. Great post. This ape gives you two thumbs and three bananas up.

Thanks Wild Ape! I think I remember that Don Martin cartoon. I used to have some of the pocketbook collections of his stuff. The mad doodling of Sergio Aragones in the margins of the magazine I always enjoyed too.

[…] How Edgar Rice Burroughs and Mad Magazine got me into Trouble […]