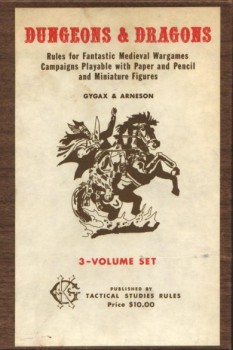 ONCE UPON A TIME, long, long ago, there was a little group known as the Castle and Crusade Society. Their fantasy rules were published, and to this writer’s knowledge, brought about much of the current interest in fantasy wargaming. For a time the group grew and prospered, and Dave Arneson decided to begin a medieval fantasy campaign game for his active Twin Cities club. From the map of the “land” of the “Great Kingdom” and environs — the territory of the C & C Society — Dave located a nice bog wherein to nest the weird enclave of “Blackmoor”, a spot between the “Great Kingdom” and the fearsome “Egg of Coot”. From the CHAINMAIL fantasy rules he drew ideas for a far more complex and exciting game, and thus began a campaign which still thrives as of this writing! In due course the news reached my ears, and the result is what you have in your hands at this moment. While the C & C Society is no longer, its spirit lives on, and we believe that all wargamers who are interested in the medieval period, not just fantasy buffs, will enjoy playing DUNGEONS and DRAGONS. Its possibilities go far beyond any previous offerings anywhere!

So began Gary Gygax’s foreword (charmingly misspelled as “forward”) to the original edition of Dungeons & Dragons. That foreword is dated November 1, 1973, but it would still be a couple of months before D&D was “formally” released. I put the adverb in scare quotes, because, at the time, Tactical Studies Rules was a tiny shoestring operation, consisting of only three people: Gary Gygax (editor), Don Kaye (president), and Brian Blume (vice-president). It was more like a game club than a business; it was certainly a much more modest venture than what it would later become.

Initially, the three-book boxed set was sold through the mail, the first advertisements for which appeared sometime in the Spring of 1974. Of course, copies of D&D had undoubtedly been released “into the wild” of the miniatures wargaming scene before that. Just how soon before that is anyone’s guess, which makes determining a precise “birthday” for the world’s first published fantasy roleplaying game hard to establish. Nevertheless, gaming historian Jon Peterson, who’s done more research on this and related topics than anyone, advocates January 26, 1974 as a likely candidate. Barring further evidence to the contrary, it’s as good a day as any other, meaning that D&D celebrated the Big 4-0 just two days before I penned this entry.

As I never tire of telling anyone who will listen, I didn’t encounter D&D in any form until late 1979, by which point the game was nearly six years old. When I did, it was in the form of the J. Eric Holmes-edited Basic Set (the first of its kind) rather than the “White Box” that launched the game years previously. I knew of the existence of the White Box through the pages of TSR catalogs (where it received the moniker “Original Collector’s Edition”) and from the talk of the older wargamers I knew from local hobby shops, but I never saw a copy myself, let alone played it, for many years. Sometime when I was in high school, my father came across a hobby shop that was clearing out its old stock. Among the items it wanted to get rid of was a copy of the Original Collector’s Edition, along with its four supplements: Greyhawk, Blackmoor, Eldritch Wizardry, and Gods, Demigods & Heroes. Knowing of my love of all things D&D, he asked me if I wanted him to pick them up and I jumped at the chance. 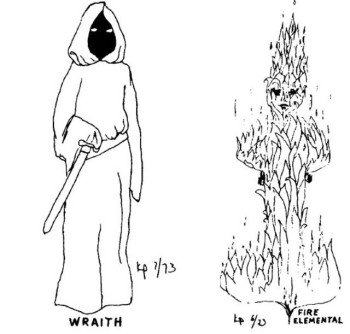 I wish I could say that it was love at first sight, but it wasn’t. Having cut my teeth on the glorious hardcover volumes of Advanced Dungeons & Dragons, it was difficult at that time to appreciate just how revolutionary the original game was. My teenaged eyes fixated on the amateurish – back then, I would have said “terrible” – art, poor layout, and non-existent organization. I found it simply mind-boggling that the game I loved and to which I’d devoted so much of my free time since I was 10 years-old had such humble origins. It was like finding an old high school yearbook photo of your favorite action hero and discovering that he had braces and Coke bottle glasses before Hollywood discovered him.

Fortunately, I held on to my copy of the White Box – I rarely get rid of anything. Years would pass before I looked at it again and Dungeons & Dragons itself would change in the meantime, going through not only several editions but also changes of publisher. As a younger person, Gary Gygax, TSR, and D&D were inextricably linked. I could not imagine a world in which any one of them could continue to exist without the others. Yet, that’s exactly what happened, as, first, Gygax left TSR and then TSR itself ceased to be. Dungeons & Dragons survived, having been purchased, along with most of TSR’s other properties, by Wizards of the Coast. Since that happened, Wizards of the Coast has published two more editions of the game and is gearing up to publish a third, perhaps later this year. They’ve also released a reprint of the White Box and its supplements that’s actually really well done, if a little pricey (though cheaper than trying to find used copies of the 1970s printings, which have become valuable collector’s items in recent years).

When I again took a look at my White Box back in 2007, I finally began to see why this game so struck a chord with wargamers forty years ago. For all its manifest flaws in terms of presentation and organization, it nevertheless drips with enthusiasm and inventiveness; it also evinces a very healthy attitude toward the limits of rules and the limitlessness of imagination. The game’s three volumes conclude with an afterward [sic] that contain some of the best advice ever included in any roleplaying game:

There are unquestionably areas which have been glossed over. While we deeply regret the necessity, space requires that we put in the essentials only, and the trimming will oftimes have to be added by the referee and his players. We have attempted to furnish an ample framework, and building should be both easy and fun. In this light, we urge you to refrain from writing for rule interpretations or the like unless you are absolutely at a loss, for everything herein is fantastic, and the best way is to decide how you would like it to be, and then make it just that way! On the other hand, we are not loath to answer your questions, but why have us do any more of your imagining for you?” 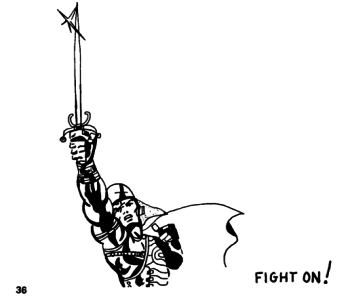 Personally, I’m a few years away from celebrating my own personal 40th anniversary with D&D–but not too many years.

Nice to read your prose again. I’ve really missed your posts on Grognardia. You’re a natural blogger, and the OSR has been impoverished by your absence. I hope things are well with you and that you are enjoying life.

I’ll second that, about missing James and his posts over at Grognardia. Glad to see him active once again. And thanks for bringing back some memories.

[…] As I’ve mentioned a couple of times before, I entered the tabletop roleplaying world in late 1979 at the ripe old age of 10. By that point, Dungeons & Dragons–and, by extension, the hobby it spawned–were already five years old. Consequently, I can’t be numbered amongst the earliest adopters of this new form of entertainment. Even by that date, there was a lot of water under the bridge of which I was very much unaware. Moreover, unlike many of my elders in the hobby, I wasn’t a wargamer (either miniatures or hex-and-chit) and I wasn’t all that well read in the fantasy literature that inspired D&D. I was most definitely a Johnny-come-lately, loath though I would have been to admit it. In fact, it rankled me a bit. I didn’t want to be one of “the kids,” as my friends and I were often called by the teenagers and college students who frequented the hobby shops. Besides, I reasoned, how could I be a kid when my beloved Holmes boxed set proclaimed that D&D was “the original adult fantasy role-playing game?” […]

[…] OD&D), which is to say the edition that existed between 1974 and 1976. This is the edition that celebrated its 40th anniversary earlier this year. What appealed to me and others about OD&D was that it was the ur-text of the hobby – simple […]