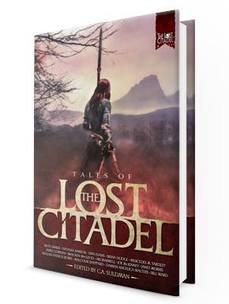 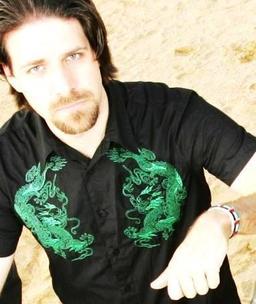 The Kickstarter Campaign for Tales of the Lost Citadel, a trans-media anthology with C.A. Suleiman at the helm, has gone live!

So, first off, go become a backer for said campaign. And then you can come back here and watch Colin (which is what the “C” stands for) talk about it in the video interview below. Or if you want to know more about said anthology and the video on the campaign page only whets your appetite, then watch the interview below for more information (and then go back the campaign!)

C.A. Suleiman has written novels and game content for over a decade and has worked for franchises like White Wolf and Dungeons and Dragons. Nowadays, when he isn’t working on The Lost Citadel or with Mark Rein-Hagen on I Am Zombie, he makes music with his band, Toll Carom, and posts random pictures of large cats on Facebook. He sat down with me this weekend for the following interview.

The interview below is approximately 45 minutes long. Links to specific topics are below.

To provide a broad overview though: we begin by discussing the setting and milieu of Tales of the Lost Citadel and what is in store for Kickstarter backers of this trans-media anthology. We then talk about Colin’s career and he reveals enticing details about his current work on I Am Zombie. Then we finish off with his advice for people who want to build a career in RPG gaming and trans-media.

We begin with Colin introducing himself and outlining his career in gaming and IP development to date, including his stints at White Wolf and Dungeons and Dragons.

1:16 Colin introduces the world of The Lost Citadel and its Kickstarter campaign, which was 3 years in the making. This is a shared world anthology set in a traditional western fantasy setting that has gone through an undead apocalypse.

3:00 He explains the scope of this first anthology, Tales of the Lost Citadel, which will introduce people to the world of The Lost Citadel.

4:52 A discussion of the trans-media aspect of the anthology, and the art and music that backers can unlock if enough money is pledged.

5:21 The work done on this anthology as of the beginning of the Kickstarter, and a link to some teasers on Facebook.

6:00 Colin describes the expansive potential future for The Lost Citadel shared world, including more anthologies, role playing games and so on. A comparison to Thieves World.

8:12 The mechanics of the shared world, and the power the writers have to shape the milieu

8:47 A list of the rewards available to backers of the Kickstarter campaign, including art, a soundtrack, and a copy of the writer’s bible that would be exclusive to writers and backers.

14:00 Going beyond the elevator pitch, a glimpse into the hard work that’s already been put into this project.

14:29 How he got started writing game content and novels.

15:39 He discusses his time at White Wolf and his first big break in the field.

17:26 Becoming the “undead guy,” and his work with Dungeons and Dragons, then The Mummy (which he was the chair for).

18:32 Colin explains how the work in this field mixes mediums and formats, so a writer must be very versatile.

19:36 His work with Dave Arneson, the creator of the role playing game and co-creator of D&D.

20:25 Colin’s work on Mummy: The Curse and his resulting award nominations

I Am Zombie, developed by Mark Rein-Hagen

20:55 The genesis of Make Believe Games and Colin’s position as the Creative Director.

21:35 An introduction to the world and concept of I Am Zombie, a fresh take on zombies

26:55 Colin explains his role as Creative Director of a company staffed by telecommuters all around the world.

29:02 How Make Believe Games, and game companies in general, are structured, how many games they tend to develop and how many concepts the tend to focus on.

31:00 Colin discusses heading up two major projects at once, and working in the quickly evolving field of trans-media.

31:29 The philosophy of trans-media and what it encompasses.

33:28 Colin discusses the axiom system of I Am Zombie and gives us a peek at some of the very cool materials that are already out.

How to Get a Career in RPG design and IP Development

38:18 How to tell whether a job offer is worthwhile.

39:18 How to ensure you get good and interesting work to do.

40:08 How to pick winning projects/companies to work for.

43:01 Payment, how to set appropriate expectations without being taken advantage of.

46:23 Where to get started finding a mentor or job in the field.

Emily Mah is a writer and the owner of E.M. Tippetts Book Designs, a company that provides formatting, cover design, and editing services for independent authors and publishers. Her last interview for Black Gate was with Raya Golden.