Gen Con has threatened to move out of Indiana if Republican Governor Mike Pence signs a controversial anti-gay law into effect.

Gen Con, the largest gaming convention in North America, began in Gary Gygax’s home in Lake Geneva, Wisconsin, in 1967; from 1985 to 2002 it was held in Milwaukee, and in 2003 it moved to its current home in Indianapolis, Indiana. Attendance last year was more than 56,000, making it the largest convention of any kind in the state.

In his letter to Indiana Gov. Mike Pence this week, Adrian Swartout, owner and CEO of Gen Con, wrote:

Gen Con proudly welcomes a diverse attendee base, made up of different ethnicities, cultures, beliefs, sexual orientations, gender identities, abilities, and socio-economic backgrounds. Legislation that could allow for refusal of service or discrimination against our attendees will have a direct negative impact on the state’s economy, and will factor into our decision-making on hosting the convention in the state of Indiana in future years.

Supporters of the bill say it protects business owners with strong religious convictions from heavy-handed government interference, while opponents argue that it permits open discrimination against lesbian, gay, bisexual and transgender individuals.

In the past week many have publicly spoken out against the bill, including George Takei, who posted the following to Facebook on Tuesday. 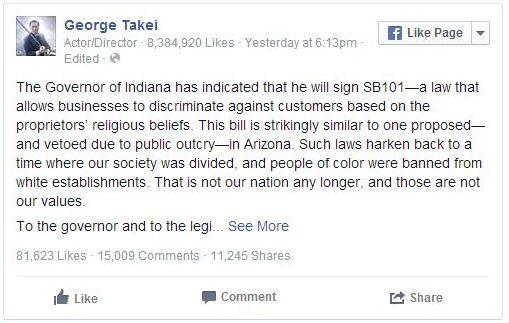 Read more at The Huffington Post and The Indianapolis Star..

Speaking as a regular Black Gate contributor and as a resident of Indiana, I’m horrified to discover that once again my state is vying for the crown of Least Enlightened and Most Inhibited State Of the Union.

If one of the ongoing values (“lessons”) of speculative fiction is tolerance, as I believe it is, then the only solution is for Governor Pence and his many legislators to read something recommended in theses pages. Almost anything would do.

I hope Gencon stays, though I have never attended, but I also hope that if this venal, backward legislation passes, that they make a very public stink as they high-tail it to a state more committed to the bounds of decency, love, and the 21st century.

What does the unless clause mean?

I read that to mean that if a state government entity required to enforce a law (say, a curfew) comes into conflict with an organization’s religious beliefs (say, a midnight church service), then the state is prohibited from interfering, unless it can prove it’s using the “least restrictive means possible” to enforce the curfew (say, allowing traffic to and from the service only).

I think the “unless” clause is there just to make sure that the government has SOME ability to regulate religion.

For an extreme example (but sadly a real one), if someone’s religion involved human sacrifice or violent holy war, the government has a well-established compelling governmental interest in making sure people aren’t murdered, and the “least restrictive means” of obtaining that government interest is by burdening one’s religious freedom to exercise these activities. Anything less restrictive than that violates the compelling government interest, by allowing religiously-motivated violence and murder. If the “unless” phrase were not in there, someone could use this law to try to argue that the government has no right to inhibit these sorts of activities. With the phrase, they have to argue that the government has some other way of doing this without stopping their activities.

Not that I expect it to matter, but when I couldn’t get through to Gov. Pence’s office because the phone lines were busy, I offered this concise opinion on Twitter:

@GovPenceIN I am IN native/resident/voter, churchgoer, married, father, and I wear kilt to @GenCon every year. Hope I get fed. Veto this.

Of course he did. I’m an Indiana resident, although I’m starting to think I need to not broadcast that very loudly because this idiotic legislation reflects very poorly on us.

GenCon is the one industry convention I attend that’s in easy driving distance. I already despise this idiotic legislation. If it’s responsible for driving GenCon away from Indy I’m going to be even more ticked off. Why is it that these people feel like the dominant religion in America is so persecuted? They have no sense of irony. All they can see is there own sense of entitlement and victimhood.

I’m disappointed Pence signed the bill into law, although it seemed pretty clear that was going to happen. But I’m heartened by the public outcry and the awareness this has generated.

Having said that, I hope Gen Con doesn’t move. I think they accomplished what they set out to do, raising awareness of discrimination against lesbian, gay, bisexual and transgender individuals.

Another Hoosier over here.

So now that it’s passed (and we all know what it’s like to change laws once they’ve passed), I would offer this advice: if you notice businesses that discriminate, use social media, etc. to call out what specifically happened. People can still vote with their dollars, regardless of what laws are out there. I’ve taken that stance with businesses in the past (in one case, I didn’t like how someone’s advertisements degraded women).

> if you notice businesses that discriminate, use social media, etc. to call out what specifically happened.
> People can still vote with their dollars, regardless of what laws are out there.

I disagree.. SIGN THE BILL SIGN THE BILL SIGN THE BLOODY THING ALREADY SO that GenCon has a reason to get the H out of dodge and back to the real world like, I donno, CHICAGO or some such place. CERTAINLY the Rosemont Convention Center is big enough now.. COME BACK TO US GENCON.. get outta Indiana they are all HOSERS!!

I found the following quote online concerning this Indiana law that’s encouraging. If this professor is right, hopefully this law cannot be used in the way we fear:

[T]he act is a moderate measure that tracks a well-established federal law and the laws of several dozen other states. Contrary to what some critics have suggested, it does not give anyone a “license to discriminate,” it would not undermine our important civil-rights commitments, and it would not impose excessive burdens on Indiana’s courts. . . .

The act’s standard is applied in many jurisdictions across the land and it has long enjoyed support from across the political spectrum. This standard is not new; we have plenty of evidence about how it works. We know that courts have not applied it to require excessive accommodations or exemptions from anti-discrimination laws and civil-rights protections. Fighting invidious public discrimination is, American courts agree, a public interest of the highest order. Contrary to the concern quoted in the recent Tribune piece, a business owner or medical professional who invoked the act as a “license” to engage in such discrimination would and should lose. The act creates a balancing test, not a blank check. . . .

One of the claims the bill’s supporters have made is that 19 other states have “similar” statutes, and that a federal statute from 1993 set the precedent. After doing a fair amount of reading over the past few days, I settled on this link from an Indy-based lawyer as the most cogent analysis of why these statements are disingenuous and effectively false.

It’s worth nothing that Notre Dame University, and its objections to the contraception provisions in “Obamacare,” is part of the reason the RFRA legislation got started in the first place. Professor Garnett, quoted above, is not likely an unbiased source given his direct affiliation with Notre Dame.

Anyway. I may be biased, too, but for those so inclined, I believe this link is helpful:

James, Mark — thanks for doing the homework on this. I’ve been getting a lot of questions about this bill (now law), and this is very helpful.

What most people seem to not realize is that these kinds of laws are often an attempt at conditional surrender. They’re basically people who are opposed to gay marriage saying, “Fine, you can have gay marriage, just leave us out of it.” Never mind that these laws have never successfully been used to avoid being involved in a gay marriage, that’s what a lot of people who support the laws are attempting to do. What this kind of response says to these people is, basically, “You better keep gay marriage illegal or you will be forced to participate in it, no matter what your religious beliefs about it.”

Marriage is fundamentally religious to many Christians. Some churches consider it a sacrament, while those who do not still see it as ordained and defined by God, all the way back in Genesis. Now not all Christians believe gay marriage is wrong, and many who do don’t see taking part in it in a minor role, such as a caterer, as a problem, but there are those for whom taking part in a religious ceremony in deliberate disobedience to God’s commands is not just wrong or sinful, it’s blasphemous. Christians have become martyrs over less.

> What most people seem to not realize is that these kinds of laws are often an attempt at conditional surrender.

That’s a very interesting take. I hadn’t considered that before. I’m a Catholic, and we had to shop around quite a bit to find a parish that wasn’t actively hostile to gay and lesbian members… and I know that Catholics are often considered pretty liberal on this issue by evangelical Christians.

I saw that Pence had signed a hastily-written “fix” to the law this week to address some of these issues. I’m naturally suspicious of any amendment that’s thrown together so quickly to address a public outcry, but it does seem to be a step in the right direction.