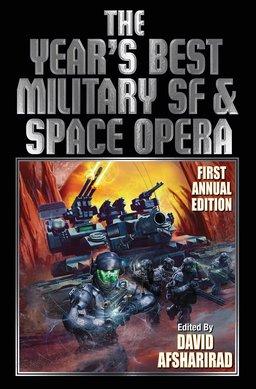 I count no less than nine Best New SF, Fantasy and Horror volumes on the market today. We’ve already covered four of the more interesting titles coming later this year:

and I’ll be reporting on some of the others in the coming weeks.

Still, I was intrigued to see Baen is launching a brand new volume with a very specific focus early this summer. The Year’s Best Military SF and Space Opera will be edited by David Afsharirad, and promises to be the first of its kind — a Best of the Year volume exclusively devoted to military and adventure SF tales. I enjoy adventure SF, and I especially enjoy Space Opera with pulp sensibilities. And that seems to be exactly what this volume has in mind, going by the blurb.

With an introduction by best-selling military science fiction author David Drake and selected by editor David Afsharirad from the top short story markets in the field, here are the most thrilling, pulse-pounding, and thought-provoking stories of the past year. Stories of future military men and women, space opera on a grand scale, and edge-of-your-seat adventure tales in the pulp tradition, from giants of the genre to brilliant up-and-comers.

I’m not familiar with editor David Afsharirad. This is his first book, and his only previous credit seems to be a single short story in Hildy Silverman’s Space and Time magazine back in 2011. Still, I’m willing to give him a shot.

I read David D. Levine’s contribution, “The End of the Silk Road,” when it appeared in the May/June 2014 issue of The Magazine of Fantasy & Science Fiction (which we discussed here). On his blog, David talks about the story, and another interesting aspect of the book — one story from the The Year’s Best Military SF and Space Opera will be chosen (by reader vote) as the Year’s Best Military and Adventure Science Fiction Story, with an award to be presented at DragonCon in August 2015.

“The End of the Silk Road” is “Venus noir,” in the mold of C. L. Moore’s “Northwest Smith” stories, with froggy Venusians, a damaged protagonist, love, guns, and betrayal. It’s set in the same universe as my forthcoming novel Arabella of Mars, but where that book takes place on Mars in 1813, this story is set on Venus in 1936. It isn’t “military” in the least, so I assume the title of the anthology is to be read as Year’s Best (Military SF) and (Space Opera) rather than Year’s Best Military (SF and Space Opera).

The Year’s Best Military Science Fiction and Space Opera, the first in what Baen hopes will be an annual series, will be published as an ebook on May 16, 2015 and in paperback on June 2, 2015. It already has a cover and preorder pages at Amazon and Powell’s.

Baen will also be using the book as a ballot for a new readers’ choice award, to be presented at DragonCon. Voting will be done via online poll. More details as I have them!

The Year’s Best Military SF and Space Opera will be published by Baen Books on June 2, 2015. It is 576 pages, priced at $16 in trade paperback and $8.99 in digital format. Get more details, and read the Preface by David Afsharirad, David Drake’s intro, and excerpts from several of the stories at Baen’s website.

See all of our updates on upcoming books here.