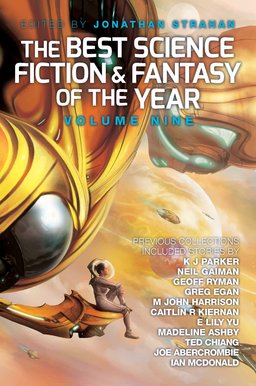 Jonathan Strahan’s The Best Science Fiction and Fantasy of the Year has been at new publisher Solaris for two years now, and things seem to be tickety boo. Which is great, since I really look forward to this volume every year, and I don’t need any additional stress and uncertainty in my life. I get enough of that worrying about whether Community is going to get canceled again.

Strahan has crammed 28 stories into his latest anthology, which may be a record, I dunno. How am I gonna find time to read them all? Man, I desperately need a day planner. And a couple of personal assistants who don’t complain when I send them for coffee.

We’ve covered a lot of Jonathan Strahan’s projects recently — seriously, this is one busy guy. Here’s a few highlights:

The Best Science Fiction and Fantasy of the Year, Volume Nine will be published by Solaris Books on May 12, 2015. It is 624 pages, priced at $19.99 in trade paperback. No word yet on a digital edition, but I expect there will be.