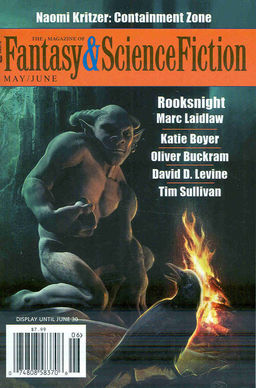 I’m so proud of myself. I had the latest issue of F&SF with me for my flight to New Orleans this week — which means I actually read it before it was time to tell you about it, for once. There I was, reading tales about mermaids and private eyes on Venus at 30,000 feet, while the guy on my left was playing solitaire and the woman on my right occupied herself with an article on Scarlett Johansson in Vanity Fair. Losers. Although admittedly, I kept getting distracted by glamor shots of Scarlett Johansson and tried to steal her copy of Vanity Fair when she started to nod off.

Anyway, I enjoyed this issue. It opens with David D. Levine’s pulp SF-hard boiled detective homage “The End of the Silk Road,” in which our hero, Mike Drayton (a man whose first thought is “Nice gams” when a woman collides with him in zero-g), takes a commercial prop-plane to Venus, land of foot-powered taxis and Venusian spider-silk factories, where he’s been hired to investigate a drug ring run by a froggie, a frog-like native. Of course, things aren’t what they appear to be and pretty soon the thick air of Venus is filled with the sound of gunshots, curses, and a lot of tough talk.

I was more impressed with Alyssa Wong’s first published story, “The Fisher Queen.” I was going to tell you all about it, but I made the mistake of checking Tangent Online first and discovered that the reviewers there (as usual) noticed a lot more than I did — including obvious allusions to William Faulkner and Angela Carter. So I’ll shut up and let Martha Burns & C. D. Lewis tell you about it.

“The Fisher Queen” by Alyssa Wong is stunning and smart. The first line, “My mother was a fish,” echoes a line in Faulkner’s As I Lay Dying. In Faulkner’s novel, a young boy’s lament that his dead mother is a fish functions as a metaphor for the boy’s grief together with a less obvious comment on the way women are caricatured and discarded. In Wong’s story, fifteen-year-old Lily’s mother truly is a fish or, rather, a mermaid. Her father jokes about this with his three daughters. In the early parts of the tale, this seems like a sweet way a beloved father helps his girls cope with their mother abandoning them, but when Dad’s fishing crew catches a different kind of mermaid on a deep sea expedition, Lily finds out the gut-wrenching truth. Like Faulkner’s novel, this is a meditation on the effects of motherlessness and brutality against women. It is also a deeply satisfying revenge story. Angela Carter is the acknowledged mother of retold fairy tales where the heroines are no Disney princesses. Now she has a daughter in Alyssa Wong.

Departments this issue include book reviews by Charles de Lint and James Sallis, film reviews from David J. Skal, Paul Di Filippo’s Plumage From Pegasus column, cartoons by Arthur Masear and Mark Heath, Coming Attractions, and a Curiosities entry by Bud Webster. The cover is by Cory and Katska Ench for “Rooksnight.”