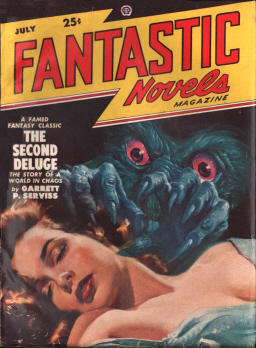 Yesterday, I talked about finding a copy of the hardcover edition of Damon Knight’s Science Fiction of the 30’s on a sale table at Windy City Pulp and Paper for just $3.33. Items on the table were priced at 3 for $10, so before I could buy it, I had to find two additional items I could live with.

Didn’t turn out to be that hard. Right next to Knight’s dusty hardcover was a copy of the July 1948 Fantastic Novels magazine, with the gorgeous Lawrence cover at left. Admit it, that cover alone is worth $3.33. I snapped it up and didn’t even look inside.

I didn’t figure there was all that much to know about the contents, anyway. Fantastic Novels was famous for including a complete novel with each issue, which usually didn’t leave much room for filler. In addition to the cover story — Garrett P. Serviss’s 1911 novel The Second Deluge — this issue had only one additional story: Frank Lillie Pollock’s “Finis,” reprinted from the June 1906 issue of The Argosy magazine.

I imagine it had to be pretty cheap to produce a magazine containing only two reprints (assuming the editors paid anything for them at all). So what did the publishers of Fantastic Novels spend their money on? Beautiful art, that’s what. In addition to the cover by Lawrence, this issue had several full pages of art by Lawrence and the great Virgil Finlay. Click on the image at left to see the full-sized version. I have no idea what The Second Deluge is all about, but I want to frame this magazine and put it on my wall.

Alas, there were no other copies of Fantastic Novels to be found on the table — and no other hardcovers of interest. For my third item, I settled on an issue of The Original Science Fiction Stories from January 1956 that looked like it had just come off the printing press. It also has fiction by Randall Garrett and James Blish, so maybe it will turn out to be worth $3.33 too.  Either way, it’s fine by me; I got my ten bucks’ worth — and more — with the first two items.