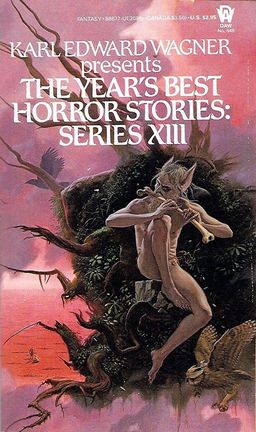 I’m still working my way through the fabulous collection of pulps, digest magazines, and paperbacks I brought back from the Windy City Pulp & Paperback show in April.

I found the artifact at left mixed in with a delightful assortment of 80s horror paperbacks near the back of the Dealer’s Room. It’s the 13th volume of The Year’s Best Horror Stories, which Karl Edward Wagner took over from editor Gerald W. Page in 1980 with the eighth volume.

The Year’s Best Horror was a long-running paperback horror anthology published by DAW. Like Donald Wollheim’s World’s Best SF and Lin Carter and Arthur Saha’s Year’s Best Fantasy, both also from DAW, it was a staple on bookstore shelves through the late 70s and early 80s, and served as a terrific introduction to a wide range of new and established writers every year.

For young readers new to science fiction, fantasy, and horror, DAW’s annual Best collections were a terrific way to explore the field. They were ubiquitous, extremely well edited, and — best of all — marvelously inexpensive.

Wagner edited fifteen installments in the series, until he drank himself to death in 1994. The last one was volume XXII, and the series died with him.

If you want to collect DAW’s World’s Best SF and Year’s Best Fantasy, you’re on your own, relegated to tracking down tattered paperbacks in the collector’s market — and paying a pretty penny when you found them. Karl Edward Wagner Year’s Best Horror volumes, however, established an early and enviable reputation as a treasure trove of high-quality horror… so much so that Underwood Miller made the unprecedented decision in the early 90s to collect them  in hardcover omnibus editions, three per volume, under the title Horrorstory — and what gorgeously packed volumes they were.

Only three volumes of Horrorstory appeared before Wagner died (volumes three, four, and five… and if you’re looking for ones and two, don’t waste your time; they don’t exist. Why? I have no idea.)  Like The Year’s Best Horror, Horrorstory died with Wagner.

The Horrorstory volumes are a splendid way to get these hard-to-find paperbacks in a permanent edition. They don’t make collecting them any easier, however… all three volumes are now highly prized themselves, and extremely expensive. Figures.

Michael Whelan painted the covers to most of the The Year’s Best Horror volumes, including both covers that accompany this article, and in my opinion he did some of his best work for this series.

I’m embarrassed to admit that, while I was a loyal collector of both Terry Carr and Donald Wollheim’s Year’s Best SF — and Gardner Dozois when he finally came on the scene, taking over the Best Science Fiction Stories of the Year series from Lester del Rey 1977 — I didn’t read Year’s Best Horror when it was originally released. I’m paying for it now, trying hard to track down the original volumes when I can find them. So I was delighted to stumble on this volume, I can tell you.

Thirteen is a lucky number for Series XIII, for some of the best horror tales of the last thirteen years were published in time to make this volume. As Karl Edward Wagner says, “I sifted through the find stories that hold the power to chill reader’s imagination — whether through icy terror or with a disquieting shiver, Here are the eighteen stories from 1984 that best succeed in evoking a mood of horror.”

Here is Stephen King, of Pet Semetary fame, with one of his scariest, “Mrs. Todd’s Shortcut.”

Here is Ramsey Campbell, of Incarnate, with “Watch the Birdie,” a shocker.

This is the Thirteenth!

Introduction: 13 Is a Lucky Number, by Karl Edward Wagner
“Mrs. Todd’s Shortcut,” by Stephen King (Redbook, May 1984)
“Are You Afraid of the Dark?” by Charles L. Grant (Fantasycon IX Programme Booklet, 1984)
“Catch Your Death” by John Gordon (Catch Your Death and Other Stories, 1984)
“Dinner Party” by Gardner Dozois (Light Years and Dark, 1984)
“Tiger in the Snow” by Daniel Wynn Barber (The Horror Show, Fall 1984)
“Watch the Birdie” by Ramsey Campbell (Watch the Birdie, 1984)
“Coming Soon to a Theatre Near You” by David J. Schow (The Twilight Zone magazine, March/April 1984)
“Hands with Long Fingers” by Leslie Halliwell (The Ghost of Sherlock Holmes: Seventeen Supernatural Stories, 1984)
“Weird Tales” by Fred Chappell (The Texas Review, Spring/Summer 1984)
“The Wardrobe” by Jovan Panich (Potboiler Magazine #7, 1984)
“Angst for the Memories” by Vincent McHardy (Damnations, 1984)
“The Thing in the Bedroom” by David Langford (Knave (UK), 1984)
“Borderland” by John Brizzolara (The Twilight Zone magazine, November/December 1984)
“The Scarecrow” by Roger Johnson (Ghosts & Scholars #6, 1984)
“The End of the World” by James B. Hemesath (WIND/Literary Journal, Vol 14, #51, 1984)
“Never Grow Up” by John Gordon (Catch Your Death and Other Ghost Stories, 1984)
“Deadlights” by Charles Wagner (Borderland #3, 1984)
“Talking in the Dark” by Dennis Etchison (Red Dreams, Oct 1984)

The Year’s Best Horror Stories: Series XIII was published by DAW Books in October 1985. It is 251 pages, priced at $2.95 in paperback. The cover is by Michael Whelan. It is out of print and there is no digital edition. I bought my copy for $5.

I have a bunch of the DAW Year’s Best, both the horror and fantasy volumes, though hardly complete runs. The DAW collections I value most, though, are the Great SF year-by-year collections they put out in the 80’s. I bought the first dozen (1939-1950) as they came out. I’ve wanted to fill in the rest over the years, but holy cow, are they hard to find – and expensive! I’ve only managed to pick up one. It just confirms what I always say – buy it all. Buy it now.

Absolutely! I’ve tried to track these down, and they are VERY hard to locate at any kind of reasonable price. I have about 2/3rds of them and, like you. wish I’d bought more when they first came out. I think the later ones are the really expensive ones.

This was a fantastic series, and one that rates a series of articles all on its own.

Sure wish KEW had stuck around longer.

Yeah. The stories you hear at conventions of his death aren’t pretty. I just wish he’d been able to get some help, before the end.