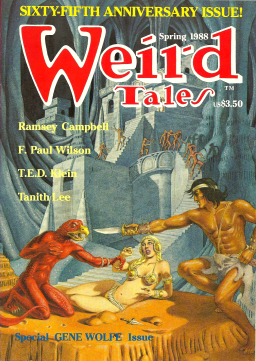 I’m still unpacking all the treasures I brought home from the 2014 Windy City Pulp & Paper show in April. Although, as my wife Alice points out, things would go a little faster if I didn’t fondle everything for 20 minutes.

I found the artifact at right buried in a box of magazines and fanzines from the 70s and 80s I acquired at the show. It’s the 290th issue of Weird Tales, covered dated Spring 1988 — the Sixty-Fifth Anniversary issue, a landmark, and one of my favorite issues of perhaps the most famous fantasy magazine of all time.

Issue 290 was the first issue of Weird Tales from Terminus Publishing, under editors George H. Scithers, John Gregory Betancourt, and Darrell Schweitzer. It’s special to me because the Terminus era was my favorite incarnation of Weird Tales.

I suppose some folks will find that odd. Certainly the early pulp era of the Grand Old Lady of fantasy was its most fertile and famous period — the late 20s to mid-thirties, when it routinely published groundbreaking work by Robert E, Howard, H.P. Lovecraft, Clark Ashton Smith, Edmond Hamilton, and many, many others. Those issue are highly prized by collectors and key copies in good condition from that era routinely command hundreds of dollars.

But the Terminus years, which began in my mid-20s, marked the resurgence of Weird Tales as a vibrant, important and thoroughly modern fantasy magazine, publishing short fiction by the top fantasy writers of the time. It was also the first time I was able to enjoy it as a contemporary publication, rather than a highly collectible relic of a distant era, and I appreciated that very much. I had a subscription, and looked forward to each issue eagerly.

Weird Tales had been absent from magazine racks for several years by the time the first Terminus issue arrived. Issue 290 was the first since the aborted Bellerophon era, under publisher Brian Forbes, who produced two poorly distributed issues in 1984 and 1985 — both of which are quite rare today.

Although the Bellerophon issues had excellent production values and an impressive list of contributors, they were doomed by poor distribution. Just like the pulp issues, they are highly sought by collectors, for their scarceness as much as anything else — I’ve never even seen a copy of the Winter 1985 issue.

If you come across either of them in the back a dimly-lit bookstore some day, snatch them up (and if you find the one on the right, e-mail me immediately).

Scithers, Betancourt, and Schweitzer were far more successful than Forbes, keeping Weird Tales on a (more-or-less) quarterly schedule for roughly a decade, until the magazine became part of Warren Lapine’s DNA Publications stable around the turn of the millennium.

And what a fabulous decade it was!  Scithers, Betancourt, and Schweitzer instituted several changes that gave the magazine a distinct look and character, and you can see most of them in issue #290.

First, the magazine was huge — 146 pages, in oversize pulp format — and perfect bound, making it look more like a book than a magazine. I remember being tremendously impressed when I first held a copy in my hands. And in fact, when I finally launched a magazine of my own over a decade later, I consciously imitated it, producing Black Gate in perfect-bound, 7″ x 10″ pulp format.

The editors showcased a different writer each issue. In #290, it’s Gene Wolfe, who’s represented with no less than six complete stories, and a profile by David Hartwell.

But by far the best feature of the reincarnated version of Weird Tales was the lush, full-page artwork. In this issue, the cover and the interior art are all provided by the talented George Barr, who seems to be channeling Virgil Finlay. Here’s his double-page spread for Gene Wolfe’s “The Other Dead Man.”

The editors worked very , very hard to make the experience of flipping through issue 290 as close as possible to stumbling on a new issue of the pulp incarnation, and they succeeded to a marvelous degree. The design — including the masthead, spot art, and even the “Comments from the Eyrie” (WT’s famous letter column) — mimicked the original extremely well. Perhaps an old-time reader of the original pulp issues could spot a few imperfections, but for me the experience was nearly flawless.

Here’s a few more art samples, just because once I got my wife’s scanner warmed up, it was hard to stop. Here’s Barr’s double-page spread for Darrell Schweitzer’s “The Mysteries of the Faceless King.” 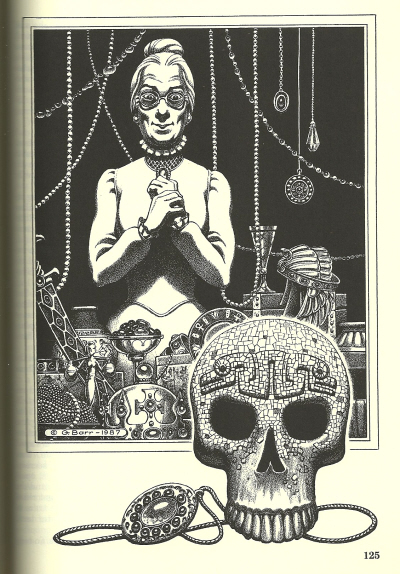 I have to say, the Terminus Weird Tales had some of the most effective interior art of any magazine I’d ever seen. The single-artist showcase in each issue of  was one of my favorite features of Weird Tales and it’s something I sometimes wish other magazines emulated.

I was expecting the back cover of issue 290 to have an ad, but instead it trumpeted the return of the magazine and the contents. 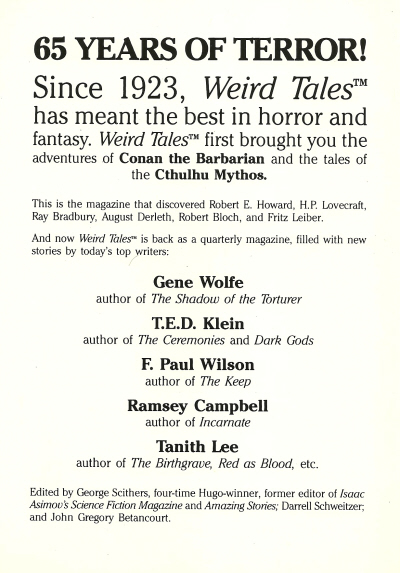 I have the first few years of the Terminus Weird Tales, and they are indeed beautifully done. I don’t know why i didn’t keep on with them – for some reason I was far more dilligent about keeping up with the Twilight Zone magazine in those days.

I’m surprised they aren’t more collectible. For a long, long time you could order many of them as back issues on the Terminus/DNA website. They did produce limited edition hardcovers of each issue, and sold those directly into the collector’s market, and perhaps that satisfied what desire these was among hardcore collectors.

In any event, these are beautiful issues with great contents, most of which are still inexpensive and readily available. Find them if you can – they’re worth your time.

I’ve never admitted it before now, but the Terminus era was my favorite for WT, as well. And not only because of the excellent art and great stories. George H. Scithers was such a gentleman. I never had contact with Betancourt or Schweitzer, but I had a number of mail correspondences with Mr. Scithers, all in a bid to sell a story to WT. George never did buy one of my stories, but he definitely helped me become a better writer, and he did it with such kindness. To this day I consider him perhaps my best literary coach. Still wish I’d sold WT a story, though. 🙂

I have a beautiful little paperback published by Wildside in 1997 – The Best of Weird Tales 1923. It was edited by Marvin Kaye and J.G. Betancourt. It was supposed to be the first of a series that would cover WT year by year, but there was never (to my knowledge) another volume. A real shame. It has a teriffic Fabian cover, too.

Another +1 for the Terminus years. Not just because of the fiction and the artwork — they also had some truly excellent interviews (e.g. the Wolfe interview in the issue at hand).

Yikes, what a classic issue. “Mysteries of the Faceless” king was the story that introduced me to Schweitzer’s vast catalog of terrific dark fantasies, but I never read it in the original issue, so it’s great to see how George Barr illustrated this one. I first read the tale when Marvin Kaye reprinted it a few short years later in WEIRD TALES: THE MAGAZINE THAT NEVER DIES. I immediately discovered Schweitzer’s “King Yvorian’s Wager” in the then-current issue of WT, and after those two stories I was hunting down every story and collection by DS that I could find. And I tried not to miss an issue of the Terminus run…thanks for this awesome tribute to that terrific era of weirdness and fantasy.

Correction: It was only a few short MONTHS until Kaye reprinted “Mysteries of the Faceless King” in the WEIRD TALES: THE MAGAZINE THAT NEVER DIES hardcover anthology. That anthology, more than any other, turned me into a WT devotee. There were mind-bending stories by Tanith Lee (“The Sombrus Tower”), Clark Ashton Smith “The Weird of Avoosl Wuthoqquan”, Schweitzer’s aforementioned tale, Lovecraft’s rarity “He”, and Robert E. Howard (“Skulls in the Stars”). The great news is that Kaye’s first retrospective is still crazily affordable: http://www.amazon.com/Weird-Tales-Magazine-That-Never/dp/B000H572RM/ref=sr_1_1?ie=UTF8&qid=1402355166&sr=8-1&keywords=marvin+kaye+weird+tales+never+dies

> George H. Scithers was such a gentleman. I never had contact with Betancourt or Schweitzer, but I
> had a number of mail correspondences with Mr. Scithers, all in a bid to sell a story to WT.

Believe it or not, I sent a series of stories to George Scithers when I was in high school, and he was editor of Asimov’s (starting when I was 12 years old). His personal replies were always delightfully encouraging. Glad – but not surprised! – to hear you had a similar experience.

And the submission guidelines he included with each rejection letter were a work of art!

> I have a beautiful little paperback published by Wildside in 1997 – The Best of Weird Tales 1923.

I bought that! Picked it up about a dozen years ago, if I remember correctly.

And yeah… it was a real shame there weren’t more of them. I really looked forward to the later volumes. But alas, they were not to be.

> Another +1 for the Terminus years. Not just because of the fiction and the artwork — they also had some truly excellent interviews

You know, I don’t recall the interviews. I should dig up my old copies and look through them to see what I can find.

> after those two stories I was hunting down every story and collection by DS that I could find.

I really enjoyed Darrell’s entertaining and superbly well-informed editorials in the magazine, too (at least, after a while I assumed it was him writing them… they always read like his style!)

> And I tried not to miss an issue of the Terminus run…thanks for this awesome tribute to that terrific era of weirdness and fantasy.

You’re most welcome! I’m tempted to dig up a few more and scan some of the interior art, just to see how it compares.

> And the submission guidelines he included with each rejection letter were a work of art!

I’d forgotten about those! I think they were some of the most detailed, but also helpful and interesting subbing guidelines I received from the period. Geez, I might even have some of them somewhere. Now I’ve got to go digging.

[…] reprinting WT fiction, from the death of the pulp magazine in September 1954 through its rebirth in 1988, generously illustrated with nearly three dozen high-res scans. Here’s a quick […]