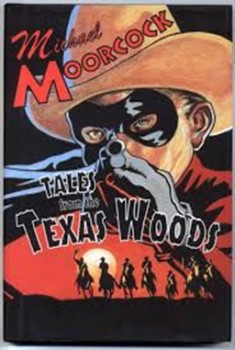 Well, not quite. That title was just to grab your attention. But Elric’s creator did set a tale at London’s most famous address, 221B Baker Street. And it’s a pretty ‘normal’ Holmes tale; which you might not expect from the guy who created Stormbringer.

I enjoyed Fletcher Vrendenburgh’s post last week on Michael Moorcock’s Eternal Champion. I devoured the tales of Corum, Hawkmoon, Erekose, and of course Elric in my middle-school years.

Being a Dungeons and Dragons player, these books were awesome. I think I even used Rackhir the Red Archer in a game. If you’ve not read  significant parts of that saga, your fantasy education is lacking.

Moorcock’s work encompasses much more than just the Eternal Champion tales. I’m a Christian and I was fascinated by the premise of The War Hound and all the World’s Pain (an excellent read: the sequel, not so much).

I even wrote a paper on the idea for a high school religion class. That got me an invite to see the teacher, a priest, after class.

Back in 1995, Moorcock wrote “The Adventure of the Dorset Street Lodger” as a privately printed chapbook which he let friends of his, who were opening a hotel on Dorset Street, give away to their first guests.

His name wasn’t even included on it, so some of them probably had no idea what they really had. Moorcock reprinted it in 2001 in a collection of his stories, renaming it, “The Further Adventures of Sherlock Holmes I: The Adventure of the Texan’s Honour.” It has since been included in a couple other readily available anthologies.

During a hot London September, Watson and Holmes had planned on being away from Baker Street. Accordingly, Mrs. Hudson had hired a firm to come and “refurbish and decorate” their lodgings.

But her lodgers unexpectedly stay home (there’s a reason she’s referred to as their ‘long-suffering landlady,’) and for various reasons, alternative accommodations are few. So they decide to ask Mrs. Hudson to recommend a neighbor who rents rooms.

She sends them over to 2 Dorset Street to stay with her sister-in-law. Of course, Holmes and Watson can’t look out a window without getting involved in a case!

And if we’re going to mention Moorcock, what about Fritz Lieber? The author of Fafhrd and the Grey Mouser (acknowledged by Gary Gygax as an influence on his creation of Dungeons and Dragons) wrote a rather unique pastiche, “The Moriarty Gambit.”

In it, he has Holmes telling Watson of the time that he defeated none other than his future nemesis, James Moriarty, in a match at a chess tournament. It’s a contained story that reads like a play and it doesn’t hurt if you know some chess.

Lieber was a self-professed fan of Solar Pons, August Derleth’s greatest of all Holmes imitators (visit SolarPons.com for more on the Sherlock Holmes of Praed Street). Another fantasy giant who was both a Holmes and Pons follower was Phillip Jose Farmer.

In 1974, Holmes and Tarzan met in Farmer’s The Adventure of the Peerless Peer. Farmer also wrote other Holmes-related stories.

Other fantasy authors, including females such as Barbara Hambly and Tanith Lee, have written of Holmes.

It’s been even more common for notable science fiction authors to visit where it’s always 1895 (that’s a reference to a famous Sherlockian poem by Vincent Starrett) and I’ll talk about them in a future post.

Also, many writers have pitted Holmes against the supernatural. Some guy named Stephen King even wrote (an odd) Holmes story. Ghost stories and the like is a subject for another day. A certain well-known vampire will be involved. And I don’t mean Edward (I’d like to see Holmes put a stake through his heart, though…).

I’d be remiss if I didn’t mention the most popular Holmes pastiche of the past few decades. Neil Gaiman’s short story, “A Study in Emerald,” is a masterful blending of the Holmes and Cthulhu worlds, with a fine twist.

Mash-ups abound. Besides the aforementioned Dracula, Holmes stories have included Harry Houdini, Dr. Fu Manchu, The War of the Worlds, Jack the Ripper, Oscar Wilde, Theodore Roosevelt, and many other famous names.

I started with Moorcock, so I’ll finish with him as well. A story I’ve thought about for over two decades involves Holmes being summoned by Arioch to aid Elric in rescuing the kidnapped Moonglum. Elric represents Chaos, Holmes Law, and the Warrior in Jet and Gold will join them on behalf of the Balance. Some day…

IT’S ELEMENTARY – At the time of “The Dorset Street Lodger,” Moorcock considered writing a six-story Holmes collection for publication. However, that didn’t come together and it remains the only Holmes tale he has ever written … and likely ever will write.

Thanks for the nod there Bob and yeah ‘war hound’ was great, really fun, intresting read, although it’s sequel was a bit of a flop (although I’ve heard a few different opinions on that one)

And the number of dips and niches and asides in moorcocks work is incredible, it makes him one of the most intresting writers to be a fan of.
Enjoyed the post! 🙂

I recall reading the sequel (something with ‘Crucible’ in the title) a few years after ‘War Hound’ and being just completely disappointed. It wasn’t similar at all.

I really struggled through The Skrayling Tree (not sure I finished it) and didn’t even try ‘The White Wolf’s Son. It all got too strange and non-Elric for me. But up to those, I’m 100% for the Eternal Champion saga.

I’m planning on a look at Glorianna: a book which I both admire and am not too crazy about. It’s a rather unique piece of work.

I’m glad you like the Eternal Champion post. I remember enjoying Warhound but haven’t read it in ages. The breadth of his catalogue is astounding.

Thanks for writing this and all the other Holmes articles. I’ve always been reluctant to try the Solar Pons stories but this one’s convinced me to give him a go.

Wasn’t ‘The City in the Stars’ the sequel ‘The Warhound and the World’s Pain’?

Maybe somebody can help clarify something for me in that regard. Tim Powers had written a book a few years previously ‘The Drawing of the Dark’, a book set in the middle-ages which revolved around a mysterious mittel-european tavern located underground and the celestial brew which was dispensed from it. ‘The City in the Stars’ covered very similar ground. I remember the innkeeper being Irish, and I remember being surprised that Moorcock had used the same idea, given that people were inevitably going to accuse him of nicking it from Powers.

Here’s the thing: recently I checked the synopsis of ‘The City in the Stars’ on Wiki. There was no mention of any such bar in the synopsis. Was I imagining it? Somebody asked Moorcock about the book on his website. He said that there were two versions, one shorter than the other. Curioser and curioser….

Sorry – that should be ‘The City in the Autumn Stars.’

@Fletcher – August Derleth was an excellent writer and he did a great job of continuing on with the spirit of Holmes.

Check out an issue or two of my Solar Pons Gazette over at http://www.SolarPons.com to get a feel for him. “Why Solar Pons” in the very first one helps explain why Pons is more than just a carbon copy of Holmes.

@Aonghus – I remember almost nothing of that sequel other than I didn’t like it. So I don’t recall the bar part at all.