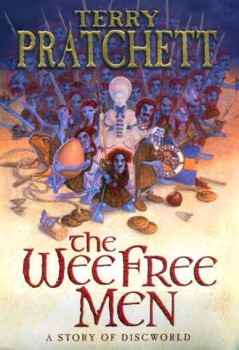 The death of Sir Terry Pratchett hit me hard.

It’s a strange thing, to mourn a man you’ve never met in person, but in truth he’s had more impact on my life than many people I’ve spent a lot more time with.

My first encounter with him was in 1995. I went to a small high school called the Indiana Academy for Science, Mathematics and the Humanities (along with fellow Black Gate blogger Andrew Zimmerman Jones), and my group of friends were all obsessed with Sandman. This was the final year of its regular publication, and we had weekly pilgrimages down to the comic shop to see if the latest issue was in. Someone showed up in the lounge one day with a copy of Good Omens and said “The guy who writes Sandman wrote this too! With some other guy.”

Later, when I was a practicing witch (I’ve led an interesting life. Sometimes I wonder what I’ll tell the children.) the coven I was a member of owed more to Terry Pratchett than to, say, Starhawk. Granny Weatherwax was our patron saint, and the kind of magic I learned had more to do with her than any other twentieth century influence.

In short, since I was sixteen, Pratchett has been one of the languages I spoke. In the way of all literate societies, quotes and reference makes up a large portion of our patois. Pratchett was as much a part of our cant as Latin derived terminology, and there is no way on earth you can convince me that scientists won’t eventually find a way to quantify Narrativium.

Of course, he wasn’t the only author or creator to fill that space in my life.

I’m a girl who grew up closing her eyes and walking into closets hoping to feel pine needles instead of drywall. I was a decade too late to hope for a letter from Hogwarts, but I’ve never entirely given up hope of seeing a unicorn once before I die. I owe if not my life then my mental health to Charles de Lint, whose Jilly Coppercorn gave me hope when I had little to spare.

And that’s where the truth of it lies, and I suspect why we all read this site. We know that stories are more than just stories, and a book is never just a book. We are made up of stories: the ones we tell, the ones we love, and the ones we read. It’s more than just a metaphor: research suggests that our very consciousness is a story our brain is telling itself in order to organize the never-ending stream of data that floods it.

So what does it mean to mourn an author? Part of it is, obviously, regretting the cessation of their work. There’s another Tiffany Aching book coming our way, but after that there will be no more books by Sir Pratchett. And that alone makes me terribly sad. But that isn’t it, or isn’t all of it. When an author – when a storyteller – dies, we lose the act of creating that they do, not just the creation. If stories make up so much of our lives the storytellers are what we have left of real magicians.

In short, we grieve because we love the world a little more because of the storytellers it has in it, and when one is lost we lose that particular glamor. I don’t want to say the world is dimmer because of it: there will be other storytellers, and at least one of them will be every bit as funny and brilliant as Sir Pratchett was. But none of them will be funny and brilliant in just the same way. We have lost that particular set of eyes to see the world with, and we will miss them.

” If stories make up so much of our lives the storytellers are what we have left of real magicians.” – This is so true. His passing left me with a sense of grief I seldom feel about people I’ve never actually known. But he was a wizard of the first order, and I’ll miss his magic.