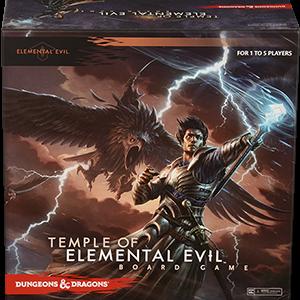 The Temple of Elemental Evil, written by Gary Gygax and Frank Metzner and published by TSR in 1985, is considered one of the greatest RPG adventures ever created. When Dungeon magazine ranked them in 2004, on the 30th anniversary of the Dungeons & Dragons game, The Temple of Elemental Evil was voted the 4th greatest D&D adventure of all time. In his 1991 history of role-playing games, Heroic Worlds, Lawrence Schick wrote “If you like huge classic dungeon crawls, this is probably the best of the lot.”

It has seen several incarnations since its original release, including a Fourth Edition re-release of the first chapter, The Village of Hommlet, and a popular computer game version, developed by Troika Games and published by Atari. It remains the only computer game ever released set in Greyhawk.

Now Wizards of the Coast is converting this grandaddy of all dungeons crawls into a board game, to be released in April of this year. Here’s the description from the WotC website:

In the Temple of Elemental Evil board game, you play as a heroic adventurer. With amazing abilities, spells and magic weapons, you must explore the dungeons beneath the Sword Coast where you will fight monsters, overcome hazards and find treasure. Are you ready for adventure?

The Temple of Elemental Evil board game features multiple scenarios, challenging quests and cooperative game play designed for 1-5 players. The contents can also be combined with other D&D Adventure System Cooperative play board games, including The Legend of Drizzt and Castle Ravenloft.

The Temple of Elemental Evil board game is part of the Elemental Evil product line launched earlier this year, as reported by Andrew Zimmerman Jones in his Jan 24th article “Elemental Evil Attacks Dungeons & Dragons.”

We don’t have a lot of additional details on the rules, but WotC did release this pic of the box contents, which look very promising: 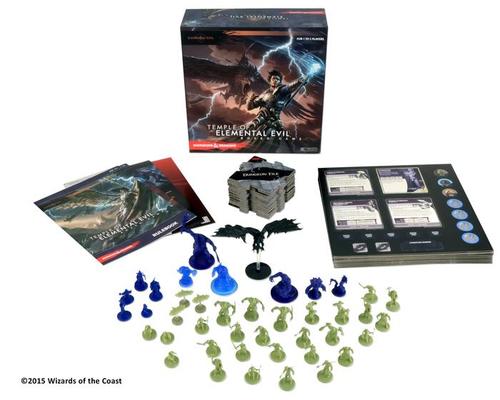 We’ve covered The Temple of Elemental Evil and its various reprints before, most recently in the following articles:

Wizards of the Coast has released several D&D board games, including:

Temple of Elemental Evil will be published on April 30, 2015 by Wizards of the Coast. The retail price is $64.99. See more details at the WotC website.

Castle Ravenloft, Legend of Drizzt, and Wrath of Ashardalon are also part of the D&D Adventure System cooperative play games, which means that they can be used together with Temple of Elemental Evil. I only own Legend of Drizzt, so haven’t actually combined any of the games and can’t speak to how this works in practice, but am looking forward to trying it out when Temple of Elemental Evil arrives!

I bought a copy of Wrath of Ashardalon back in 2013, after getting a review copy of Legend of Drizzt and being very taken with it. I haven’t tried combining the games, but I really want to.

Thanks for the tip about this game, by the way… I first heard about it in your Jan 24 ELEMENTAL EVIL post!

I have Legend but haven’t played it. Our group has played Wrath at least a half dozen times. It’s fun.

Definitely a grind and we made a few house rules to make it a little easier.

I love games with minis. I have a friend who paints them up. I paint minis but not as good. It’s hard to paint them when you don’t have thumbs. He painted up my Talisman figures and the Cthulu figures from the Arkham Horror games. Very cool.

This makes me want to roll some dice!