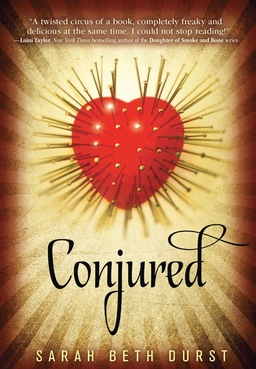 Conjured defied nearly all my expectations. That’s part of what makes it awesome.

Alas, one of my expectations was that it would be the first volume in a series. It’s strong enough to have carried that work, and then some. Instead, the book turns its final twist with a near-audible click, and we must leave its characters for good.

I need to tell you about it anyway.

My copy of Conjured came to me in a big bag of freebies at the World Fantasy Convention. Most of the books in that bag were first volumes in series, given away to promote the later volumes. When I gave each book a one-page chance to catch my attention, this was the story that wouldn’t let me go.

Eve can’t put together a coherent memory of the crimes she witnessed, or much else about her past, but the FBI must find the killer she escaped from. She knows she’s the only victim who ever escaped. She knows he wants her back. Nothing else she remembers fits the life she’s living now in the Witness Protection Program.

She’s as big a mystery to herself as her former captor is to the FBI. Why, she wonders, does she know what pizza is, but not how to unbuckle a seat belt?

As she tries to navigate daily life, pretending to be an ordinary teenager with an ordinary summer job in suburbia, she’s shocked again and again by the alienness of what she encounters — or by her alienness in our ordinary world. In addition to her difficulties remembering her life before Witness Protection, Eve has to contend with fugue states from which she emerges to discover she has lost days or even weeks. She encounters characters who mistake her perplexity for stupidity, but she runs deeper than anyone knows. It’s a pleasure to watch her tinker with the puzzle of her own mind.

And then there’s the puzzle of her magic. At first, Eve doesn’t know she has magic, and over the course of the book, she has to find out by experiment what its limits and applications are. Its price makes itself felt from the first time, though: every working hurls her into unconsciousness, followed by memory. This is a dangerous novel to be unconscious in. Menacing forces are on the move. Remembering her time with the serial killer is dangerous, too. Those memories work on a dream logic so lyrical, Eve struggles to separate out information she can trust from her own mind’s efforts to make beauty out of suffering.

Since Conjured is a YA novel, there must be a love interest. Fortunately, Zach is a delightful character in his own right, a kind and imaginative boy who has read far too much. He’s reshelving books at the local library, actually doing the summer job Eve pretends to do. Zach is quick-witted, and sees right away that she has some kind of secret. Though his is of another kind, he has a secret of his own, one that will drive him to moments of impressive daring. He’s almost imaginative enough to predict the massive weirdness of Eve’s backstory. What he does with that knowledge astonished me again and again.

Whatever you imagine Eve’s backstory to be from chapter to chapter, I assure you, it’s weirder than that. And once it’s revealed, Sarah Beth Durst begins to play with the implications of that weirdness, and then it gets weirder still.

Although Durst has included a couple of YA elements that seem to be mandatory — the love triangle, the gossippy and menacing clique of fellow teenagers — she warps those elements so much by combining them with the other things she’s doing, I found I didn’t mind their familiarity. This is, after all, a book about the alienness of the familiar and the familiarity of the alien. A few standard tropes are part of the art. And for all that the thread of horror truly is horrifying, the final effect of the story is joyful, redemptive, and fun.

Fun may seem too innocent a word for a story with a serial killer in it, but part of what Durst is up to here is examining what of innocence can survive the experience of horror.

In that sense, Durst does the most important work a writer can do. Not every reader will need this book, though I think any reader who likes the sound of a fantasy thriller will enjoy it. But there are readers out there who do need it, readers who will look back on Conjured as the novel that saved them. It goes into the dark places with honesty about the darkness and –here’s the rarer thing — it comes back out again with honesty about the light. That it does so in images and language that juxtapose the mundane with the gorgeously uncanny is what gives the book its extraordinary power.

If you know of a young person who has reason to doubt that it’s possible to make a joyful life after terrible things happen, put this book on your list of gifts to consider when you’re lying awake at night wondering how you can help. It’s strong medicine. Administer with care.