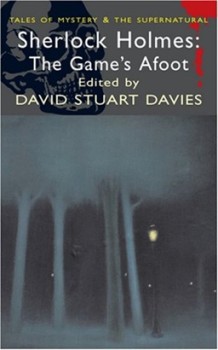 Our fearless leader, John O’Neill, has been reviewing entries in Wordsworth’s Tales of Mystery & The Supernatural series: with emphasis on the supernatural end. So…I figured I’d look at one of the mystery entries.

Sherlock Holmes: The Game’s Afoot, offers twenty new tales of the world’s first private consulting detective. The real mystery is why I couldn’t find a single reference to this book anywhere on Wordsworth’s website. Curious, indeed.

Sherlockian pastiches are meant to emulate the style of Sir Arthur Conan Doyle’s original tales. As opposed to parodies, which spoof Holmes.

With the explosion of self-publishing, the quality of pastiches has come to vary wildly. There is quite a bit of dreck out there and the days of buying every Holmes story listed on Amazon are long gone.

One title that jumps out immediately is Christopher Sequeira’s “The Return of the Sussex Vampire.” Relatives of Bob Ferguson are dealing with another vampire-type problem. 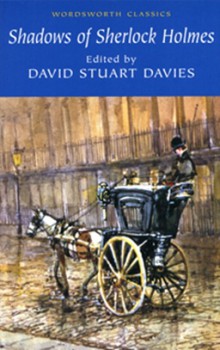 Perhaps my favorite was Mark Valentine’s “The Adventure of the Green Skull,” which frames the story with the ubiquitous match girl of Victorian London. Valentine edited a couple of the other entries in this series of anthologies, including this one reviewed by John.

I was particularly pleased to discover Matthew Elliot’s “The Adventure of the Hanging Tyrant.” He and I were fellow columnists for Sherlock Magazine when David Stuart Davies was the editor. In this tale, he has written a sequel to Doyle’s “The Adventure of Wisteria Lodge.” That is the only sequel to that story which I have read and I’d buy this book for that one alone.

The book also contains two Christmas tales, which are always nice to read during the season.

As with every collection of Holmes pastiches, not every one of these twenty stories is a home run. A few aren’t even a double. But on the whole, I enjoyed this anthology and have read it more than once.

And since we’re mentioning Wordsworth, there’s another anthology edited by David Stuart Davies that you might be interested in: The Shadows of Sherlock Holmes. It is a collection of mystery stories written around the same time as Doyle’s Holmes tales.

There were a lot of mystery authors in Victorian and Edwardian England who wanted to be as successful as Doyle was. Shadows has stories by Edgar Allen Poe, Guy Boothby, Jacques Futrelle (who perished in the Titanic disaster), E. W. Hornung (he married Doyle’s sister), Grant Allen, and more.

[…] Today over at Black Gate, I look at a Sherlock Holmes entry in Wordsworth’s ‘Tales of Mystery & Suspense’ series. There are some good stories in this collection, helmed by my editor at Sherlock Magazine. […]

Fascinating. I went on a search for good Sherlock pastiche and I couldn’t find any source that definitively separated the good from the bad. Is there one?

I know there’s a fair consensus among Robert E. Howard fans about which Conan pastiche are worth a read. Is there such a thing among Sherlock fans? For instance, how do the ones authored by his son hold up? Is there a “must read” of a dozen pastiches or so that really nail it?