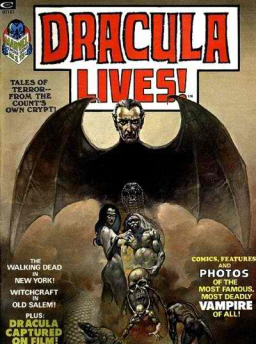 Dracula Lives was Marvel’s black and white companion title to the award-winning Tomb of Dracula monthly comic. As a magazine, Dracula Lives was exempt from the strictures of the Comic Code Authority, allowing for more violence and adult themes than would have been possible in the comic at the time. From the magazine’s launch in 1973 with a stunning Boris Vallejo cover displaying voodoo imagery and undead nudes, readers knew they were in for something decidedly different.

Issue #1 gets underway with the excellent “A Poison in the Blood.” Gerry Conway’s contemporary tale of Dracula in New York, suffering from withdrawal after drinking the tainted blood of junkies easily measured up to the high standard set by Marv Wolfman in the monthly comic series. Assigning the monthly’s art team of Gene Colan and Tom Palmer the artistic chores for the story only reinforced the fact that what was to follow would be every bit as good as the award-winning parent series. More importantly, “A Poison in the Blood” began the Cagliostro story arc which would weave its way through history in subsequent issues.

Roy Thomas’s “Suffer Not a Witch” is the first historical tale and also the first Dracula story to team Thomas with artist Dick Giordano. The pair would later embark on a celebrated adaptation of the original Stoker novel. “Suffer Not a Witch” steers the series into Nathaniel Hawthorne territory with the Lord of Vampires visiting 17th Century America and becoming embroiled in the conflict between hypocritical Puritans and the persecuted witches.

The first issue concludes with Steve Gerber’s “To Walk Again in Daylight,” illustrated by Pablo Marcos. This 18th Century tale set in Vienna is well done, but the central concept (Dracula is seeking an alchemical cure from vampirism) contradicts the established continuity for the series and flies in the face of Marvel’s portrayal of the Lord of the Vampires as a truly Satanic unrepentant figure who embraces evil for his own sake. 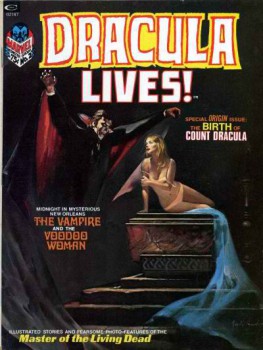 Issue #2 kicks off with the epic “That Dracula May Live Again.” This is the origin story by Marv Wolfman, showing the historical Vlad Tepes’s transformation into a vampire in 15th Century Wallachia. The artwork by Neal Adams is simply a thing of beauty.

“The Terror That Stalked Castle Dracula” by Steve Gerber and Tony Isabella is an entertaining World War II tale of the Nazi occupation of Romania. The story presents some difficulties reconciling the narrative with the established Marvel continuity for the character, but is otherwise enjoyable. Jim Starlin’s artwork is disappointing only because he fails to distinguish himself by achieving his usual high standard of work.

“The Voodoo Queen of New Orleans” by Roy Thomas is a more traditional contemporary tale involving Dracula’s encounter with Marie Laveau. Gene Colan and Dick Giordano’s artwork makes for a peculiar blend as both men’s styles are easily identifiable but fail to create a cohesive whole. Laveau will later be portrayed with more prominent African-American features in later stories. 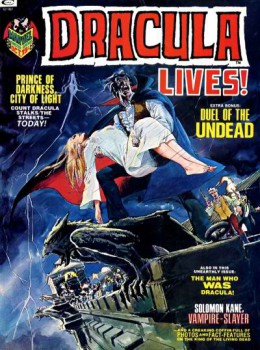 Issue #3 is graced with an excellent Neal Adams cover depicting Dracula standing atop a castle’s stone gargoyle with a swooning blonde in his arms, while a storm rages all around him. The first story, Marv Wolfman’s “Lord of Death, Lord of Hell” continues Dracula’s 15th Century origin tale. Regrettably, John Buscema replaces Neal Adams and the results are jarring – no more so than the splash page of the newly-risen Dracula nude, raging at his fate, looking exactly like a bathing hippie at Woodstock. The subsequent pages offer an improvement in art and, at times, Buscema’s work appears nearly identical to Adams. The sequence where Dracula spurns the advances of the seductive vampire, Lala, who strips naked before him, rivals anything seen in Marvel’s contemporaneous Savage Sword of Conan. The battle to the death with Nimrod is riveting and climaxes in Dracula usurping Nimrod’s title as Lord of the Vampires.

Gerry Conway’s “Shadow in the City of Light” is the contemporary tale set in Paris that continues the Cagliostro storyline. The authentic Paris architecture and surprisingly realistic depiction of a French heroine with actual Gallic features help elevate this tale of a living gargoyle. The story’s best purpose is to advances us toward the inevitable conflict between Dracula and the reincarnated Cagliostro. 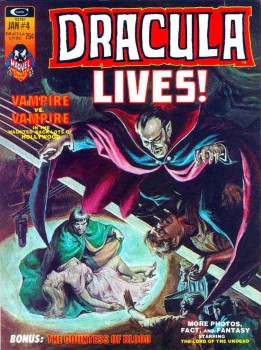 Issue #4 kicks off with Marv Wolfman’s “Fear-Stalker,” a contemporary tale illustrated by Mike Ploog that sees the vampire interrupt a Hollywood production of a campy Dracula movie called “The Fangs of Dracula.” Wolfman’s script offers an amusing satire with its washed-up alcoholic horror star and other lowlife Hollywood bottom-feeders whose lives are changed (and, in some cases, ended) by their encounter with the real Lord of the Vampires.

“This Blood is Mine” is a retelling of Elisabeth Bathory’s legend by veteran writer Gardner Fox and artist Dick Ayers. Adding Dracula to the story works well enough, but there is no mistaking this is a filler tale despite the talent involved.

Gerry Conway’s “Look Homeward, Vampire” continues the 15th Century origin of Dracula with the vampire lord reclaiming his castle. The climactic battle between a transformed wolf and bat is thrilling. Vicente Alcazar’s artwork rivals Neal Adams at times. The decision to tone down this issue after the excessive nudity (although non-explicit) in the previous issue provides some nice balance. 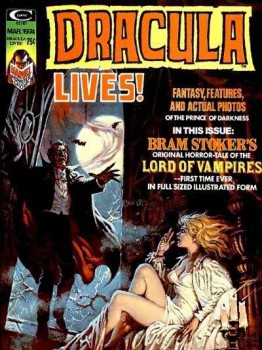 Issue #5 kicks off with the first chapter in Thomas and Giordano’s adaptation of Stoker’s classic novel, climaxing with Jonathan Harker’s introduction to Count Dracula. We covered this leisurely adaptation in more detail in an earlier article, but will mention each installment’s appearance for the purpose of providing a comprehensive profile of the magazine.

Gerry Conway’s “A Duel of Demons” fills in the back-story (at last) of Dracula’s first encounter with Cagliostro in the 18th Century. The story does not disappoint, but it would have benefitted from being extended to several chapters, given the character’s importance in the contemporary story arc playing out over the course of the magazine’s run. A well-written, but all too brief, short story by Conway entitled “Demons in Darkness” fills out the page count.

Tony Isabella’s “Night Flight to Terror” features striking artwork from Gene Colan and Pablo Marcos is the modern story for this issue which sees Dracula an unlikely passenger on a jet liner alongside a madman with a bomb. Despite the excellence of many of the artists who contributed to the title, it is Gene Colan’s distinctive work that defines the legitimate Marvel Dracula. The issue concludes with a short one-page installment from Tony Isabella and Val Mayerik entitled “The Boyhood of Dracula” that draws heavily from Radu Florescu and Raymond McNally’s various studies of the legends surrounding the historical Vlad Tepes. 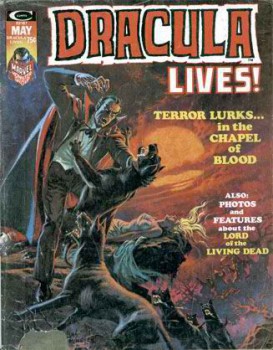 Issue #6 opens with Steve Gerber’s “A Death in the Chapel” with artwork by Gene Colan. This is a modern tale set in Rome that sees Dracula paying a visit to Vatican City in search of the Montesi Formula in a race to stop a vampire-hunting monk who is revealed to be Montesi’s descendant. While Dracula wins the battle, the superb ending makes it clear he is fated to lose the war. Once again, this is an excellent story that would have benefitted from being played out over several installments to maximize its dramatic potential.

The first installment of a short story credited to Thompson O’Rourke (a pseudonym for Denny O’Neil) entitled “Blood Moon” makes its debut in this issue.

“Shadow over Versailles” by Tony Isabella, with art by John Buscema and Pablo Marcos, offers a follow-up to the 18th Century tale of Dracula and Cagliostro. This is a stronger and more substantial story than their first encounter, although somewhat muted by being a rematch and lacking the impact of their momentous first encounter.

Chapter Two of Thomas and Giordano’s adaptation of Stoker’s Dracula completes the issue, climaxing with Jonathan Harker spying Dracula scaling the walls of his castle upside down like a bat. This is an iconic image that appears in too few adaptations of the classic novel. 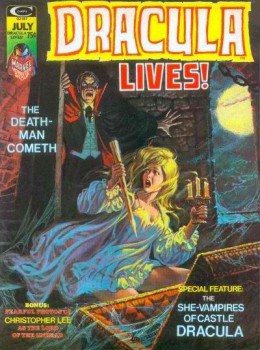 Issue #7 kicks off with Gerry Conway’s “Here Comes the Death Man,” featuring the superb art of Vicente Alcazar in this contemporary tale of Dracula on the loose in Washington DC. This one mixes elements of a spy thriller with dark horror. Alcazar’s artwork recalls Fernando Fernandez’s realistic interpretation of the Stoker novel for Warren Publication’s Creepy.

Mike Friedrich’s “Assault on a She-Pirate” was the latest installment of the historical adventures of the Vampire Lord. This swashbuckling tale betrayed the influence of Robert E. Howard with its compelling she-pirate heroine who is every bit as alluring as she is dangerous.

Chapter Three of Thomas and Giordano’s adaptation of Stoker’s Dracula rounds out the issue, concluding with Jonathan Harker’s realization that he is not intended to leave Castle Dracula alive and that the curse of the vampire is about to spread to his beloved England.

Next week’s article will examine the final seven issues of this classic comic magazine.