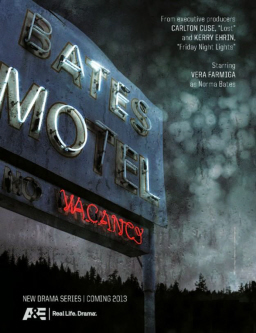 Normally, I’d be prone to bust on this, but either the holiday season has taken a little edge off my snark, or this is actually kind of a cool idea.

This week, A&E released a featurette to promote its upcoming mini-series / prequel Bates Motel. Looks like we’re finally going to find out how Norman became psycho and got his mother fixation.

Freddie Highmore, the adorable little moppet last seen in Finding Neverland and Tim Burton’s Willy Wonka and the Chocolate Factory, has grown up quite a bit and takes on the role made famous by Anthony Perkins, as a teenager this time; with Vera Farmiga (George Clooney’s love interest in Up In the Air) portraying Norman’s eventually-mummified-Mom, “Norma.”

A&E joins NBC in bringing another monstrous movie murderer to the small screen to more closely examine what makes him tick. Similar to what Bryan Fuller’s upcoming Hannibal series plans to do with Hannibal Lecter, A&E’s Bates Motel will focus on young Norman’s serial killer psyche and how his backstory turned him into what he’s most known for cinematically.

“Norman has been through a lot. He’s a sensitive boy,” Norma Bates can be heard to say in the new promo. We get a glimpse of Norman fraternizing with some of his female classmates (before Mother put a stop to that) and displaying an early eeriness.

It also looks like we discover where Norman got the idea to hide bodies in the lake behind the hotel. The cast seems especially enthusiastic about the writing talking about crazy turns, suspense and emotional characters, and the music sets a sufficiently ominous mood.

See for yourself with the full trailer, after the jump.

Bates Motel will premiere on A&E in March 2013, just about the time cabin fever is making us all feel a little Norman-ish.