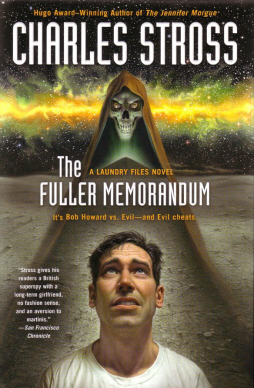 Charles Stross is the technocratic heir to H.P. Lovecraft. While he is probably best-known for his Singularity-inspired science fiction and has been known to dabble in committing the occasional fantastic indiscretion with his Merchant Princes series, Stross is unequivocally at his best when he combines his techno-savvy competence with unadulterated occultic horror. The Fuller Memorandum is the third of his Laundry series, which centers around the deeds of a British agent named, significantly enough, Bob Howard, who works for a branch of the English Secret Service in confronting evils that are much more dark and dangerous than anything James Bond ever had to face.

Having triumphed over die-hard trans-dimensional Nazis and grandiose villains with master plans, Bob and his wife Mo are forced to confront an evil, world-threatening plan to awake and unleash the demonic Eater of Souls in The Fuller Memorandum. The plot is convoluted and the squamous horror is amped up to eleven, as the strain of being forced to deal with the implacable darkness beyond the borders of our universe as well as the soul-crushing bureaucracy of the agency are beginning to wear heavily on both of them.

Style: 3 of 5. Stross indulges in what has become his customary literary pyrotechnic in this series, by which I mean his imitation of a different thriller writer’s style in each different Laundry novel. Just as The Atrocity Archive was written in the mode of Len Deighton and The Jennifer Morgue was a homage to Ian Fleming, The Fuller Memorandum is written in the style of Anthony Price. Not having read Price, this escaped me; the convoluted, Soviet-centered nature of the plot left me with the vague impression that Stross had Le Carre in mind. This is a clever mechanic, and if Stross is not always entirely successful in this regard, it nevertheless prevents the books from being repetitive. However, the insistence on techno slang feels somewhat forced in this book — jesusphone for iPhone, for example — and the internal monologue is often on the melodramatic side. One could perhaps object to the depth of the historical expositions from a stylistic perspective, but I found them far too interesting and necessary to mind in the slightest.

Story: 4 of 5. Deep, dark, twisted, and idiosyncratic, the plot of The Fuller Memorandum never releases its eldritch grip upon the reader for a moment. Despite the convoluted nature of the story there are few surprises; what on television would surely be set up for a dramatic shock is instead signaled well in advance. But this works well, as forcing such a detailed and historically rich storyline to rest on so hackneyed a trick as a surprise unveiling would be as cheap as it is unnecessary. Stross first piles layer upon layer, then expertly peels them away in such a fashion as to heighten the tension and fully engage his reader.

Characters: 3 of 5. Bob Howard is likeable and amusing, as before, but his indefatigable irony begins to wear a little thin in this, the third book. Stross seems to want to show how the pressures of his job are beginning to weigh on Howard without giving up the snarkish and juvenile commentary that provides the Laundry novels with their comedic edge, and the results tend to whipsaw between excessive and inappropriate levity to excessive and heavy-handed melodrama. Stross also permits his own views on politics and religion to intrude in such a way that tends to somewhat breach the fourth wall; fortunately he keeps the preachiness and the cheap shots to a minimal level that is unlikely to eject the reader from the story for more than a moment or two.

Originality: 5 of 5. No one really does it like Stross and it is certain that no one does it better. The very few writers that can be reasonably compared with him simply do not compare well, as his grasp of technology combined with his depth of research into matters historical and occultic make his works unique on several levels despite their ostensibly derivative nature. One simply never knows what to expect when one approaches one of Stross’s Laundry novels, except that one is in for an experience that is like no other in literature. Stross accomplishes the near-impossible in combining genuine humor with dark philosophy that underlines the darkness that infests the human soul.

Overall: 8 of 10. The Fuller Memorandum isn’t quite as mind-blowing as The Atrocity Archive, but it is a stronger and more coherent novel than its predecessor, The Jennifer Morgue. It is one of the best novels to be published in either the science fiction or the horror genres in the last three years, and I highly recommend it without reservation to the readers of Black Gate. The adventure is more intellectual and conceptual than the pure adventure fiction to which Black Gate is devoted and there is no escapism or escaping the darkness in this brooding Lovecraftian nightmare, but The Fuller Memorandum is esoteric thriller fiction at its best.

You know something? I hate writing. I keep having to distract myself, hence all the little jokes. It’s actually not as if the job is all that funny, when you get down to it. Especially as I have to write everything either in longhand or on a 1962 Triumph Adler 66 manual typewriter, and burn the ribbons and carbon papers afterwards in the Security Office incinerator in front of two witnesses with high security clearances. I’m not allowed to use rubber bands or paper clips to hold the papers together (although string and, ye horrors, traditional red sealing wax—and don’t get me started on how difficult it is to melt the stuff in a smoke-free building with fire detectors in every office—is permitted). My fingers are hard-wired for the Emacs programmers’ editor and a laptop; this historic office reenactment stuff gets old real fast. But I digress.

This is the story of how I lost my atheism, and why I wish I could regain it. This is the story of the people who lost their lives in an alien desert bathed by the hideous radiance of a dead sun, and the love that was lost and the terror that wakes me up in a cold sweat about once a week, clawing at the sheets with cramping fingers and drool on my chin. It’s why Mo and I aren’t living together right now, why my right arm doesn’t work properly, and I’m toiling late into the night, trying to bury the smoking wreckage of my life beneath a heap of work.

It’s the story of what happened to the Fuller Memorandum, and the beginning of the end of the world.

Are you sure you want to carry on?

I’ve only read a short story that he set in this series; holiday-related if memory serves. I enjoyed it a lot. I’ve purchased all three of the books, but haven’t had a chance to read them yet. Given the 1000+ books in my library about which I could say the same thing, no telling when I’ll actually get to them.